KCNQ2. I have to admit we have not written about KCNQ2 for a while, which does not do justice to the role of KCNQ2 in human epilepsies. KCNQ2-related epilepsies represent some of the most common genetic epilepsies and almost exclusively present with neonatal seizures. Historically, KCNQ2 was identified in families with self-limiting neonatal seizures. Subsequently, disease-causing variants were also identified in neonatal developmental and epileptic encephalopathies (DEEs). While self-limiting epilepsies were attributed to protein-truncating variants, KCNQ2-related DEEs are attributed to dominant-negative variants. However, as in many other DEEs, this conceptual black-and-white distinction is somewhat oversimplified, and the genotype-phenotype correlation in KCNQ2-related disorders is more complex. In a recent study, we assessed a total of 81 KCNQ2 variants’ functional effects in parallel, leading to some unexpected results about the function of disease-related KCNQ2 variants. Here is what this first large-scale electrophysiological analysis of an epilepsy-related ion channel told us. 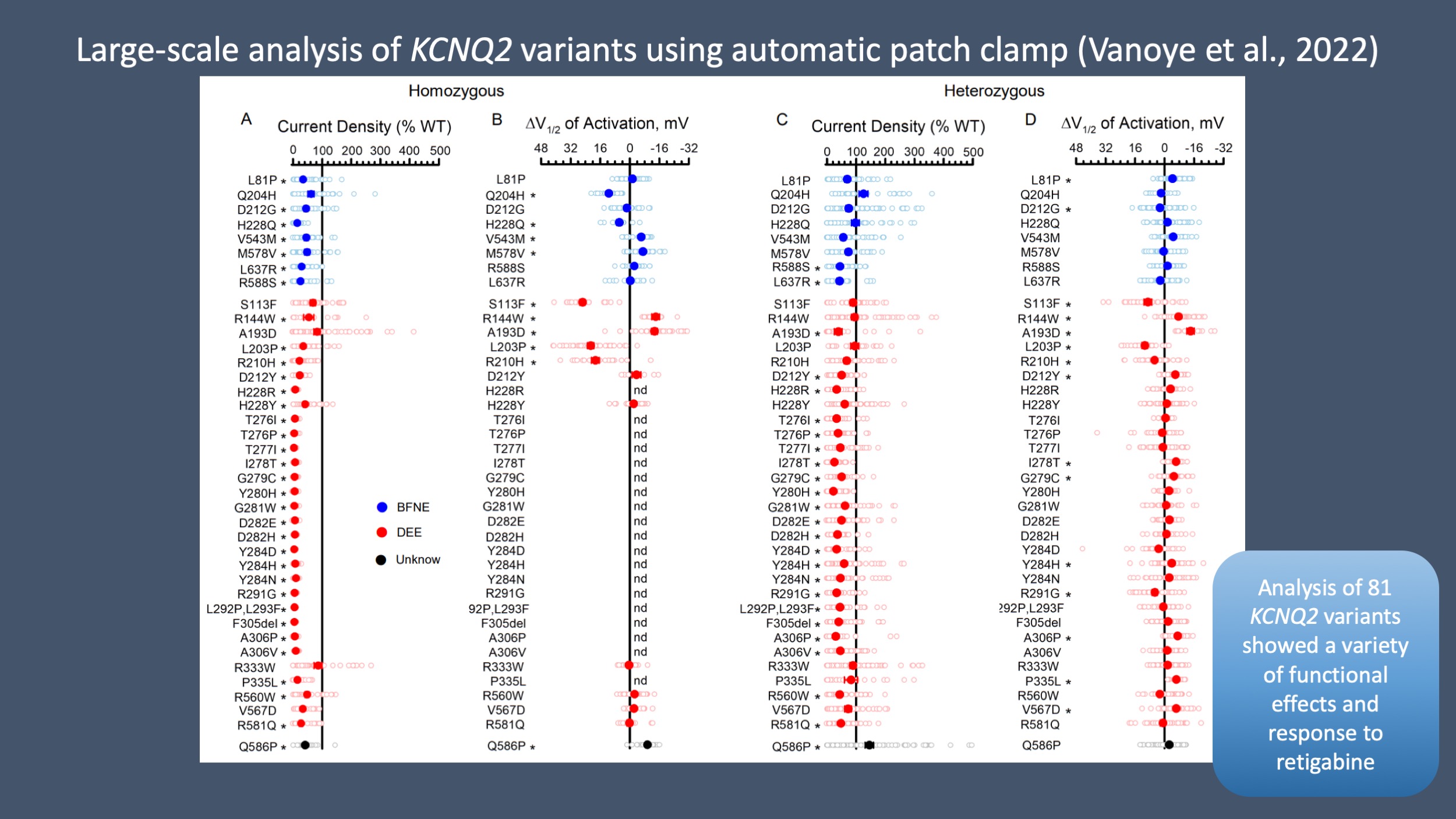 The analysis bottleneck. While genomic sequencing and genetic analysis is streamlined and can be performed at scale, functional analysis of known or putative disease-causing variants is lagging behind. In many genetic causes for human epilepsies, analysis of specific variants can only be performed one variant at a time – this inadvertently creates a bottleneck where the vast majority of disease-causing variants in a specific gene are unstudied. For some genetic epilepsies, this lack of functional characterization is not a major obstacle to treatment at first glance. In Dravet Syndrome, for example, it can be reasonably assumed that most variants resulting in a typical Dravet Syndrome phenotype are loss-of-function variants. However, even this assumption may be misleading – there is now an increasing awareness of more complex functional alterations in Nav1.1 such as gain-of-function variants resulting in early-onset developmental and epileptic encephalopathy or hemiplegic migraine. And the situation is even more confusing in conditions with multiple pathogenic mechanisms, such as SCN2A-related disorders where both gain-of-function and loss-of-function alterations are known.

Beyond gain and loss of function. Disease-causing variants in ion channels are the most common genetic cause of human epilepsies. These channelopathies are the quintessential paradigm on how genetic variation leads to altered protein function resulting in epilepsy. Accordingly, channelopathies are also the natural first candidate to assess the spectrum of functional alterations within a given disease gene. We know from our studies in SCN2A and SCN8A-related disorders that knowledge of the precise functional alteration helps conceptualize phenotypic subgroups and precision medicine treatments. However, the more we zero in on the precise phenotypes and functional alteration, the more diverse phenomena we find. For example, the most common recurrent variant in SCN2A, the p.R853Q variant, cannot be neatly classified as a strict gain- or loss-of-function variant. Accordingly, with increasing scrutiny with respect to functional changes, we start to realize that our vocabulary with respect to gain- and loss-of-function is overly simplified.

CWOW and FENICS. Jointly with many research groups in the US, we are part of a NINDS Center Without Walls (CWOW), the Channelopathy-associated Epilepsy Research Center (link), a multi-institutional and interdisciplinary research center that combines high-throughput technologies on non-neuronal cells with studies of human neuron and animal model systems. The Center consists of three integrated research projects and two scientific cores involving a mixture of academic and industry scientists. Within this Center Without Walls, we are developing information and concepts that allow us to carry our knowledge on epilepsy-related ion channels to the next level. We have created a dedicated dictionary to describe electrophysiological changes following the tradition of classical biomedical ontologies (FENICS) and we are assessing epilepsy-related variants with new technologies, such as high-throughput electrophysiology. Now, our first flagship publication by Vanoye and collaborators has been published in JCI Insight, assessing an unprecedented number of variants in KCNQ2. As mentioned above, despite the initial assumptions about clearly delineated disease entities, KCNQ2-related disorders are more complex and provide a first insight into how variant analysis at scale may help us understand this condition at a more granular level.

KCNQ2 at scale. In the publication by Vanoye and collaborators, we assessed a total of 79 missense and 2 inframe deletion KCNQ2 variants through automated patch clamp analysis and assessed the response to retigabine, a potassium channel opener. The functional results obtained through automated patch clamp analysis in 18 known pathogenic variants with prior functional data matched previous experiments, affirming that automated patch clamp is a mature and ready-to-use technology to assess disease variants at scale. Most disease-associated KCNQ2 variants showed loss-of-function with dominant-negative effects that did not clearly distinguish between self-limiting neonatal seizures and KCNQ2-related DEEs. This finding calls into question the prior assumption that self-limiting neonatal seizures and KCNQ2-related DEEs are always aligned with distinct functional consequences. In fact, dominant-negative effects appear to be a much more common disease mechanism of missense KCNQ2 variants across a range of mild and severe phenotypes.

Retigabine. The scalability of the automated patch clamp analysis also allowed us to assess the response to retigabine, a known potassium channel opener. While all variants responded to retigabine to some extent, there was significant difference between variants. Some variants showed a strong response to retigabine, but other variants only showed little response. These findings are critical as they emphasize the heterogeneity of treatment responses when precision medicine strategies are used. Not all variants in epilepsy-related ion channels may respond to the same strategies, and assessment of the specific response in each variant is critical when trying to come to a general conclusion on whether a certain strategy is successful. This is true for KCNQ2 and retigabine as well as SCN2A/SCN8A and sodium channel blockers.

This is what you need to know. As of 2022, “Ephys has gone Omics” and large-scale assessments of ion channel function across a wide range of disease-causing variants is no longer impossible. In this flagship paper of our Center Without Walls, we assessed a total of 81 KCNQ2 variants functionally in parallel with implications for precision therapy for KCNQ2-related epilepsies. We demonstrate that dominant negative effects are more common than previously expected across a wide range of phenotypes and that response to the potassium channel opener retigabine differs across the disease-causing variants in KCNQ2. The publication by Vanoye and collaborators is a first important step in scaling up functional studies in ion channel variants implicated in epilepsy, allowing us to slowly match the throughput of functional studies with the increasing amount of genetic information. Jointly, both will help us to better understand how genetic variation, functional consequences, and phenotypes interact – helping us to find more and better precise therapies for individuals with genetic epilepsies.