VUS – The dreaded variant of uncertain significance. With the advent of next generation sequencing panels and exome sequencing, what used to be an occasional laboratory finding in epilepsy has now become a daily occurrence. Lab reports detailing multiple VUS findings for an individual patient have become a routine part of clinical practice. How do you, as a healthcare provider, explain the meaning and implications of VUS findings to patients and families in a way that is understandable to them? 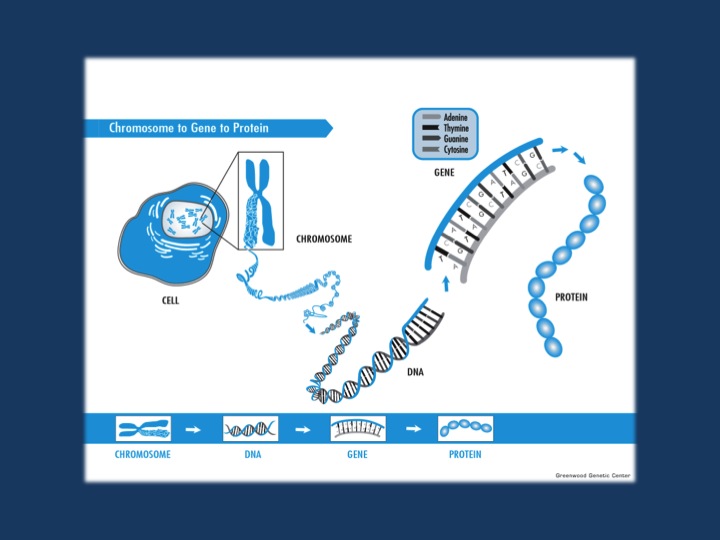 Illustration of the relationship of chromosomes, genes, DNA, and proteins, provided by Greenwood Genetic Center (http://www.ggc.org).

First things first. Ideally we explain general genetics concepts, such as genes, chromosomes, DNA, and variant interpretation/classification to our patient’s families* PRIOR to testing as part of an informed consent process, and, by the time results are reported by the laboratory, the idea of a VUS is already anticipated as a possibility. Informed consent for genetic testing is good clinical practice. Many U.S. states have legislation in place regarding the manner in which the consent is obtained and documented. Even if you did have a detailed conversation with your patient’s parents, and especially if you did not, you’ll need to start at the beginning if your patient’s parents are going to have a good understanding of their child’s test result. Otherwise I promise you that although they may nod and pretend to understand what you are talking about, they will not.

Nuts and bolts. When I meet with families, I spend a fair amount of time explaining basic genetics concepts using illustrations and a healthy dose of metaphors. The level of detail varies depending on how much exposure a family has had to genetics and how much they remember/understand from high school biology but in addition to explaining what genes and chromosomes are, my discussion always touches upon the following basic elements:

I recognize that busy clinicians may not have as much time to delve into explaining genetics as some families need. There are many wonderful, patient-friendly, online resources (check out the NIH’s Genetics Home Reference primer and Genetics 101 from globalgenes.org) and of course there is always the option of referring to a genetic counselor (www.nsgc.org) for pre/post-test counseling. Some insurance companies are beginning to require pre-test counseling with a board certified genetic counselor prior to ordering specific genetic tests, such as whole exome sequencing.

To be or not to be. Ideally, when genetic testing identifies a VUS, parental samples are available for testing and provide information that enables the lab to re-classify the variant. In practice this is often not the case. Globalization, the use of advanced reproductive technologies with gamete donors, and the reduced penetrance/variable expressivity of epilepsy gene variants present major challenges to variant classification. For some variants, such as heterozygous variants for autosomal recessive phenotypes, parental testing will be of no use whatsoever (more on this in the next EpiGC post). Families seeking answers may be very frustrated by what seems like voodoo science, but as providers it is imperative that we resist the temptation to be overly confident in our interpretation of VUS findings. We need to explain in lay terms how variant classification works and the sources of data that it depends upon. By all means give your assessment of whether or not the variant is a “good fit” based on the specific gene, the inheritance pattern, the patient’s phenotype and the family history. But be careful – families need to know that variants may be re-classified and that a year from now you may be calling to tell them that the variant they have been assuming is the cause of their child’s epilepsy is, in fact, benign. Unsatisfying perhaps, but true.

The other shoe. I would be remiss in not including a word or two about my particular pet-peeves regarding the communication of VUS results, or really any medical test results for that matter. With genetic testing, people often make assumptions about a perceived broader scope, and await results dreading that we will tell them news about a life-threatening condition even if their child is relatively healthy. Providers who feel unprepared to discuss VUS results (and who are often equally anxious about communicating them to patients) may drone on in what seem to be incomprehensible ways, thus increasing the family’s anxiety. When communicating a VUS the first words out of your mouth should be planned to set the family at ease. Let them know first that the testing did not identify a genetic diagnosis for their child, and then tell them about the VUS. Remind them that variants are common and that they may be familial and/or benign, like freckles or red hair. Caution them gently about rushing to look up the gene online, and about the broad range of phenotypes they may read about that may or may not be applicable to their child.

This too shall pass. Just as we need to avoid the pitfall of communicating too much certainty to families who may then unknowingly build an identity around what turns out to be an erroneous diagnosis, so too must we avoid communicating that there is no hope for families desperately searching for answers. Even when there may be no miracle cure, the power of a diagnosis is enormous, and repeated uninformative test results over the course of several months or years may take its toll. Connect the families you counsel with genotypic registries and with researchers who can conduct functional studies. Help them to appreciate the many collaborative efforts that are underway to share data, and encourage them to consider participating. Let them know that they should check back every year or so, as the variant will eventually be re-classified and its significance for their child better understood.

* For the sake of brevity and clarity in this post I’m assuming a scenario involving a pediatric patient.