School days, school days, dear old golden rule days. It has been over two decades since I completed my training as a genetic counselor, but there are several families that I will always remember and find myself frequently talking about when I train students or discuss counseling issues with colleagues. One of them was a young couple, both with mild intellectual disability and epilepsy, expecting their first child. 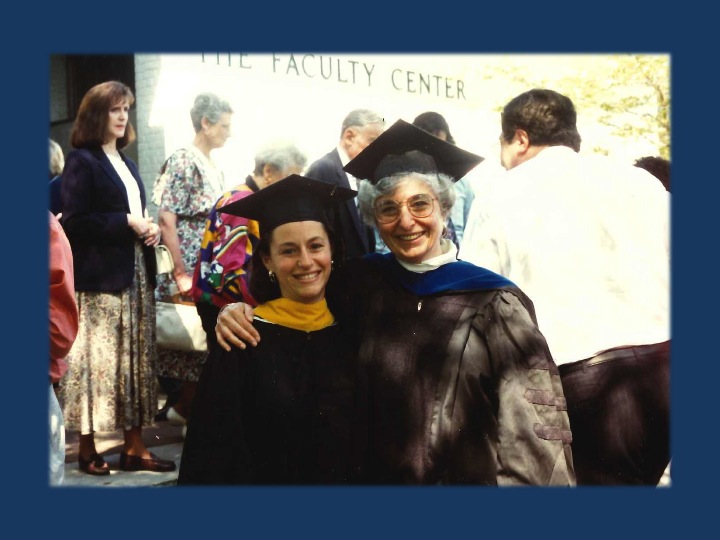 Beth at Brandeis University graduation, with Genetic Counseling Graduate Program Director Judith Tsipis, PhD. This is from 1994 – the first class of genetic counselors to graduate from Brandeis.

Patient Zero. The couple were referred ostensibly to address the potential teratogenic risk of the expectant mother’s AED, but the conversation quickly turned to the family history. Upon reporting his own struggles, the expectant father began to cry, and told us, “if something is wrong with the baby it will be my fault”. The guilt and shame this father to be expressed so openly left me holding back tears as well, but I was also struck by the fact that we had nothing to offer in terms of recurrence risk assessment, beyond the usual platitudes about empiric risk estimates and multifactorial inheritance. At the time, the idea of molecular testing or precision medicine for epilepsy seemed so far off as to be almost science fiction.

Back to the future. After graduate school, a dabble in prenatal genetic counseling and many years specializing in autism, I had my own Marty McFly moment when I joined Boston Children’s Hospital in 2010 and began working with Ann Poduri to launch the first comprehensive Epilepsy Genetics Program. I had my first inkling that change was coming when I began reading the few epilepsy genetics review papers that existed at the time. It took a while to wrap my head around all the seizure types and epilepsy syndromes, and there was the occasional patient with a microarray finding or SCN1A variant that required my attention. The real sea change came with the advent of next generation sequencing panels specific to epilepsy. Suddenly almost every patient we saw was a candidate for epilepsy genetic testing and conversations about the impact of results on medical management and treatment were commonplace. I came to think of epilepsy as epilepsies, and began to contemplate a future in which clinical trials would be designed around genotypes and treatment tailored to an individual’s specific variant. Already the benefits of a diagnosis have become clear – the availability of specific recurrence risk information and preimplantation or prenatal testing, alleviation of parental guilt, reduction of unnecessary or painful tests, and the ability of parents to connect through social media and online support organizations are just a few.

Dark Shadows. Not all is graceful in the universe of epilepsy genetics. Many patients who need testing cannot afford to pay for it, and many insurers will not cover the cost. Navigating the constantly changing menu of testing options offered by competing laboratories is often befuddling to the savviest of clinicians. Interpreting variants from gene panels and exome sequencing is an enormous undertaking. Counseling families about the meaning of variants of uncertain significance, arranging parental testing, explaining how a variant that was reported 2 years ago as pathogenic but now has been re-classified as benign, explaining why, after waiting 6 months for results of the holy grail of exome sequencing we still do not have an answer or have an answer that will not lead to any change in treatment or outcome, communicating rare diagnoses for which no gene specific support or educational resources currently exist – these are some of the many challenges that healthcare providers of families impacted by epilepsy face.

Introducing EpiGC. Just as epilepsy providers and researchers have spearheaded efforts in data sharing and research in recent years, so too has the community of genetic counselors involved in epilepsy genetics begun mobilize to work on shared goals and projects. A small group of us met at the recent AES meeting in Philadelphia, and we have now identified over two dozen genetic counselors specializing in epilepsy genetics in clinical, research and laboratory settings. Collectively we are now known as “EpiGC”. You can learn more about us under the EpiGC tab on the Beyond the Ion Channel homepage, but briefly EpiGC’s goals are to 1) serve as a resource/provide education to the neurology community and advocacy groups; 2) promote the value of genetics and genetic counseling in the clinical evaluation of the patient with epilepsy; 3) promote the use of genetic testing laboratories that utilize the expertise of genetic counselors; 4) advocate for the improved reimbursement of genetic testing for epilepsy. We look forward to working with all of you toward the common goal of integrating genetics as a standard part of epilepsy care for all patients.