The calcium connection. Pathogenic variants in genes encoding voltage-gated ion channels have long been known to cause neurological disorders in people. Dravet syndrome, caused by pathogenic variants in the neuronal sodium channel-encoding gene SCN1A, is one of the most common channelopathies. Although sodium and potassium channels play an established role in childhood-onset epilepsies, the role of voltage-gated calcium channels has been less clear. We have known for over a decade that disease-causing variants in CACNA1A cause a spectrum of neurological disorders, including developmental and epileptic encephalopathies. But evidence of a role for other neuronal calcium channels in epilepsy has been sparse until now. Our publication in the American Journal of Human Genetics now explores the phenotype and functional consequences of de novo variants in CACNA1E, representing a new and unexpectedly frequent disease entity. 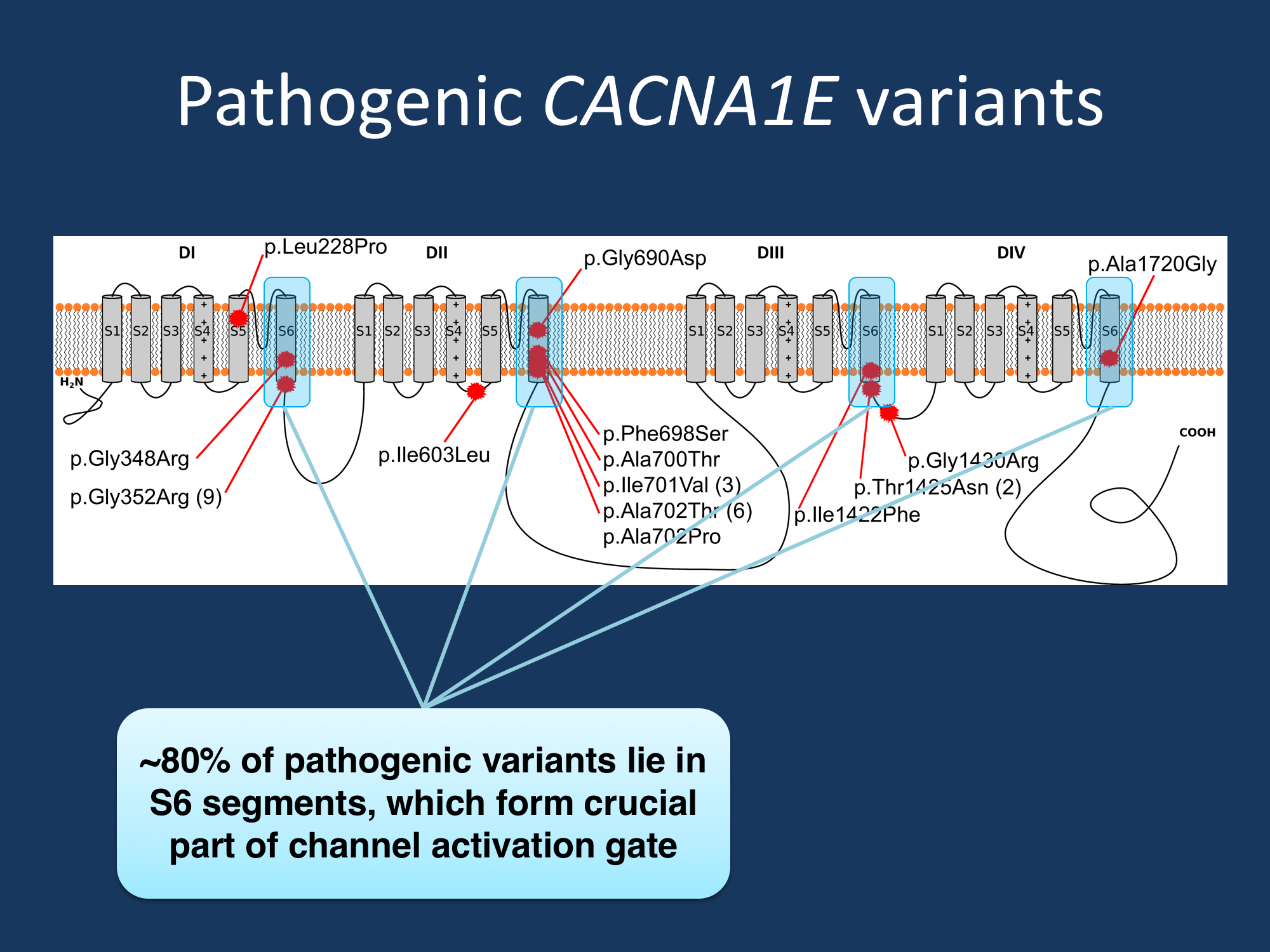 We identified 14 pathogenic CACNA1E variants in 30 unrelated individuals, reflecting the high occurrence of recurrent variants. Three recurrent variants (Gly352Arg, Ile701Val, and Ala702Thr) accounted for 60% of the cohort. Variants highly clustered in the cytoplasmic regions of S6 transmembrane segments of the channel, which form a crucial part of the CaV2.3 channel activation gate.

A new calcium channelopathy. In our publication we describe the clinical characteristics of 30 individuals with de novo missense variants in CACNA1E, the gene encoding the neuronal CaV2.3 channel. Recurrent variants in CACNA1E were common – two recurrent variants Gly352Arg and Ala702Thr accounted for half of the cohort — and the phenotype was severe. Most affected individuals presented in infancy with refractory seizures, most commonly epileptic spasms, and profound developmental impairment. Many patients had joint contractures and macrocephaly, which are not often seen in developmental and epileptic encephalopathies. The fact that we were able to include so many individuals in the first description of this condition suggests that CACNA1E-encephalopathy may be one of the more common genetic epilepsies.

Gain-of-function effects. Our group was able to investigate the functional consequences of several CACNA1E variants. Some variants had been investigated many years ago, before CACNA1E was even suspected to have a role in human disease. All functional studies – ours and previous investigations – showed consistent gain-of-function properties. Altered channels showed facilitated activation, slowed inactivation, and increased current density. Pathogenic variants highly cluster in S6 transmembrane segments, which line the channel pore and form a crucial part of the channel’s activation gate.

Genotype-phenotype correlations. Whether or not we can predict disease course and severity from the genetic change is a frequent question from patients, families, and clinicians. There is some suggestion that this may at some point be possible for CACNA1E. For example, two individuals with the recurrent Thr1425Asn variant had a comparatively less severe outcome in terms of seizures and development compared to the rest of the cohort. Hyperkinetic movement disorders and dystonia were found in all individuals with the recurrent Gly352Arg variant but were not a feature in most of the other patients. All individuals with the Ala702Thr variant had a homogenously severe phenotype, with epileptic spasms, macrocephaly, and contractures. It will be interesting to see if variant-specific phenotypes emerge in future studies.

Possible therapeutic venues. The CaV2.3 channel, encoded by CACNA1E, is a target of the anti-seizure drug topiramate. Although seizures were intractable to all anti-seizure medications in most patients, we did observe that several individuals responded well to topiramate and eventually became seizure free. This was the only medication that had a positive effect in the cohort. Although more research must be done to investigate this observation more systematically, it does suggest that CACNA1E-encephalopathy may be amenable to a targeted therapy.

What you need to know. Pathogenic variants in CACNA1E cause a developmental and epileptic encephalopathy, characterized by onset in the first year of life of refractory seizures and profound developmental impairment, often with congenital joint contractures, hyperkinetic movement disorders, and macrocephaly. Functional analysis suggests a gain-of-function effect of these variants, and many individuals responded well to topiramate, which targets the channel encoded by CACNA1E. Some genotype-phenotype correlations may emerge, as some individuals with variants outside of S6 regions may be somewhat less severely affected.