Looking back. Admittedly, I have not written an end-of-the-year review for a quite some time. However, there were a few notable moments in epilepsy genetics in 2021 that I think were worth remembering. The second year of the COVID-19 pandemic started out as a year of recovery and readjustment, only to run into unanticipated supply chain issues and novel COVID variants hanging over our transition into 2022. The scientific community was affected by these developments in different ways that made progress of science somewhat unpredictable and uneven. 2021 was the year when the phrase “unprecedented times” became stale and overused. Here are five things to remember from 2021, which will be remembered as part of a transitional phase in epilepsy genetics. 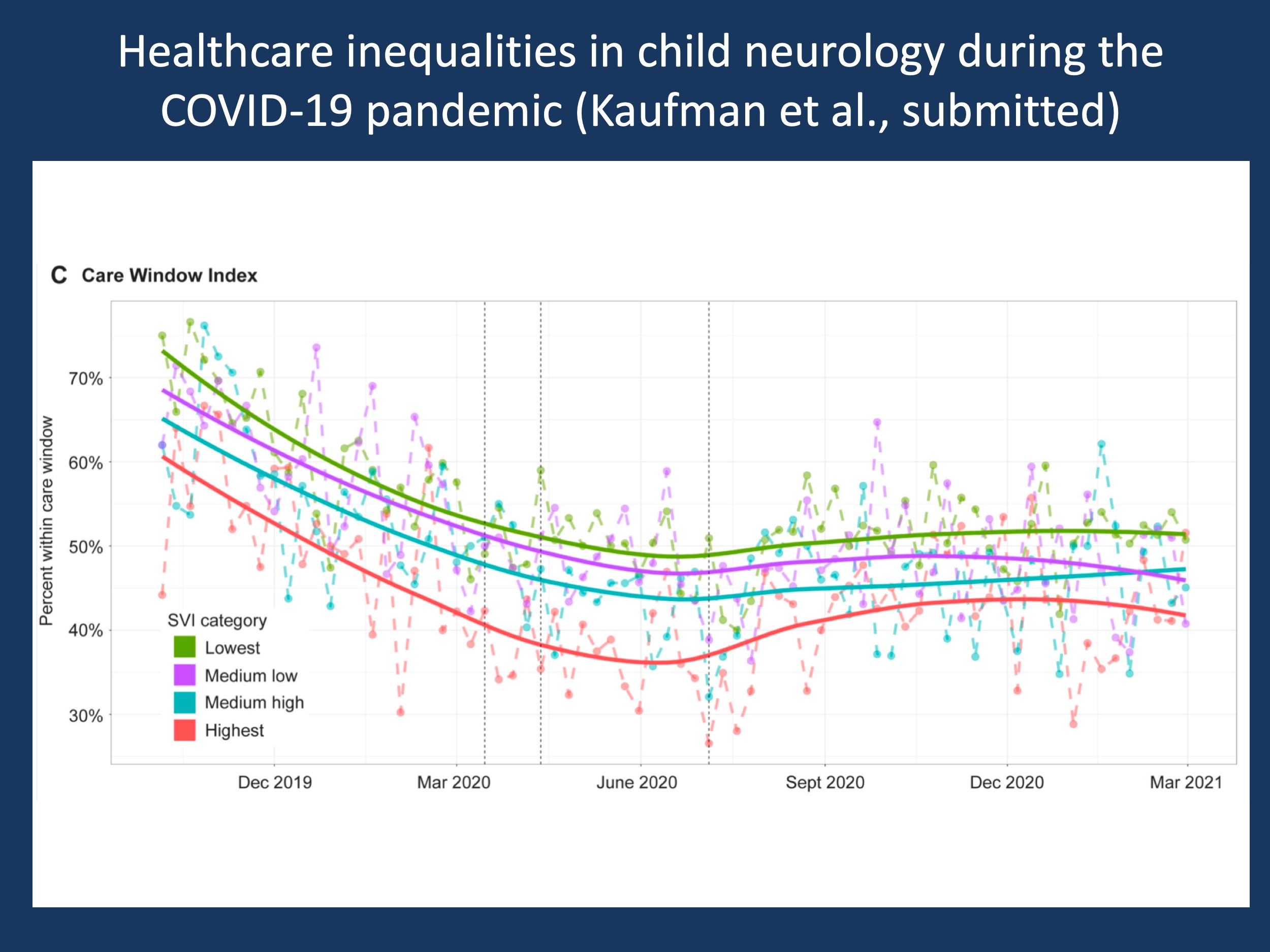 Figure 1. This figure is my most important scientific figure in child neurology in 2021. The figure shows the follow-up within care window and patient portal activation rates as metrics to determine equity of telemedicine access, stratified by social vulnerability. The Care Window Index (CWI) is a measure we generated from the Electronic Medical Records (EMR) that indicates whether families follow up within the time frame that was suggested at the last encounter. For example, if all families were asked to follow-up within six months and actually follow up, the CWI is 100%. If only 50% of families follow up during this time frame, the CWI is 50%. In this figure, the proportion of patients with follow-up within their care window over time is shown, separated by SVI categories. In brief, barriers for socially vulnerable families and racial and ethnic minorities persist. Care was delayed by >50% during pandemic onset. Individuals from socially vulnerable families had more than a 2x risk for missing their follow-up care window during the pandemic (Kaufman et al, medrxiv.org). Showing this data in this blog post reinforces the first take-home message from this blog post, 2021 was the year of the preprint. Otherwise, you would probably not see this data for another 3-6 months.

2021 – an overview. During this blog post, I am somewhat arbitrarily nominating 2021 as the year when certain key events in epilepsy genetics took place. Yes, this is somewhat hyperbole, but I felt that it would be worthwhile pointing out several developments in the field that took place, including several slower trends that had been bubbling beneath the surface and finally became obvious. Here are my five picks of the notable developments in epilepsy genetics.

1 – 2021 was the year of the preprint in epilepsy genetics
Putting up your manuscript was somewhat of a vanity thing only a few years ago, emphasizing that your research is so important that it needed to be shared with the community before peer reviewers were able to comment. This attitude towards preprints and preprint servers such as bioxriv.org or medxriv.org has changed completely: in 2021, we put up preprints for many major publications, often prior to grant proposals or in order to accelerate the time frame for making research public given the increased delays with many publishers during the pandemic. While writing this post, there is a wide range of preprints related to epilepsy genetics out there that are worthwhile knowing about, including some of the KCNQ2-related work from our Center Without Walls or machine learning methods to predict ion channel dysfunction. We finally also pulled the trigger for some of our work on telemedicine. Michael Kaufman’s manuscript on telemedicine in child neurology in >14,000 telemedicine encounters was the first preprint that our lab ever published. Given the ongoing issues surrounding telemedicine, including questions surrounding equitable care and adequacy across various indications in child neurology, we felt that making this information available would be timely (Figure 1).

3 – 2021 was the year of the triple-digit case series
2021 was the year when our knowledge of rare genetic epilepsies reached a triple digit threshold. 412 individuals with SCN2A-related disorders in our study spearheaded by Katherine Crawford and Julie Xian, 160 individuals with WDR45-related disorders in the study by Saffari and collaborators, 248 individuals with KCNT1-related disorders in the study by study by Bonardi and collaborators, 392 individuals with SCN8A-related disorders by the study led by Katrine Johannesen and Rikke Moller, 534 individuals with STXBP1-related disorders in our study by Julie Xian and collaborators. It is critically important to catalogue and jointly analyze data in a large number of individuals in ultra-rare disorders given the broad spectrum of phenotypes in most neurodevelopmental disorders and genetic epilepsies. Smaller studies are often biased towards specific phenotypes, and these large, authoritative studies are important in outlining the overall landscape. This orientation is critical when we think about therapeutic windows and phenotypic features that can be traced in clinical studies. And yes, all these rare genetic epilepsies listed above are current targets for precision medicine approaches and future clinical trials. Therefore, 2021 was the year that a novel type of study was invented, the “rare disease triple digit case series”. It is needless to say that any of the studies listed above are likely standard references for the next decade. Brain, one of the oldest scientific publications in the neurology field, published three out of five of these studies in 2021 and I would like to give the team at Brain a big Thank You for being so visionary for publishing some of the most relevant clinical studies in the genetic epilepsies to date. Finally, I would like to add that triple digits require novel frameworks to catalogue and analyze clinical data that becomes big quite rapidly in these studies. Our two studies, focusing on SCN2A and STXBP1, were entirely driven through a controlled phenotypic dictionary called Human Phenotype Ontology (HPO). We’ll look back at 2021 as the year when phenotypes became computable.

4 – 2021 was the year of imperceptible moments that we’ll realize afterwards
The AES presentation of the Dravet natural history study lasted 10 minutes, and Andreas Brunklaus stood in for Ingrid Scheffer with an audience of fewer than 50 people during the most unusual AES ever. The press release of the first SCN1A antisense oligonucleotide (ASO) safety study demonstrating safety in humans is something that most people only heard about afterwards. The first systematic review by Sheidley and collaborators on epilepsy genetics, carefully dissecting the entire literature and affirming a 24% diagnostic yield for exome and genome sequencing, almost got lost in the post-AES shuffle. Moments kept whooshing by and we didn’t realize them. However, we end up with a year that finalized a highly detailed natural history study in Dravet Syndrome, showed that ASO therapies are in principle feasible, and provided a sound foundation that justifies genetic testing in people with epilepsy. These are major milestones that we’ll look back at wondering why we didn’t give them the credit they deserve in the first place. However, 2021 leaves us in an entirely different position than it started out with. We can reliably measure natural histories, ASOs can work in principle, and the yield of genetic testing is no longer to be questioned. Or to repeat my answer to a question that I received during this year’s AES during the Special Interest Group (SIG) on intractable generalized epilepsies: “You’re asking whether genetic testing in adults with intractable GGE to rule out Glut1 deficiency is relevant? This is standard of care and not much different than getting an EEG or MRI on your patients. If your patient has Glut1 deficiency, this is actionable and life-altering. I’m honestly wondering why we’re still asking this question.” I wouldn’t have had this this knee-jerk reaction in December 2020. However, one important point to make is that the existing literature only supports the yield of testing in the epilepsies, not the so-called non-yield outcomes such as changes in patient management or patient-centered outcomes. In the systematic review by Sheidley and collaborators, only 43 studies out of nearly 6000 studies commented on non-yield outcomes and none were designed to assess these outcomes.

5  – 2021 was the year of the rare disease voice
Admittedly, I have never read a resolution of the United Nation’s General Assembly. However, I couldn’t help but read through the first-ever UN resolution on rare disease that was the result of tireless advocacy by rare disease civil society groups worldwide led by Rare Diseases International (RDI), the NGO Committee for Rare Diseases, and EURORDIS. All genetic epilepsies are rare diseases, and as of Nov 10, 2021, all 193 United Nation Members recognize “the need to promote and protect the human rights of all persons, including the estimated 300 million persons living with a rare disease worldwide, many of whom are children, by ensuring equal opportunities to achieve their optimal potential development and to fully, equally and meaningfully participate in society” (I’m citing the actual UN resolution here). 2021 was also the year that many rare epilepsy foundations were awarded Chan-Zuckerberg Initiative grants, including FamilieSCN2A and the CACNA1A Foundation. The rare disease voice is increasingly heard and will be driver of policy going forward, generated both through grassroots efforts and international and national policy frameworks. However, one important thing to keep in mind is that we’re all in this together and for policy aspects, it may be more relevant to think about the rare epilepsies jointly rather than breaking them up into discrete genetic etiologies. In a way, 2021 was the year when the many separate identities of the many rare genetic epilepsies may have found a common voice. I am looking forward to working with organization such as the Rare Epilepsy Network (REN) or CombinedBrain in the future. Finding commonalities after identifying individual genes will be one of our challenges going into 2022, realizing that features that health inequality in rare diseases, combatting stigma, and intersectionality are likely best addressed by finding a common voice for the genetic epilepsies. Or to quote the UN General Assembly:

“Expressing concern that persons living with a rare disease and their families can be at greater risk of being disproportionately affected by stigma, discrimination and social exclusion, and that one of the major barriers to improving the inclusion and participation of persons living with a rare disease and their families in society is the lack of knowledge and expertise in the field and a lack of awareness regarding the issue, underscoring the need to address the root causes of inequality and discrimination faced by persons living with a rare disease and their families, and in this regard recognizing that there is a need for policies and programmes to prevent and combat prejudice, to foster inclusion and to create an environment conducive to respect for their rights and dignity, […] calls upon Member States to strengthen health systems, notably in terms of primary health care, in order to provide universal access to a wide range of healthcare services that are safe, of quality, accessible, available and affordable, timely, and clinically and financially integrated, which will help to empower persons living with a rare disease in addressing their physical and mental health needs to realize their human rights, including their right to the highest attainable standard of physical and mental health, to enhance health equity and equality, end discrimination and stigma, eliminate gaps in coverage and create a more inclusive society.”

I rest my case.