ARX. This is the epilepsiome page for ARX, which is associated with a spectrum of overlapping neurological conditions, including X-linked intellectual disability, West syndrome, Partington syndrome, Ohtahara syndrome, Proud syndrome, and X-linked lissencephaly with abnormal genitalia [OMIM#300382]. These ARX-related conditions are characterized by variable features, including intellectual disability, epilepsy, movement disorders, EEG findings or brain abnormalities.

Here are the most recent blog posts on ARX

In a nutshell. In 2002, three different groups of investigators identified pathogenic variants in ARX as the cause of five distinct phenotypes including X-linked lissencephaly with abnormal genitalia, Partington’s syndrome, X-linked infantile spasms, and non-syndromic X-linked intellectual disability. Thus, it was clear that from the start that ARX variants could cause a broad range of phenotypes. In 2009, two male cousins with the same ARX pathogenic variant were diagnosed with two different epilepsy syndromes, West syndrome and Ohtahara syndrome, indicating the degree of variable expressivity associated with ARX-related conditions, even with the same variant in the same family. Female carriers may have intellectual disability, epilepsy, and often display agenesis of the corpus callosum. This finding is consistent with X-linked inheritance with variable expression in females. 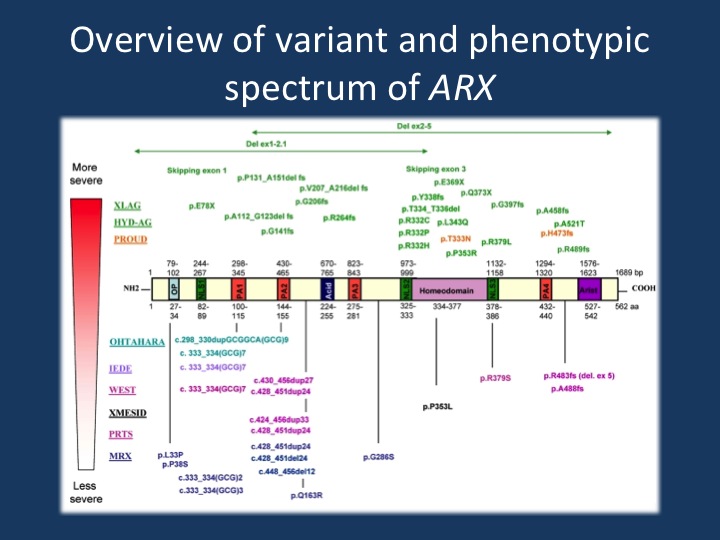 Figure 1 from Friocourt & Parnavelas, 2010. While non-malformation phenotypes [non-specific X-linked mental retardation (MRX), Partington (PRTS) and West syndromes, XMESID, IEDE and Ohtahara syndrome] tend to be caused by pathogenic variations outside the homeodomain or inside the first two polyalanines tracts of ARX, brain and genital malformation phenotypes [XLAG, hydranencephaly with abnormal genitalia (HYD-AG) and Proud syndrome] are associated with pathogenic variations that truncate the ARX protein or alter residues in the highly conserved homeodomain. Interestingly, a non-conservative missense mutation near the C-terminal aristaless domain (p.A521T) causes unusually severe XLAG with microcephaly and mild cerebellar hypoplasia. (Figure adapted from Friocourt, G., & Parnavelas, J.G. (2010). Mutations in ARX Result in Several Defects Involving GABAergic Neurons. Frontiers in Cellular Neuroscience, 4, 4. “This is an open-access article subject to an exclusive license agreement between the authors and the Frontiers Research Foundation, which permits unrestricted use, distribution, and reproduction in any medium, provided the original authors and source are credited.” https://www.ncbi.nlm.nih.gov/pmc/articles/PMC2841486/)

Pathogenic ARX variants can cause a wide range of phenotypes, including those described below.

ARX-related epilepsy. Patients have been found to present with features consistent with a diagnosis of West syndrome, Partington syndrome, Ohtahara syndrome, Proud syndrome, X-linked lissencephaly with abnormal genitalia and nonsyndromic X-linked intellectual diability. In all conditions, intellectual disability is present and ranges from mild to profound. Seizures are present in all the syndromes listed, but there are variations in age of onset, type of seizures, severity of seizures, and treatment. Additional clinical features may include hypotonia, abnormal genitalia, and movement disorders.

Genotype-Phenotype Correlation. As discussed above, ­ARX-related disorders can have significant variable expressivity, even with the same variant within the same family; however, some genotype-phenotype correlations have been identified. Phenotypes involving malformations of the brain, such as X-linked lissencephaply with abnormal genitalia and Proud syndrome, are associated with truncating variants and missense variants in the homeobox domain. Non-malformation phenotypes are associated with missense mutations outside of the homeobox domain or expansions in the polyalanine tracts, and include West syndrome, Partington syndrome, Ohtahara syndrome, and X-linked intellectual disability.

Considerations for gene level interpretation. First, it is important to establish the strength of the evidence showing that the gene is associated with epilepsy. Some genes may only have one variant reported in a single individual with epilepsy, while other genes may have multiple variants reported in many large families with an autosomal dominant pattern of epilepsy. For ARX, there is moderate evidence for its role in human epilepsy.

Considerations for variant level interpretation. When reviewing the significance of a variant, it is important to consider the impact on the gene and the presence of the variant in previously described patient and control populations. Many clinical genetic testing laboratories classify genetic variants into different categories, ranging from benign to pathogenic. Variants that are common in control populations and would not be predicted to have a major impact on the gene/protein are generally classified as benign. Variants are more likely to be classified as pathogenic if the variants are rare or not present in the control population, reported in multiple individuals or families with disease, and likely to have a higher impact on the gene/protein based on the type of mutation or functional studies. Variants with uncertain or limited available evidence may be classified as variants of uncertain significance (VUS), indicating that further information is required in order for the variant to be further defined. In some cases, testing additional family members can be helpful, as it allows the lab to determine whether or not the variant was inherited (versus de novo) and how the variant segregates with disease in the family. This is particularly true for ARX variants, as most disease-causing variants would be expected to be de novo. Sometimes further classification of a VUS requires waiting for the identification of additional patients or families with similar or nearby variants.

Inheritance, Penetrance & Prevalence. ARX-related conditions are inherited in an X-linked recessive manner. Female carriers are generally asymptomatic or may be mildly affected, depending on the genetic variant and condition. The most common conditions caused by disease-causing variants in the ARX gene are West syndrome and X-linked intellectual disability. The prevalence of West syndrome is 1 in 100,000 individuals, but includes individuals with a CDKL5 variant and other causes of infantile spasms. The exact prevalence of ARX-related disorders is unknown, although it appears to be a common cause of intellectual disability.

Mechanism.The ARX gene encodes one of the homeoproteins in the paired class. This class of homeobox genes are thought to be important regulators of essential events during embryogenesis, including the development of the pancreas, testes, brain and skeletal muscles. The ARX protein helps to regulate the process by which cells differentiate and migrate, in particular interneurons. The protein also contains an aristaless domain that is linked to major developmental functions.

Research studies, patient registries, and family connections. The Epilepsiome team is happy to facilitate if you have questions or a specific interest in this gene. There are a number of groups/websites that provide relevant information and support for individuals and families with ARX-related conditions, including the groups listed below.