SCN2A. Last Thursday, I hopped on a plane to Chicago to join the first FamilieSCN2a Foundation Conference. SCN2A, one of the most common genes in genetic epilepsies, has emerged as a gene with a broad range of phenotypes, which makes understanding this gene relatively complicated. I am very happy that the SCN2A community is currently coming together to provide a platform for patient initiatives and connections to clinicians and researchers. Here is my list of five things I learned about the genetic shape-shifter in Chicago. 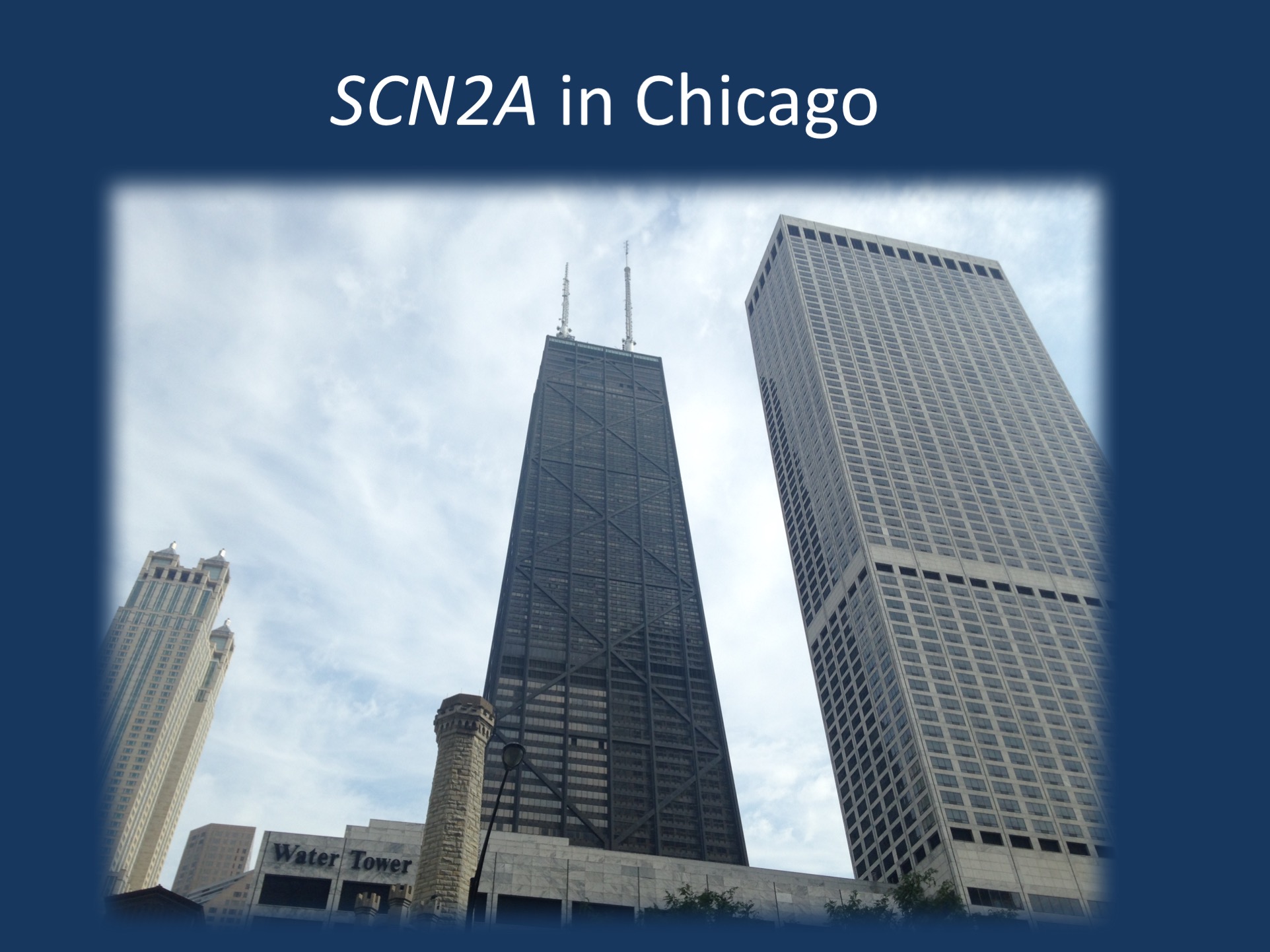 Figure. The first FamilieSCN2a Foundation Conference took place in Chicago last weekend. During this conference, we discussed the current state of SCN2A-related research and possible ways on moving forwards. We contributed a talk on “how to read your SCN2A testing report”. In this blog post, I have tried to list five things that I have learned about SCN2A in Chicago.

The VUS gene. During my own presentation, I tried to provide an overview of how to read an SCN2A genetic testing report. When we called SCN2A the “genetic shape-shifter” a few years ago, we were referring to the fact that SCN2A genotypes and phenotypes offer more complexity than most other epilepsy genes. One point that I tried to make during my presentation is that SCN2A is a gene particularly loaded with variants of uncertain significance (VUS), mainly due to the fact that most causative mutations resulting in SCN2A encephalopathy are missense mutations with only a few recurring hotspots. Because of this, it is worthwhile revisiting SCN2A gene reports on a regular basis. Yesterday’s VUS may be a disease-causing mutation by now or a rare benign genetic variant that does not contribute to disease. This does not mean that we have to resequence – but a variant that has been discovered once may need to undergo re-interpretation. Later on Friday night, this expanded into an interesting discussion with Wendy Chung from Columbia. We both agreed that our need for re-interpretation is likely to increase exponentially in the future and that the current system is not really equipped yet to deal with an onslaught of complicated re-interpretation requests. In fact, there will be interesting developments on how these re-analysis tasks will be covered by health insurances. Currently, many laboratories cover reanalysis for free.

I typically don’t count my own presentation amongst my list of five. So here are the five things that I learned about SCN2A during my brief trip to Chicago.

1 – The VIP connection and the “handshake”
When we will look back in 5 or 10 years on what made the most difference in bringing the SCN2A community together, the connection with the Simon’s Foundation VIP program will be one of the most important steps. The Simon’s Foundation is one of the driving forces behind autism research and was critically involved in building the infrastructure that has led to the major genetic studies that shaped our understanding of autism genetics. During the meeting, I tried to make the point that the epilepsy genetics community needs this “handshake” – a connection between the epilepsy genetics community and the autism community given complex neurodevelopmental presentation we see in kids with genetic epilepsies such as SCN2A encephalopathy.

2 – The cancer comparison
During her presentation, Anne Berg drew an interesting comparison to the cancer field. SCN2A has nothing to do with cancer, but if we look at the regulatory framework and infrastructure present in the cancer community, particularly the pediatric cancer community, there are similarities. Ann indicated that for pediatric cancer, every patient is mandated to be registered in a central database and most children automatically become research participants while getting the best treatment on a study protocol, even though the pediatric cancers are as heterogeneous as the genetic epilepsies. One way to put this is that rare diseases unite.

4 – Who is connecting the dots
Who is holding the data on the number of patients with SCN2A-related epilepsies? While I argued that most of the diagnostic genetic data will eventually make it into public resources such as ClinVar, there is no single repository that combines both genetic and phenotypic data. Some of the data is present with clinicians and researchers in the field and, in collaboration with many of our international collaborators, we are currently putting together one of the first larger reviews on SCN2A phenotypes with more than 100 patients coordinated by the epilepsy genetics team in Dianalund. However, I also tried to point out that much of the SCN2A “intelligence” is with the patient community. When it comes to providing a broad census of the community, 100 parents connecting through registries and social media will always be faster than a team of 10 researchers. The main challenge will be to build tools and platform that will help us make this data usable.

5 – the brilliance of the SCN2A electrophysiologists
Saturday got technical with the nuts and bolts of SCN2A electrophysiology. I am sorry that I missed the second day of this meeting, but Steve Petrou was kind enough to summarize the second day for me. On Saturday, a number of high profile SCN2A researchers presented their work. Al George presented his vision on high throughput analysis of SCN2A using automated planar patch clamp recording, and Jennifer Kearney summarized her experience with the Q54 mouse positioning it as a useful model of SCN2A disorders. Evangelos Kitskinis gave an elegant account of his work on SCN1A human stem cells with functional analysis using the so-called “optopatch” system. Steve himself who I have known since the beginning of my life in epilepsy genetics in Australia described his experience with SCN2A high throughput analysis. He showed how every variant seems to have its own story often with paradoxical changes that may not be consistent with a simple gain-of-function viewpoint. The shape-shifter lives up to his reputation in electrophysiological experiments, as well. Steve also described how their dynamic clamp system will be used to generate real time neuronal action potential firing models of variant channels expressed in various cell models. Ted Cummins showed how R853Q, one of the most frequent recurrent SCN2A pathogenic variants, may have changes in the mysterious omega current, while R1882Q, another recurrent SCN2A pathogenic variant results in changes to the resurgent current. Both types of electrophysiological changes are difficult to measure using standard approaches and therefore challenging for drug screening. This is where mouse models and stem cells come in.

Steve asked me add a comment that even though SCN2A is genetically heterogeneous including multiple variants with often unique mechanisms, we should not give up the search for a targeted therapy that gives benefit to all. And a better insight on what the numerous variants of uncertain significance do to the SCN2A channel will help us understand this.

Finally, I would like to thank the SCN2A families, in particular Leah Schust, for making this meeting happen. I’m looking forward to being part of this again next time.

3 thoughts on “Five things I learned about SCN2A in Chicago”