Focal to genetic. While there was little interest in the genetics of focal epilepsies only five years ago, the field has gained significant momentum since the discovery of DEPDC5 and the subsequent new appreciation of the mTOR pathway. This finding resulted in several gene discoveries and linked traditional genetic epilepsies with the emerging field of somatic mutations. In May 2017, the European epilepsy genetics community met on the Faroe Islands for the international conference on focal epilepsy. Here are the three things that I learned about focal epilepsies on the Faroe Islands. 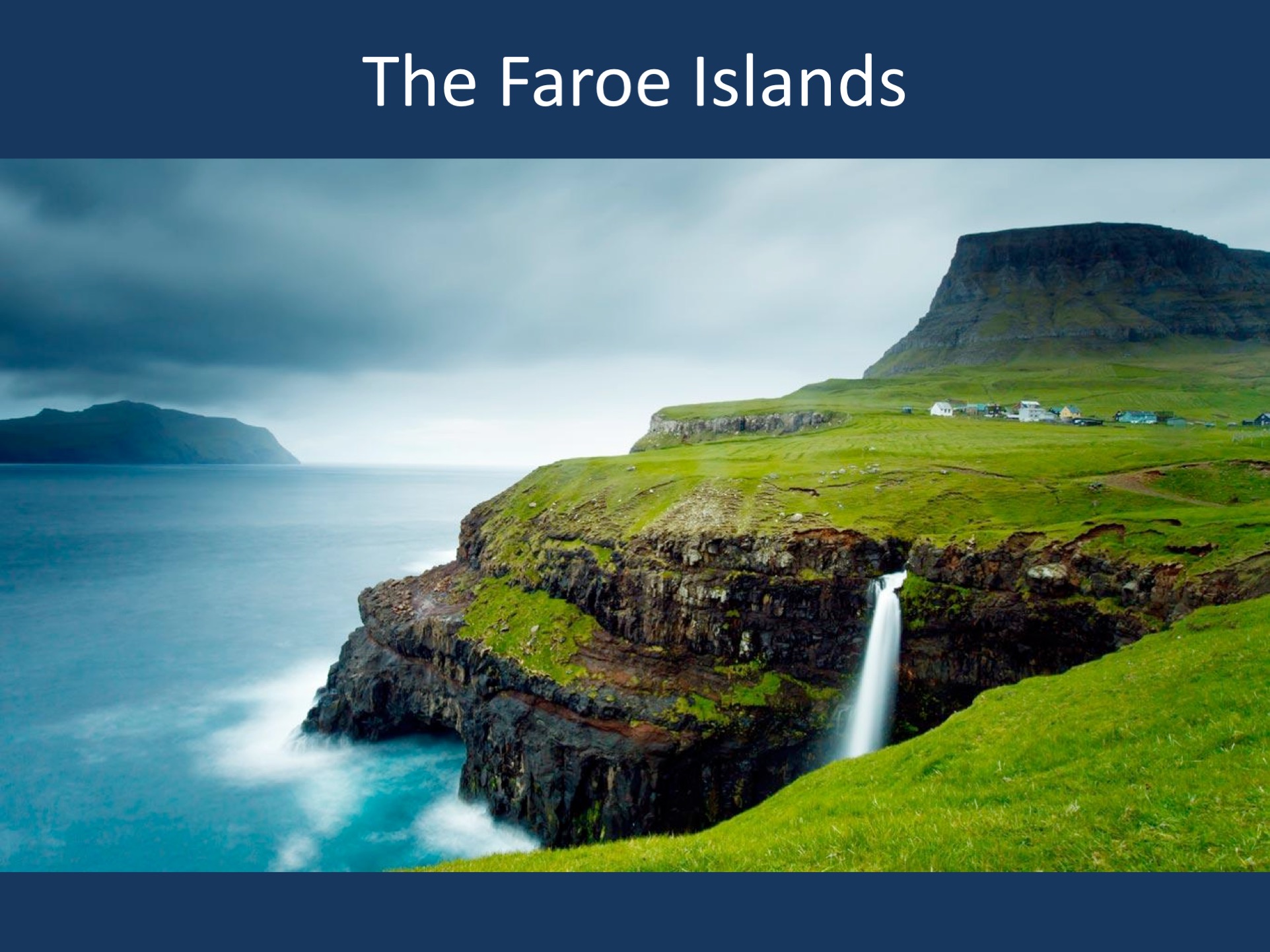 Gásadalur, Faroe Islands. A photo with all the colors that the Faroe Islands have to offer. The green grass, black volcanic rock and the white of the gushing water on the Faroes cliffs. Some of the cliffs on the Faroe Islands stand almost 2,500 feet (750 meters) high. [Photo by Amber Case modified under a Creative Commons License]

The Faroe Islands. Prior to giving you my list of take-home messages from the Faroe Islands, I just want to thank the organizers for making this happen. I knew nothing about the Faroe Islands when I stepped onto my plane in Newark and coming back only a few days later, I feel that I have a good sense on what living on this remote archipelago between Scotland and Iceland is like. I had a long layover at Reykjavik airport with the majestic mountains of the Icelandic landscape looming in the background. Hence, my presentation and the three things that I have learned have some kind of Viking theme to them – not the battle-axe wielding barbarians that most of us may think of at first, but the clever and courageous explorers that set out to explore the North Atlantic more than 1,000 years ago.

1 – In the middle of difficulty lies opportunity
At first glance, the Faroe Islands are an impossibility. A small group of islands in the North Atlantic made out of volcanic rock with little more than two inches of top soil. Not a single tree grows on these islands and small, numerous rivers cut dramatically through the rolling hills into the black bedrock. The real impossibility of the Faroe Islands, however, is the fact that they were found in the first place, even prior to the Vikings. It is currently assumed that Irish monks initially settled on the barren, remote hills of the Faroes, sailing all the way from the British Isles. It is difficult to imagine for us what skills these early explorers needed to have to spot a remote archipelago and not disappear without a trace into the emptiness of the North Atlantic. Navigating by the stars, using subtle cues such smells, taste, and clouds on the remote horizon may have helped the early navigators to find the Faroe Islands, not just accidentally, but finally with skilled precision. It was difficult getting to the Faroe Islands in the first place and probably few people initially considered the islands the place of their dreams. However, once they were settled, a veritable Faroese culture emerged that has persisted to date.

What can we learn from this with respect to epilepsy genetics? There are aspects of science that are as cold and uninviting as the North Atlantic in early January. Focal epilepsy genetics, a field that I have always tried to steer around as much as possible, was one of these areas that offered little rewards while other topics were taking off. The discovery of the Faroe Islands shows us that is it sometimes possible to find islands of opportunity in what you would have initially considered empty ocean space. Again, think mTOR. Out of nothing suddenly emerges a new concept that we may soon apply to a broad variety of focal epilepsies.

2 – Learning to expect the unexpected
You may think that you have a good understanding of the Faroe Islands by now. That’s what I thought until I got into the taxi and peeked at the sign indicating the distance to Torshavn – 40 km (25 miles). I did not expect that (a) there would be such long distances on the Faroe Islands or that (b) there would be a networks of well-paved roads. In fact, the distance from the airport to Torshavn was by far not the longest distance you could drive on the Faroes – you can spend the better part of two days exploring the islands by car including the tunnels that connect most of these islands. I was not prepared to think of these apparently small islands as a destination for motorists, but you’ll need a lot driving to cross distances on the islands. My take-home message: never underestimate places you have never been to. We may think of places as big or small based on our imagination and limited experience, but there is some truth to the almost kitschy notion that travelling broadens your horizon. With regards to the Faroes, I learned not to underestimate remote places, especially not in the 21st century.

My take home message for epilepsy genetics? When I look back over the last decade, there are things that I completely underestimated and did not expect: I underestimated GRIN2A as a disease gene and we were initially happy to get this published in Epilepsia. I did not anticipate the lack of success of GWAS studies and – once I had my youthful enthusiasm turned into general skepticism – the success of exome studies and the de novo paradigm. CHD2 was sitting in front of me for more than a year and I didn’t believe it and so was SCN8A. My conclusion from this? Make sure that you work within a framework where surprises and abnormalities are occasionally welcome and that you have both the mindset and the capacity to at least follow a few of them.

3 – Chance favors the connected mind
It was the first key note speech that I gave in hiking boots. My backpack got lost on the way from Iceland to the Faroes and the frontier atmosphere of the North Atlantic motivated me to give my introductory presentation in boots, cargo pants and my STXBP1 hoodie. The overall atmosphere of this meeting was casual and the seclusion of the Faroe Islands gave this conference a retreat character. Connecting at meeting places, trying to catch new ideas while refining old ones, is one of the themes in Steven Johnson’s book “Where good ideas come from” (see video here). The emphasizes the idea that chance favors the connected mind.

Focal epilepsy genetics is slowly gaining traction as a research field given that a large group of people was around to pick up new concepts that randomly emerged. Nobody knew the genes or the underlying mechanisms to start with, but once a framework was established, an interacting network of scientists continued to push this field further, trying and often failing one idea after the other. What I am trying to emphasize with junior scientists in 2017 is that only 1:20 ideas actually work. You should make an allowance for 95% failure no matter how good and ambitious you are and if your boss expects you to generate a Science paper within two years by just working harder than anybody else, it may sound impressive, but goes against the fact that a scientific career is measured in five, if not ten-year increments and that you need a connected mind to pick up good ideas during this time.