Classicism. After completing my rotation as the senior consult resident in adult neurology, I handed over the stroke pager and the consult phone, and on the next day we boarded a plane to Germany for a two-week vacation. During our first week, we paid our annual visit to the Leipzig group and used the opportunity to explore the cradle of German classicism, Weimar, Jena, and Leipzig. Here is what Goethe, the overlord of German classicism, told us about trust, Faust, and the current issues of collaborative genomic science. 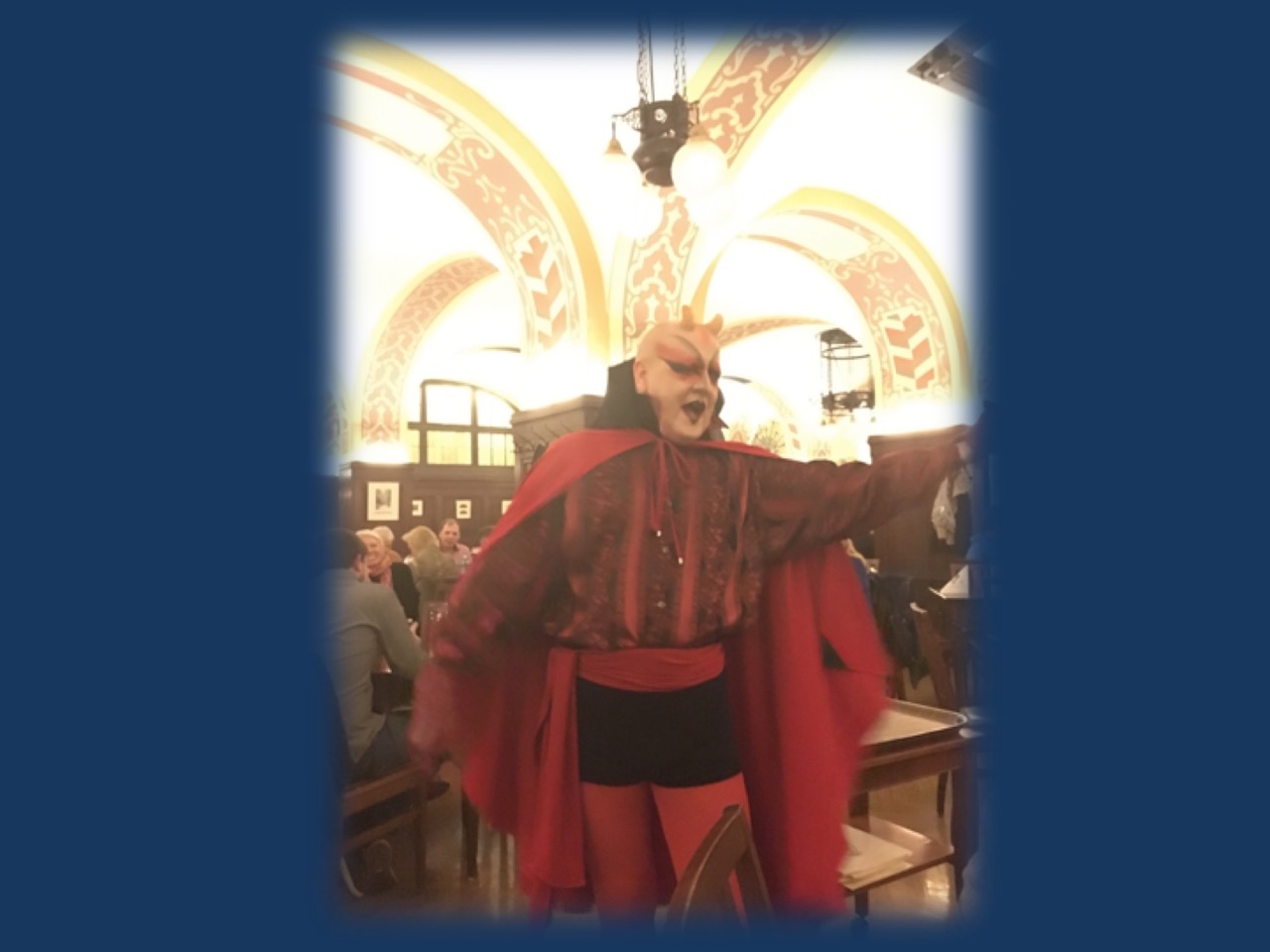 Figure: A Mephistopheles actor in the Auerbach’s Cellar in Leipzig: “I am the spirit that negates.
And rightly so, for all that comes to be deserves to perish wretchedly; ‘Twere better nothing would begin. Thus everything that your terms, sin, destruction, evil represent— That is my proper element” Johann Wolfgang von Goethe, Faust – Part One

Background. Every year, I am trying to reflect on what I am learning during my holiday break about how science works and how the issues that we encounter everyday apply to how we operate in science. On our day trip through the Thuringia landscape, Katie, Johannes, and I brainstormed on what this blog post would be about. Starting out from a broad range of topics including the first results of our gene panel project, the functionality of East German communism, Langos (a typical East German Christmas market food), and the misunderstandings in modern day collaborative science, we finally zeroed in on Goethe. Actually, there is not much zeroing in to do – Goethe, in this part of the world, is inevitable. Here is what Goethe tells us about collaborative science.

Auerbach’s Cellar. Goethe wrote Faust, his masterpiece, in Auerbach’s Cellar, a traditional restaurant in the Old City of Leipzig. The basic storyline of Faust deals with the seduction of a rational scientist. Mephistopheles, the devil, eventually manages to win over Dr. Faust, using the inherent weakness of a character who has a purely rational and scientific mindset. Eventually, Faust signs a contract with Mephisto with his own life, basically signing away his afterlife in order to improve his power and knowledge in the present day world. It’s a typical short-term gain versus sustainability debate – transported to the modern world, Faust represents the present day scientist who has to decide between short-term gains and long-term sustainability. How easy would it be to take all the data that we’re entrusted with and simply use it for our purpose – if we could only get our hands on certain datasets, tools, or results to achieve positions, obtain grants, or publish in certain journals, what would we be willing to promise or sign away? We’re more often tempted to sign in Faustian bargains that we might believe. While Faust is a tragic play, the real scientific drama that has uncanny parallels to modern science unfolded in Goethe’s own scientific career.

The intermaxillary bone. To be honest, Goethe’s scientific achievements are slightly overrated. However, he tried to play the scientific game of his time. Of course, Goethe was oblivious to the excitement of genomic science, massive parallel sequencing, and variant interpretation, but I’m quite certain that he would have involved himself in the topic du jour of the time. Back in the day, in 1784, Goethe involved himself in cutting edge anatomical science – the scientific frontier of the 1780s. And he was thrown under the bus by his collaborators who used his finding for their own benefits. Let’s start from the beginning: during our visit in April 2016, the Jena medical genetics institute featured an exhibition about the human intermaxillary bone. Back in the 1700s, the lack of an intermaxillary bone, a small bone in the upper jaw, was taken as evidence of the uniqueness of humans. In contrast to all other mammals, humans did not have an intermaxillary bone; hence – in the spirit of the 1700s – humans were distinctively different from all other animals, a position that was explicitly dogma-friendly. Goethe was one of the scientists to suggest that this hypothesis was incorrect. Humans did have an intermaxillary bone after all, and anatomy rather confirmed than contradicted the connection between humans, apes, and other mammals. Goethe was actually not the first to report this. Others, including Pierre Broussonet (1779) and Vicq d’Azyr (1780), had actually been faster to report this, but they did not have the impact and standing that Goethe had. Yes, there was competition even back then. But then Goethe – to use modern language – really messed up the publication part of his finding.

Trying to get the intermaxillary bone published. Goethe wanted to get comments on this discovery, and the way things were done back in the 1700s was to request feedback from people in the field prior to publishing, a practice that we still use today. However, Goethe’s friend Merck, who he used as an intermediary, delayed passing on comments to Petrus Camper, the anatomical authority of the day, downplayed Goethe’s findings and actually even belittled him for this. Goethe was a big name in politics and a famous playwright, but his standing in anatomical science was not all that solid – hence he required an authority to help him communicate with senior people in the field. Merck even used Goethe’s findings for his own publications. It’s like trying to get productive comments on your most competitive exome manuscript on a new gene, only to find out that the colleague you trusted already submitted his own publication taking advantage of your findings. Goethe became so mad at Merck that Faust’s Mephistopheles may actually be based on him.

What Goethe tells us about collaborative science. The currency of collaborative science is trust, the mutual agreement that we respect intellectual property and know our boundaries. Even though science is about quantifying impact, grant acquisitions, and number of publications, trust is a soft part of collaborative science that is difficult to quantify. Trust becomes most obvious as a factor in science when people feel disappointed or taken advantage of. It is difficult to trace back what went wrong between Goethe and Merck, but this conflict is reminiscent of modern day conflicts in science that erode trust. Maybe Merck thought that he was in the position to be the gatekeeper of Goethe’s finding, given his standing in the field. Maybe he assumed that Goethe knew that this is how things worked in 1700s cutting-edge anatomy. Maybe Goethe should have sent his thoughts out to more than one person for comments.

Clash of implicit assumptions. A different way of approaching the trust issue is that the breakdown of trust is a clash of implicit assumptions that were never really verbalized. It is easy to frame the Goethe-Merck debate as a clash between good and bad, a coldblooded physician scientist betraying his long-term genius friend for short-term gains. However, in real life, people are never really purely good or bad. Maybe both of them simply had different assumptions that they failed to verbalize. It is well possible that Merck was somewhat appalled to be forced into forwarding Goethe’s findings (“All right, now Goethe wants to be an anatomist”). And his next thought may well have been that this information that was forwarded to him by a hobby anatomist was his to keep as he was the professional (“As he is asking me for a favor, anyway, he probably doesn’t mind if I use his data for my next talk.”). Goethe took revenge by throwing all his 1700s social media power at poor Merck and he will live on forever as Mephisto. But if the story of Faust and Mephisto tells us one thing, it is that the root of all evil is not the Mephisto-like character of our opponents but the failure to communicate and question our implicit assumptions.

One thought on “Mephistopheles, the intermaxillary bone, and trust in science”