Dublin. In September 2016, my way back from the ECE in Prague led through Dublin where I was able to spend two days, following an invitation by the Science Foundation Ireland. Given that there was a gap between the Prague congress and the day that I was supposed to be on-site, I arrived in Ireland early and spent 24h in Dublin. When I took a stroll into the city, I ended up in Trinity College and the exhibition about the Book of Kells, a 1200 year-old manuscript containing the Four Gospels of the New Testament. One part of the exhibition raised my interest, as it discussed the way that eighth century Irish scribes dealt with mistakes – I thought that this historical view would be an interesting introduction to review how we deal with scientific mistakes today. 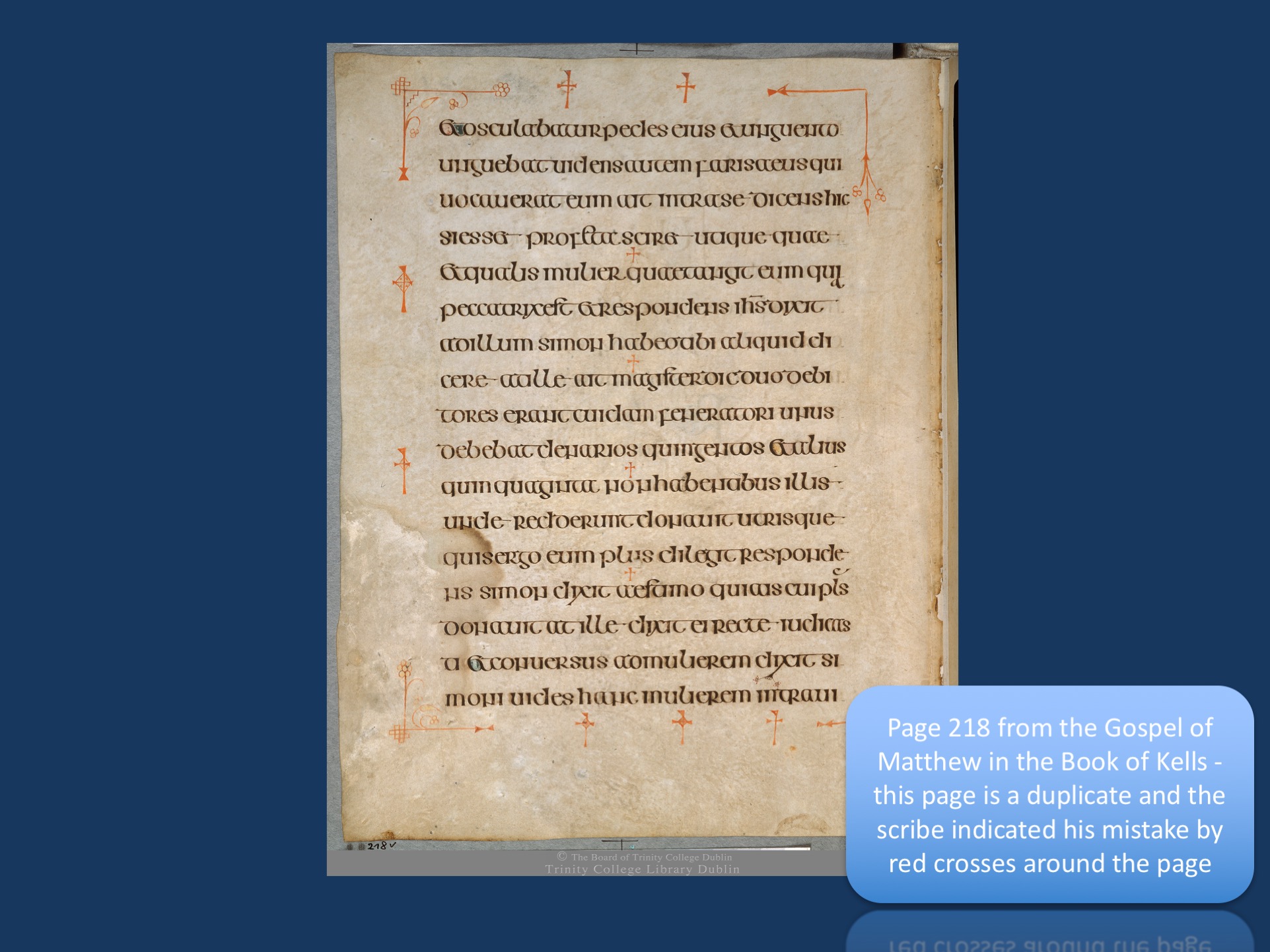 The Book of Kells. A digital reproduction from page 218 from the Gospel of Matthew in the Book of Kells. Page 218 is a duplicate page in the 1200 year-old book that is considered one of the most valuable historical documents of this time. The scribe indicated this page to be a mistake by drawing red crosses around the page. The Book of Kells is housed at Trinity College, which holds the copyrights to any reproduction of this work. For this blog post, the Manuscripts Department at Trinity generously granted a license to Beyond the Ion Channel to reproduce this page. The digital collection of Trinity College in Dublin can be found at http://digitalcollections.tcd.ie/home/.

Motivational posts. This is one of the pieces that I refer to as “cross-over posts”, which I love in particular. Rather than discussing a certain gene, these posts should illuminate the way we think and act as scientists. The main reason why we keep including these posts was the very positive reaction that we received to some of our initial motivational posts, including a blog post on how to deal with scientific disappointment. For the current blog post, I have officially requested copy-right for page 218 from the Gospel of Matthew from Trinity College, which holds the copyright for this historical document. I really appreciate the support that the institution gave me for this, which started with a very engaged discussion between me and the staff of the Trinity College gift store, who motivated me to get in contact with the custodians of the digital archive. Soon, there were emails pointing me into the right direction and I eventually got what I needed – the license to publish a copy of p.218 on Beyond the Ion Channel. But why was it so important to me to get access to this single page?

Scribes and mistakes. Here is the short answer: I simply liked the way that the 8th century scribes dealt with their mistakes. Page 218 is actually a page that is a duplicate in the Book of Kells. And writing such a single page probably took several months for one of the highly skilled scribes who had to coordinate his Kells-writing activities with typical monasterial duties and defending their home against the Vikings. So just imagine his surprise when his head scribe walked up to him and said: “Don’t freak out, but I just wanted to make you aware that the guy next door had already completed the same page over a year ago”. You can still see the blood draining from the poor scribe’s face; he may have collapsed, he may have let out curses in old Irish and thrown his ink pen through the room. Or he may have simply accepted this fact and said: “Ok, it’s still a beautiful piece of work. Let’s keep it in the Book, but let’s indicate that it is duplicate page”. And this is just what the scribe did. He drew red crosses around the page to let people know that the page was a mistake, but kept it as a part of the larger book. He basically owned up to his mistake, but still found a way to have his effort appreciated.

Scientific mistakes in 2017. How do we deal with scientific mistakes in 2017 and how is our current culture of owning up to them? Before discussing this, let’s quickly review what a scientific mistake actually is – it is not about your hypotheses that did not stand the test of time, but true mistakes: samples mix-ups, mistakes in calculating values that nobody else picks up on, or interpreting obvious artifacts as signals. Also, mistakes are not about intentional wrong-doing. Mistakes are about all these things that should not happened, but that still occur on a regular basis as we are human. What happens to these mistakes and where is the place for them in modern science?

The peer review. I think it is fair to say that we are ashamed of mistakes. In 2017 it would constitute a scientific nightmare if one of your publications turned out to be the product of a scientific mistake. Just imagine what would happen if your study on gene expression in mice with and without epilepsy which found a significant difference in an interesting gene network turned out to be the product of a broken scanner for gene arrays or due to an overlooked typo in your statistical formulas? Once this would be discovered either by you or your colleagues, you would probably approach the journal and ask for a retraction of your publication, considered the ultimate humiliating experience of the modern scientist that will be documented for eternity in PubMed (link). I am exaggerating to make a point: why are retractions so bad, and why is it so hard to live up to them? Why is the statement that we are the author of a retracted publication difficult for us, while we are in full admiration of the 1200-old duplicated page in the Book of Kells?

Retractions. One reason is that retractions often point towards scientific misconduct. A 2012 study in PNAS finds that only 20% of retractions were attributable to error, while two thirds of retractions were due to misconduct, including fraud, duplicate publication, and plagiarism. Also, the percentage of publications retracted because of fraud has increased 10-fold since the 70s. Therefore, you already find yourself on difficult grounds if you consider retracting a publication, even if it is for the most appropriate reason. You will find yourself compared to the Lancet retraction of the Wakefield publication that allegedly showed a connection between vaccinations and autism, which turned out to be a scientific fraud. Websites tracking scientific retractions such as retractionwatch.com often appear as journalists of scientific misconduct rather than neutrally tracking retractions as a window into the scientific process, which is the website’s stated mission. It leaves you with the notion that scientific mistakes in publications better not happen to you.

Making mistakes. There is the counter-argument that we don’t have enough retractions in the scientific sphere and that the high emotional and administrative burden of retractions actually prevents some of the publications from being retracted that should no longer be part of the scientific body of knowledge. Everybody makes mistakes and even the most established scientists sometimes make very stupid mistakes. Admitting mistakes is always shameful, especially when your work has been published, but in principle, it is just a matter of time that such a mistake will happen to you. Therefore, we should not treat scientific mistakes as a taboo, but find ways to find a proper place for them in science. In 1200 years, it would be great if people looked back at our mistakes in the same way that we admire the duplicated page 218 in the Book of Kells.