Happy 400. Even though I have to admit that my blogging speed has decreased considerably over the last 18 months, we managed to celebrate a small milestone last week. We published blog post #400. As there are highly popular and virtually forgotten blog posts, I wanted to use this opportunity to draw your attention to five blog posts out there that you might want to know about. 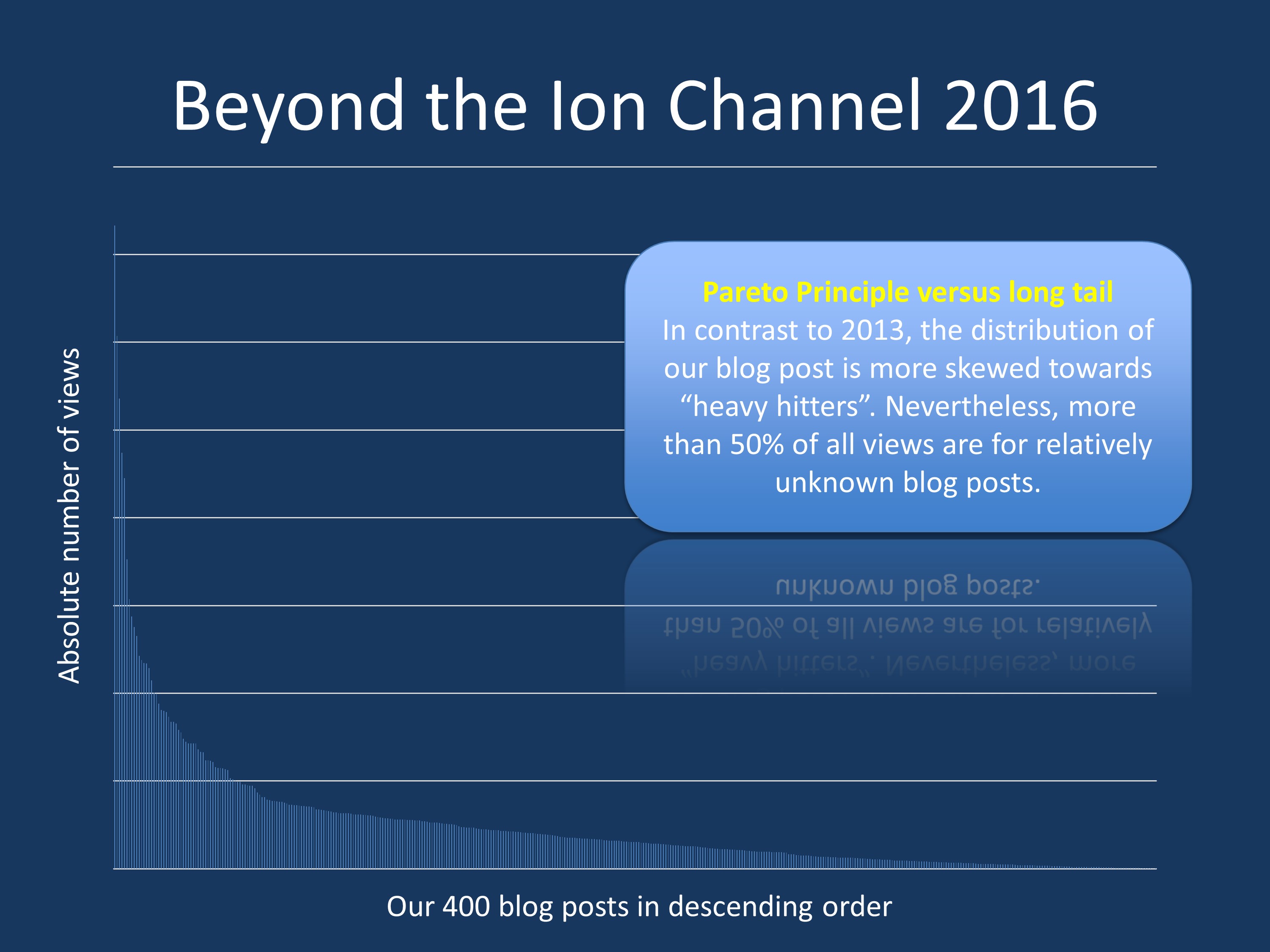 Pareto versus long tail. A brief summary of what your 400 blog posts show us. In contrast to a similar analysis in 2013, the viewing landscape of our blog posts is a bit more skewed towards a few very popular posts, mainly those on SCN1A, SCN2A, and SCN8A. So much for “Beyond the Ion Channel”. However, it is not quite a Pareto distribution (80/20 distribution with 20% of the posts generating 80% of the views). There is still a long tail of less frequently read posts that cumulatively account for more than half of what people read on Beyond the Ion Channel.

Distribution. Blogging offers a great opportunity to understand what drives people to the things that you are writing. When I compared the numbers last time in a previous 2013 post, I had contrasted the business-like Pareto 80/20 principle with the more multifaceted long-tail distribution – the former stipulates that you should put all your efforts into the top 20% as they generate 80% of your readership, the latter suggests that a large collection of diverse content drives the numbers. Why exactly am I boring you with these numbers? I am basically interested in what you are looking for and how the genetic architecture of the genetic epilepsies is reflected in the “search engine landscape” of online epilepsy genetics. Is it all SCN1A, SCN2A, and SCN8A? Yes to some degree, but collectively less than you would think. To emphasize the diversity of our content on Beyond the Ion Channel, I thought that we’ll feature five important posts that have received relatively little attention over the last two years.

The Marrakesh diaries – DNA colonialism
During a scientific visit in Marrakesh in 2012 for a collaborative project on epilepsy genetics, one of my collaborators confronted us with a provocative thought. When researchers from “developed” countries turn towards “developing” countries to recruit patients such as large families that lend themselves to genetic studies better than small families in the home countries, it may look like a win-win situation for scientists from both countries at first glance. However, at second thought we have to wonder whether we are entertaining a biobanking colonialism, exploiting resources without leaving sustainable infrastructure after we leave. For our post on DNA colonialism, click here.

Big data now, scientific revolutions later
I think I really only understood Roland’s 2012 post this year, which basically means that I am fully acknowledging that he is at least 4 years ahead of me in terms of vision. Back in 2012 Roland captured part of a conversation around big data. Yes, this term was already around back then, which may make you wonder what computer scientists think of us when we think we have discovered this phenomenon in 2016. In brief, he was wondering whether we are really going towards big data in the life sciences or whether we are simply entertaining community technology exploration projects using ad hoc solutions. Has much changed since then? Click here.

The surprising truth about your motivation in epilepsy genetics – a 2014 update
The initial post on motivation theory was quite popular, but our 2014 update was published around the time when we changed blogging platforms and may have been lost in the transition for many readers. To read our blog post why science is not about egos, power, status, or money, but about autonomy, competence and connectedness, click here.

Dark social or who is afraid of email
In 2013, Roland and I were part of the SpotOn 2013 meeting on science communication in London. A session in this meeting was dedicated to what is known as “dark social”. Basically, from data mining perspective, journal supplements are nightmares. They are not formatted in a uniform way, not accessible through search engines and may contain important data that we simply cannot find. They are data graveyards. The same applies to email links, attachments and untraceable websites. While you might have the impression that everything is connected online, you are far off. More than 50% of what connects online cannot be traced. While this may have some merits when it comes to privacy, it is a nightmare for scientific data. There basically is a large amount of data out there that we will never find unless we open and read every 80 page PDF manuscript supplement. To read more, click here.

Methusalem proteins in the brain
There were a few publications that I found really fascinating that I wanted to share with you again. A 2013 study in Cell looked at long-lived proteins in the brain and found that histones and nuclear pore proteins live much, much longer than anyone would expect. They basically stay where they are for several years and are not turned over. To find out how this is connected to the Omnivore’s Dilemma, click here.