Here are the most recent blog posts that mention SCN2A

In a nutshell. SCN2A is one of the most common causes of neurodevelopmental disease. Phenotypes include BFNIS, autism/intellectual disability/schizophrenia, infantile spasms progressing to epileptic encephalopathy and severe early-onset epileptic encephalopathy. Movement disorders seem to be common in patients with epileptic encephalopathy. SCN2A encodes an alpha subunit in a voltage-gated sodium channel and is pivotal for neuronal signaling. However, functional aspects remain to be elucidated and there is currently no good mouse model available. Some recurrent variants exist within the encephalopathy spectrum and seem to display a kind of genotype-phenotype correlation but further studies are needed to show if these correlations will prove true over time. 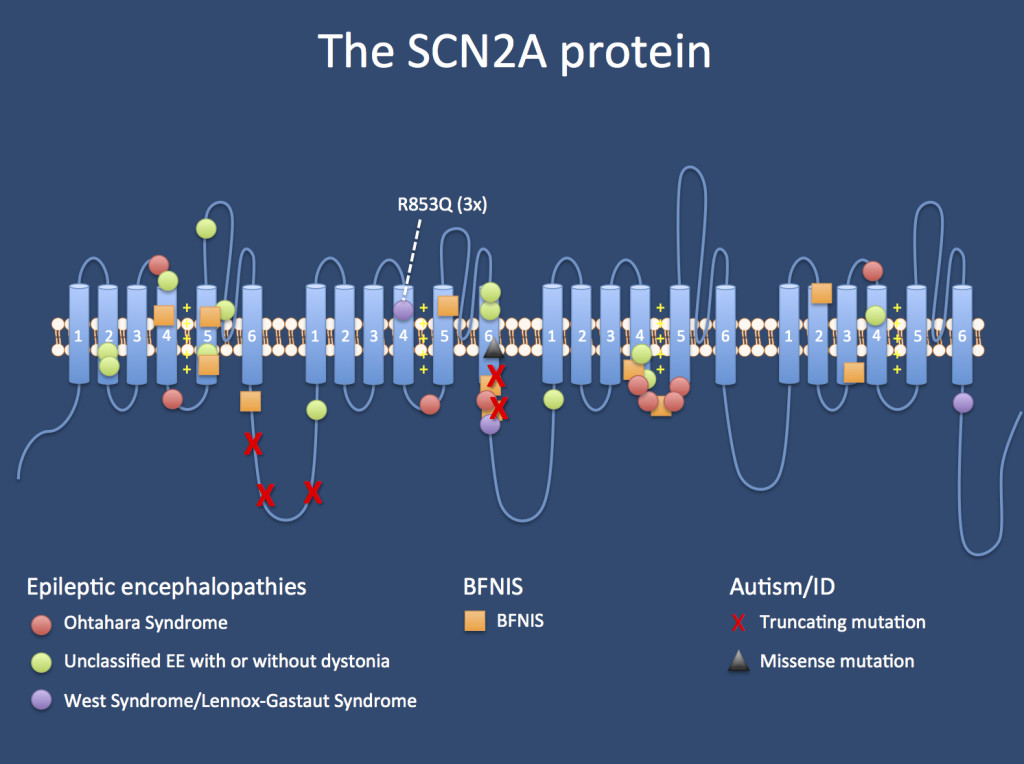 Genotype vs. Phenotype. Phenotypes associated with SCN2A may broadly be grouped into three categories; (1) mutations causing epileptic encephalopathies including Ohtahara Syndrome, unclassified epileptic encephalopathies with or without dystonia, and Infantile Spasms or Lennox-Gastaut Syndrome, (2) mutations resulting in Benign Familial Neonatal-Infantile Seizures (BFNIS) and (3) mutations resulting in autism and intellectual disability (ID). Notably, truncation mutations and gene deletions (not shown) are only found in patients with autism or ID. The information in this graph has been compiled from various sources in the literature, which is referenced in our previous post about SCN2A.

General overview. There is no comprehensive overview of SCN2A phenotypes available to date, and the full spectrum of neurodevelopmental disorders due to variants in this gene is not fully understood. Based on current understanding of the literature, we can breakdown the SCN2A phenotypes into four different groups including (1) benign neonatal or infantile epilepsies, (2) neurodevelopmental/neuropsychiatric disorders, including schizophrenia, autism and intellectual disability, (3) Infantile Spasms, and (4) early onset epileptic encephalopathies, including Ohtahara syndrome, Dravet syndrome, West syndrome and severe neonatal epilepsies. All phenotypes within the SCN2A spectrum can be conceptualized along three dimensions including (a) cognitive outcome, (b) seizures, and (c) movement disorders. Here are the main phenotypes of this spectrum, given in historical order.

Autism, intellectual disability, schizophrenia. After the initial discovery of SCN2A as a gene associated with BFNIS, it became silent around SCN2A. Interestingly, this gene re-emerged as one of the most obvious candidate genes in many neurodevelopmental disorders in large exome studies. Several studies found de novo variants in SCN2A in patients with neurodevelopmental/neuropsychiatric phenotypes including intellectual disability, autism, and schizophrenia. SCN2A variants associated with these conditions are usually truncating, suggesting that haploinsufficiency plays a major role.

Severe early-onset epileptic encephalopathies. There is an entire spectrum of severe epilepsies due to pathogenic variants in SCN2A that start neonatally or within the first two months of life. For some epilepsies, it is possible to classify them into known epilepsy syndromes, such as West syndrome, Ohtahara syndrome or Dravet syndrome. For other epilepsies, a classification is more difficult, and these conditions are referred to as unclassified epileptic encephalopathies. Again, movement disorders seem to be common in this group of severe epilepsies. As of 2015, there is no established genotype/phenotype correlation, complicating the interpretation of genetic findings in this group of epilepsies.

Other phenotypes. SCN2A variants have also been reported in a small number of patients with acute encephalopathy with biphasic seizures and late reduced diffusion (AESD), but the pathogenicity of at least one of these variants has been questioned. At least one of these reported patients had a unaffected parent who had the same variant, making it unclear whether or not the SCN2A variant was truly disease-causing. In addition, SCN2A variants have been reported in at least 4 individuals with neonatal onset (1st week to month of life) of focal or generalized seizures with onset of episodic ataxia in early childhood. Recurrent seizures resolved in all patients by around 1 year of age.

Mutational spectrum. Over 90 different potential disease-causing variants have been reported in SCN2A. The vast majority of these variants are heterozygous missense variants, most of which are associated with an epilepsy phenotype, and have only been reported in a single patient or family. Nonsense variants have also been reported in patients with epilepsy, intellectual disability, and/or autism. A smaller number of splice site and frameshift variants, as well as large exonic or whole gene deletions and duplications, have also been identified in patients with various SCN2A-associated phenotypes. Variants have been reported throughout the SCN2A gene. Table 1 lists some of the disease-causing variants reported in SCN2A. This list is only a small representation of the variants found in this gene. There is currently no publicly available SCN2A-related gene database that includes all published variants. Organizing this data in a phenotype-specific way is part of our Epilepsiome project. Some of the information about de novo variants was taken from the most recent download of the NPdenovo database (see attached table). All annotations were re-annotated with wANNOVAR and SCN2A:NM_001040143 was used as a reference. This list of variants is incomplete and will be expanded in the future to provide you with a better idea about the spectrum of SCN2A-related disorders.

Genotype-Phenotype Correlation. No definite genotype-phenotype correlation has been identified for SCN2A variants to date, and many variants have only been identified in a single patient or family. However, a small number of recurrent variants have been identified in multiple patients with the same phenotype, suggesting that a genotype-phenotype correlation may exist. De novo missense and truncating variants are usually associated with a more severe phenotype, while inherited missense variants are usually associated with milder phenotypes, such as BFNIS. For neurodevelopmental disorders other than epilepsy, variants seem to be protein-disrupting. Truncating variants are generally not observed in patients with epilepsy phenotypes. Some of the variants seen in epileptic encephalopathies are recurrent, suggesting that other mechanisms such as dominant-negative or activating mechanisms are involved.

Considerations for gene level interpretation. First, it is important to establish the strength of the evidence showing that the gene is associated with epilepsy. Some genes may only have one variant reported in a single individual with epilepsy, while other genes may have multiple variants reported in many large families with an autosomal dominant pattern of epilepsy. For SCN2A, there is very strong evidence for its role in human epilepsy.

Considerations for variant level interpretation. When reviewing the significance of a variant, it is important to consider the impact on the gene and the presence of the variant in previously described patient and control populations. Many clinical genetic testing laboratories classify genetic variants into different categories, ranging from benign to pathogenic. Variants that are common in control populations and would not be predicted to have a major impact on the gene/protein are generally classified as benign. Variants are more likely to be classified as pathogenic if the variants are rare or not present in the control population, reported in multiple individuals or families with disease, and likely to have a higher impact on the gene/protein based on the type of mutation or functional studies. Variants with uncertain or limited available evidence may be classified as variants of uncertain significance (VUS), indicating that further information is required in order for the variant to be further defined. In some cases, testing additional family members can be helpful, as it allows the lab to determine whether or not the variant was inherited (versus de novo) and how the variant segregates with disease in the family. Sometimes further classification of a VUS requires waiting for the identification of additional patients or families with similar or nearby variants. The considerations for SCN2A variant interpretation are complex given the heterogeneity of phenotypes.

Haploinsuffiency or dominant negative. SCN2A codes for the voltage-gated sodium channel, neuronal type II, alpha subunit. The SCN2A protein is located at the axon initial segment, the key structure in neurons where the decision is made whether the addition of all excitatory and inhibitory inputs will result in the firing of an action potential. Therefore, the function of SCN2A is pivotal to neurons. While the loss of function obviously results in haploinsufficiency for SCN2A as seen in some patients with autism and intellectual disability, the functional impact of other variants is less clear. There is some suggestion that the missense variants seen in patients with epileptic encephalopathies are activating whereas some of the BFNIS mutations have reduced cell surface expression, resulting in a net loss of SCN2A function. Systematic data on a battery of SCN2A variants implicated in human epilepsy is currently not readily available, leaving some of the functional aspects difficult to address.

Therapy. There is no gene- or mutation-specific therapy recommended for treatment of SCN2A-associated phenotypes at this point in time. A study by Nakamura and collaborators suggested that lamotrigine may be beneficial in patients with transmembrane variants, but additional studies are needed to confirm this observation. Given the vast genetic and phenotypic heterogeneity of SCN2A phenotypes and the variability of seizure phenotypes even in patients with identical variants, a variety of AED effects have been reported that may not be necessarily related to the underlying disease-causing variant. However, given the expanding number of patients with identified SCN2A variants, identifying gene- or variant-specific drug responses is an active field of research in the epilepsy genetics community.

Research studies. The scientific community is currently actively studying SCN2A and its role in human disease. The SCN2A Epilepsiome team is happy to facilitate if you have questions or a specific interest in this gene.

Patient registry. The FamiliesSCN2A Foundation has partnered with Simons VIP Connect on their registry. Learn more at http://www.scn2a.org/ or https://simonsvipconnect.org/.