Family genetics. The analysis of epilepsy families helped jumpstart the field of epilepsy genetics by identifying SCN1A and several other epilepsy genes in the late 1990s. However, more recently, gene discovery in familial epilepsies has been overshadowed by the explosion of gene identifications in sporadic epileptic encephalopathies. A recent publication in Neurology now reviews the results of a decade-long endeavor to characterize familial epilepsies in Israel and Palestine. Find out why we are far from understanding the majority of familial epilepsies, why GGE/IGE families are the main problem, and what the “familial four” are. 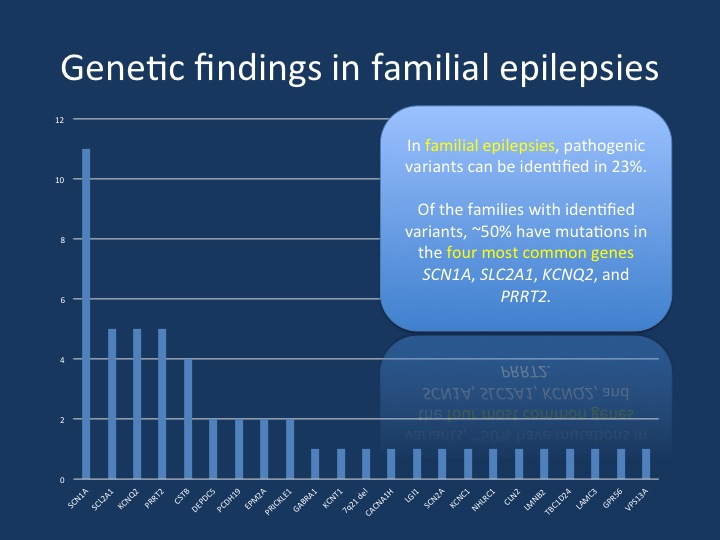 Afawi et al., 2016. The recent publication in Neurology review a comprehensive recruitment and phenotyping efforts in Israel and Palestine, covering 211 epilepsy families in total. In summary, 23% of these families could be explained genetically and 60% of these families have mutation in the “familial four”, SCN1A, SLC2A1, KCNQ2, and PRRT2.

Phase 1. The current Neurology publication with Zaid Afawi and Karen Oliver as the first authors and Sam Berkovic as the senior author is the summary of what was described as “Phase 1” of the Israel Epilepsy Family Project during our 2013 Sde Boker meeting. It is a summary of the clinical features and genetic findings in over 200 epilepsy families from Israel and Palestine who have been recruited, phenotyped and analyzed for more than a decade. This project, simply due to its magnitude and duration, is the definitive publication on genetics of familial epilepsies in 2016. It offers us an interesting perspective on where we are with familial epilepsies in 2016 and what we can expect when we encounter an epilepsy family in clinical practice.

Phase 2. The initial Israel project has laid the foundation for our ongoing Trilateral Grant, which is the natural successor of the first project. Trilateral means that three partners in Israel (Zaid), Palestine (Moien), and Germany (us) are funded jointly. Basically, combining Zaid’s recruitment network, Moien’s genetics expertise, and our exome knowledge, we are planning to take the project of understanding familial epilepsies into the genome era. However, I feel that a detailed summary of this project is a topic for a later post. For now, I would like to focus on three important takeaways about epilepsy family genetics from the current publication.

1 – We are far from understanding the majority of families. Let’s take one step back: 23%? This is it? During some of my presentation, I like to show an upside-down world, indicating how our understanding and perception of genetic epilepsies has shifted in the last three years. With sporadic epileptic encephalopathies, we have arrived at 30-40% of patients who have a disease-causing mutation identified through exome sequencing. You would somehow expect that familial epilepsies, the master discipline of neurogenetics, has a much higher discovery rate. Granted, not all families had exome sequencing, but the success rate is far less than what we are used to from sporadic epileptic encephalopathies, which, by definition, were not included in this study. In 2016, our ability to understand sporadic epilepsies has eclipsed our ability to solve familial epilepsies. We are almost twice as likely to identify a causative gene in a patient with Infantile Spasms compared to finding a gene in a family with three family members affected by GGE/IGE.

2 – GGE/IGE is the issue. Speaking of the genetic generalized epilepsies, these phenotypes are really dragging the number down. If we look at the percentage of GGE/IGE families solved in the publication by Afawi and collaborators, we are in the single digit range (~6%). Coming back to the hypothetical GGE/IGE family with three affected family members. It’s counterintuitive, but your chances of finding a gene are probably less than 10%. This inability to solve IGE reflects what is happening in sporadic cases as well. Even though GGE/IGE has the highest heritability amongst common epilepsy subtypes, this does not translate into gene findings. The genetics of GGE/IGE remain mysterious.

3 – “Familial four”. The ranking of genes for familial epilepsies is unique. Knowing the frequency of genes in epileptic encephalopathies, it is interesting to see what you find when looking at the most prominent genes in the publication by Afawi and collaborators. Basically, four genes (the “familial four”) account for roughly 50% of all solved families. SCN1A is the most prominent gene, which also applies to sporadic epilepsies – it is the main epilepsy gene across the board. This is followed by SLC2A1, the gene for GLUT1 deficiency. Mutations in this gene have been found to be associated with a range of epilepsies, and this variability translates into a relatively high frequency in families. This is followed by KCNQ2, the gene for benign familial neonatal seizures (BFNS). In contrast to the more severe phenotypes in epileptic encephalopathies, familial cases have benign neonatal seizures, which are relatively common. The next gene is PRRT2, the gene for benign familial infantile seizures (BFIS). This gene was only discovered in 2011, and families from this cohort contributed to the initial gene discovery.

CSTB coding for Cystatin B is amongst the five most common familial epilepsy genes. CSTB is the gene for Unverricht-Lundborg disease (ULD), a familial progressive myoclonus epilepsy. While the frequency of CSTB mutations in sporadic EE is negligible, a significant proportion of families in the cohort reported by Afawi and collaborators have mutations in this gene, an expansion of a dodecamer repeat. The frequency of this gene may be overestimated due to the high degree of consanguinity in this cohort; it may be much less frequent in outbred communities.

It is also interesting to note which genes are notably absent from this ranking. SCN2A, for example, is much less prominent in familial epilepsies, even though there is also a mild phenotype associated with certain mutations in this gene. However, in families the frequency is nowhere near the frequency of PRRT2 or KCNQ2.

Why study epilepsy families? When we started the second phase of our Israel project, the trend of sporadic epilepsies eclipsing familial epilepsies was on the horizon. Gene identification in sporadic epileptic encephalopathies has been increasing exponentially, while gene discovery in families has been stagnating. One of my collaborators approached me at our 2013 Sde Boker meeting and raised the question of what family studies would still be good for in a few years. We’ll find genes through sporadic cases, not through families, was his argument. Here is my belated answer three years later: I consider understanding familial epilepsies a challenge. For example, when we traced microdeletions through multiplex families, we found little evidence for segregation. Back then, I started to think that understanding multiplex families will be one of the tasks that we are currently unprepared for. We will need more understanding of complex genetics and more thorough assessment through genome sequencing and detailed annotation. Also, we will need large numbers, even though families sound so simple at first glance. Eventually, this will make genetics in epilepsy families the master discipline again. The final frontier.