Issue 5/2015. Each of these three genes may ring a bell, but the context in which they were described this week is new. Here is our overview of some of the most relevant publications this week. 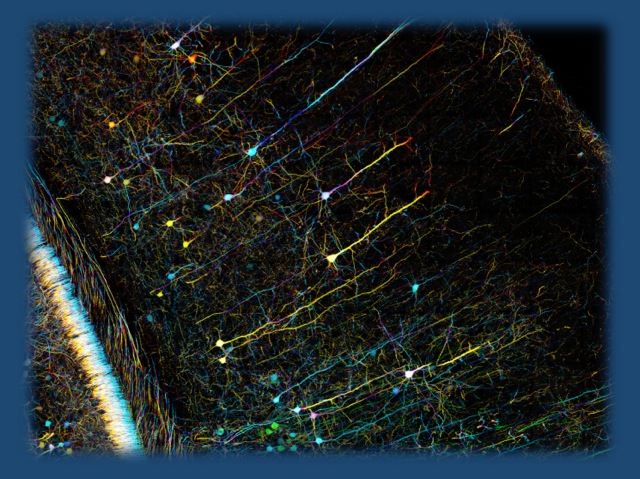 Confocal microscopy of mouse cortex (modified under a CC licence from https://www.flickr.com/photos/zeissmicro/10799674936)

GABRG2. In a recent publication in Annals of Neurology, Reinthaler and collaborators looked at the role of rare variants in genes for GABA receptors in patients with rolandic epilepsy. Mining existing exome datasets, they found rare variants in GABRG2 in roughly 2% of patients, but only in 0.1% of controls, suggesting that these variants may increase the risk of rolandic epilepsies. One particular variant (p.G257R) showed diminished levels of palmitoylation, which was demonstrated to be important for receptor trafficking to the cell surface.
Conclusion: For high priority candidate genes, single gene association studies in existing exome datasets may be one option to assess their role in disease etiology.

ALG13. The recurrent p.N107S de novo mutation in ALG13 has been found in at least five girls with infantile spasms. In addition, ALG13 mutations in boys are known to cause congenital disorder of glycosylation type Is (CDG Is), which is characterized by additional systemic features including hepatomegaly, recurrent infections, and increased bleeding tendency with an abnormal glycosylation profile. In a recent publication in JIMD Reports, Smith-Packard and collaborators examine the phenotype of one girl with p.N107S more closely. They find that glycosylation studies in their patient were normal, suggesting that the p.N107S epileptic encephalopathy may represent a different phenotype than CDG Is.
Conclusion: There may be various phenotypes hidden behind a single gene, some of which may be linked to a specific mutation. This may be particularly relevant for X-linked genes. The p.N107S-associated encephalopathy may still be considered if a glycosylation profile is normal.