Top 10. 2014 has been a very productive year in epilepsy gene discovery and with our final blog post this year, we wanted to provide a brief overview of what has been pertinent this year. From the multitude of novel genes identified this year, here are the 10 most relevant findings – including some genes that you probably didn’t expect.

10 – QARS. Mutations in the gene for the synthetase, which attaches the amino acid glutamine to a transfer RNA, were found by Zhang and collaborators in a family with an epilepsy phenotype reminiscent of Malignant Migrating Partial Seizures of Infancy (MMPSI). Since the initial report, other families have been described, suggesting that tRNA synthetase dysfunction, which is known from other neurogenetic disorders, has some relevance to epilepsy.

9 – 16p11.2 dups. Number nine on our list is not an individual gene, but a previously described microduplication. In a large and comprehensive study, this microduplication was found by Reinthaler and collaborators to be risk factor for Benign Rolandic Epilepsy, but not for other types of epilepsy. In summary, this publication teaches us an important lesson on the genetics of the rolandic epilepsies – and it delineates a phenotypic boundary that we thought would not exist.

8 – TBC1D24. The first epilepsy gene identified through next generation sequencing technologies came back in 2014 – as the causative gene for DOORS syndrome, a rare distinct autosomal recessive syndrome with Deafness, Onychodystrophy, Osteodystrophy, intellectual disability (“mental Retardation”), and Seizures. In addition, homozygous or compound heterozygous mutations in TBC1D24 were found to cause a wide range of non-syndromic epileptic encephalopathies. It is the first recessive epilepsy gene with a wide phenotypic spectrum.

7 – PCDH7. It might be a surprise for you that this gene ended up on our top 10 list. Common variants in PCDH7 were found to be a risk factor to both generalized and focal epilepsies in the recent ILAE genome-wide association study. This gene codes for protocadherin 7, a neuronal cell-cell adhesion molecule implicated in synapse development. This finding puts a new emphasis on the microarchitecture of synapse development in the pathogenesis of genetic epilepsies. And yes, the relatedness to PCDH19 is noted.

6 – HCN1. De novo mutations in this gene coding for a hyperpolarization-activated cation channel were found as a novel cause of Dravet Syndrome. In addition to implicating an ion channel in human disease that was long thought to play an important role in hyperexcitability, the publication on HCN1 arose through data sharing under the umbrella agreement of the RES consortium – a good model to connect genetic findings from individual groups within a framework build on a joint agreement and mutual trust. 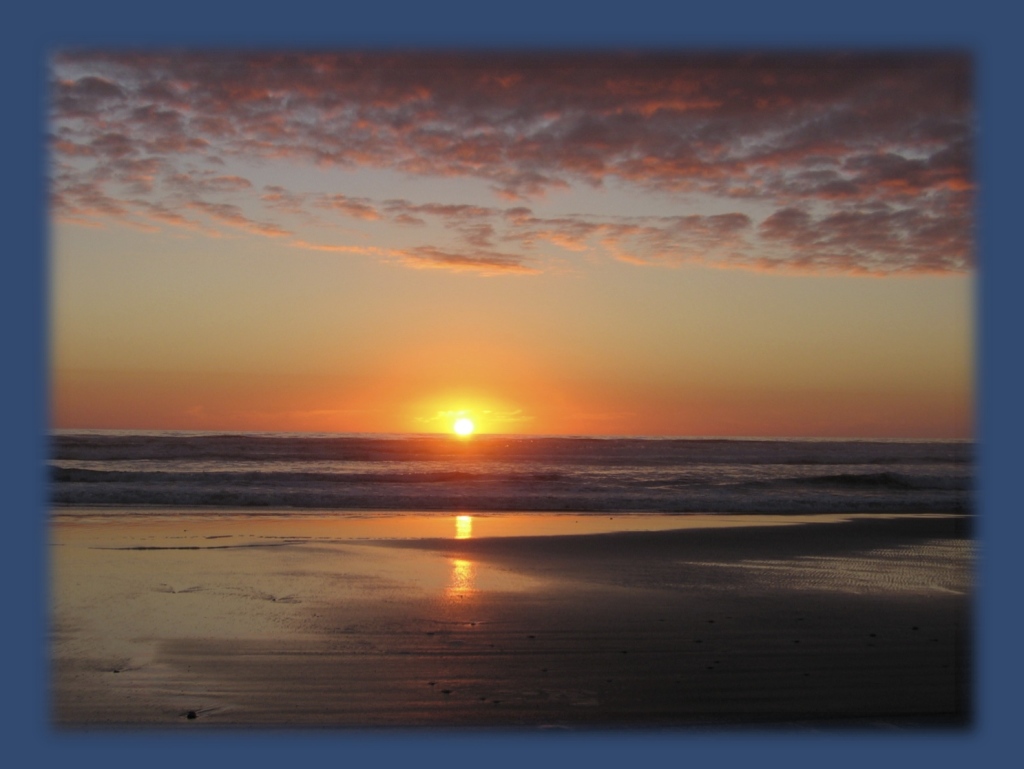 For the last blog post of 2014, I thought that I would share one of the photos with you that we took in Tasmania a few years ago. It’s not just a sunset, it’s a sunset over the largest uninterrupted stretch of water in the world, looking 10,000 km straight from Tasmania to Argentina (if you look close, you can make out a bit of Buenos Aires next to the setting sun). The concept of this very long distance always fills me with a certain awe for magnitude – a concept that will become important in epilepsy genetics in 2015.

5 – DNM1. De novo mutations in the gene coding for Dynamin 1 are a novel cause of epileptic encephalopathies and the most significant finding coming out of our joint European/US E2 consortium (EuroEPINOMICS, EPGP, Epi4K). Within the E2 study, this gene rose above the genomic noise and can now be considered a recurrent cause of epileptic encephalopathies, present in up to 2% of patients with this phenotype.

3 – STX1B. Alright, we’re getting into the top three of 2014 gene findings. Genetic Epilepsies with Febrile Seizures Plus (GEFS+) is one of the classic familial epilepsy syndromes. However, all causative genes for GEFS+ including SCN1A, SCN1B and GABRG2 were found more than a decade ago and gene discovery in this familial epilepsy syndrome has stagnated – until STX1B was discovered. In contrast to other GEFS+ genes, STX1B does not code for an ion channel gene – it is part of the synaptic fusion machinery, highlighting a novel mechanism.

1 – SCN1A. Again? Wasn’t this gene found more than a decade ago? The reason that SCN1A is the gene of the year comes from three well-powered genome-wide association studies (GWAS), which implicated the most important epilepsy gene also in common epilepsies for the first time ever. What do you find if you look at Temporal Lobe Epilepsy with Febrile Seizures (link), at all epilepsy combined (link) or at Febrile Seizures only (link)? Correct, common variants in SCN1A are found over and over again, with a statistical certainty that is beyond reasonable doubt. To us, this represented the most relevant insight of 2014 and we would like to point out the ILAE GWAS as the pivotal study of 2014. We finally have caught a glimpse of the genetic architecture of common epilepsies and rather than leading us astray, it has validated our concepts on the underlying mechanisms.

Happy Holidays. With this final post for 2014, our blog is on hiatus until early next year. In summary, 2014 was an unexpectedly dynamic year for epilepsy gene discovery. We wish all our readers Happy Holidays and we’re looking forward to being in touch in 2015.