Transmitted. When we think about epilepsy-related neurotransmitters, we often limit ourselves to the most prominent transmitters in the Central Nervous System, namely glutamate, GABA and to some extent acetylcholine. However, besides these classical transmitters, there are more than 100 small peptides released in the mammalian brain, which are referred to neuropeptides. Here is the story of galanin, the first neuropeptide in epilepsy genetics. 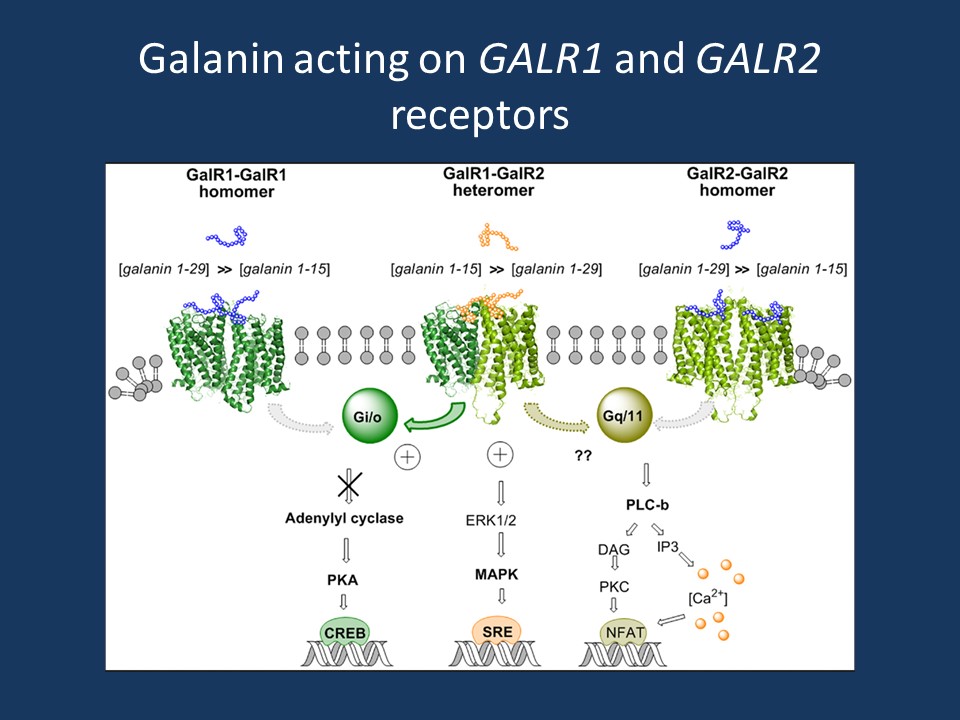 The action of the galanin neuropeptide on the GALR1 and GALR2 receptors. Reproduced and modified under a CC BY licence from an article by Fuxe, Tarakanov, Romero Fernandez, Ferraro, Tanganelli, Filip, Agnati, Garriga, Diaz-Cabiale and Borroto-Escuela in Frontiers in Endocrinology (http://journal.frontiersin.org/article/10.3389/fendo.2014.00071/full).

Neuropeptides. Admittedly, I know very little about neuropeptides, as they are rarely involved in what we are doing. Last time I heard of them was probably in med school with a few references here and there at a later point in time. Let’s recap. Neuropeptides are small peptides, which act as signaling molecules. They are released by neurons and their signal is transmitted through specific receptors. Some neuropeptides may ring a bell, such as the “hunger hormone” ghrelin or beta-endorphin, the endogenous ligand of opioid receptors. Technically, also oxytocin and vasopressin are part of the neuropeptide family. As you can already tell from this list, the role of neuropeptides is diverse. Galanin seems to be a neuropeptide that is primarily involved in modulating action potentials.

Galanin. Galanin acts through its own receptors and has a peculiar effect on neuronal transmission. It is released in an activity-dependent manner, which means that more neuronal transmission results in more galanin released. As galanin dampens glutamatergic transmission, this becomes an inhibitory feedback loop – transmission goes up, galanin goes up, transmission goes down. Galanin is highly potent to suppress epileptic seizures, up to the point that methods of delivering galanin are currently under active investigation for gene-therapy approaches. Most of the galanin in epilepsy-prone brain structures such as the hippocampus come from the medial septal nucleus, which is interconnected with the hippocampus.

Publication. Guipponi and collaborators identified an identical twin pair with temporal lobe epilepsy starting at the age of 13. The overall development of the patients was normal and the epilepsy could be easily controlled through antiepileptic medication in both twins. Through exome sequencing of the family, the authors identified a de novo mutation in GAL, coding for galanin. Given that galanin is actually only 30 amino acids long, finding a mutation in this gene by chance is very unlikely. The mutation in GAL affected binding to the two major galanin receptors, resulting in decreased binding and even antagonistic action, suggesting that this mutation affected the proper functioning of galanin transmission. Given that galanin is highly expressed in the hippocampus, these findings are very intriguing. However, it seems to be a solitary finding as there were no other GAL mutations in more than 500 patients with TLE.

What you need to know. The report by Guipponi and collaborators is a strong reminder that there are more transmitters involved in epilepsy than just the major signal molecules. This intriguing mutation in the relatively small GAL gene suggests that this finding is related rather by occurring by chance. We will see what surprises the galanin story will hold for us in the future.