Nav1.6. For some reason, SCN8A always met some resistance. In contrast to other epilepsy genes, it took a while for the community to embrace this gene as a genuine cause of epileptic encephalopathies. A recent publication in Neurology now investigates the phenotypic spectrum of SCN8A encephalopathy – and points out important features that distinguish this condition from Dravet Syndrome. 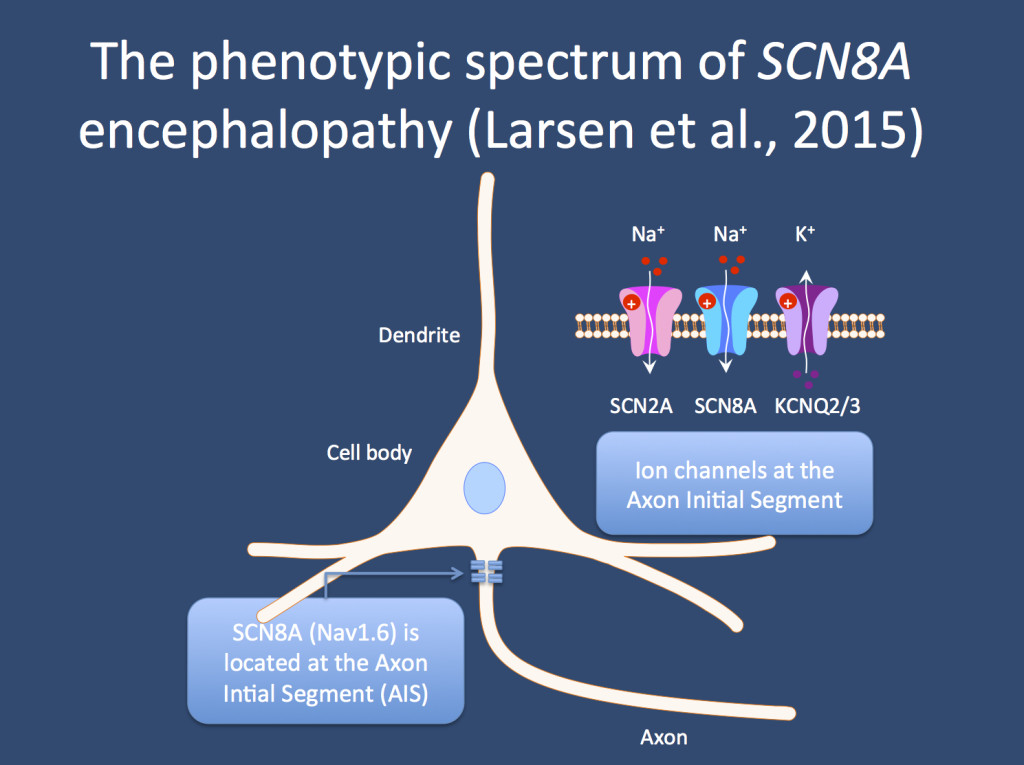 SCN1A. As of 2014, there are three voltage-gated sodium channel genes associated with severe human epilepsies, SCN1A, SCN2A, and SCN8A. Voltage-gated sodium channels allow for the influx of sodium into the cell upon a change of membrane potential – the ion channels are crucial for propagating the excitatory of inhibitory action of neurons along the dendrites, cell body, and axon. SCN1A is by far the most common and best studied voltage-gated ion channel. The SCN1A channel is mainly expressed on inhibitory interneurons, and lack of SCN1A, for example due to a truncating mutation, disruptive missense mutation, or deletion leads to the phenotype of Dravet Syndrome, a severe, fever-associated epileptic encephalopathy. It is well accepted that in SCN1A-related Dravet Syndrome, lack of the sodium channel on inhibitory cells leads to decreased inhibition and net excitation. Basically, the neurons that are supposed to inhibit neuronal activity are reduced in their activity – resulting in too much excitation and epilepsy.

SCN2A, SCN8A. In contrast to SCN1A, SCN2A and SCN8A channels are expressed on excitatory pyramidal cells. Both ion channels are expressed at the axon initial segment (AIS). Given the pivotal location of the AIS, it serves as the neuron’s main decision making center. It is at the AIS, where all the excitatory and inhibitory signals running up and down the neuron are integrated and where the decision is made whether the neuron will fire. Accordingly, changes in channel properties at the AIS can be far-reaching. Understanding the consequences of SCN2A and SCN8A mutations involves two opposite scenarios. First, what happens if the channel is less active, either due to a particular mutation or through a truncating mutation or deletion? For both SCN2A and SCN8A, these questions have been answered. Loss-of-function mutations in SCN2A can lead to autism and intellectual disability, and loss-of-function mutations in SCN8A lead to intellectual disability and ataxia (OMIM 614306). These phenotypes are completely different to the epilepsy phenotypes due to gain-of-function. For SCN2A, likely gain-of-function mutations result in epileptic encephalopathy. For SCN8A, the story was not clear for a long time. The publication by Larsen and collaborators now highlights the fact that epileptic encephalopathy is a common consequence of likely activating mutations. 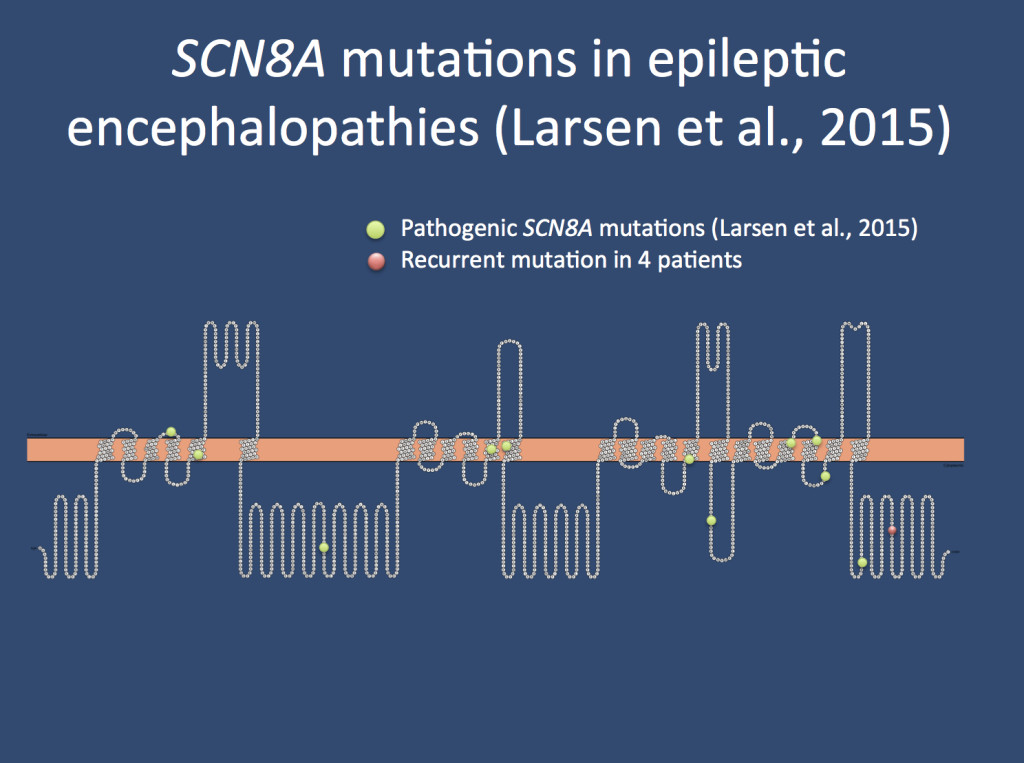 Spectrum of the SCN8A mutations identified by Larsen and collaborators.

The SCN8A spectrum. On average, patients with SCN8A encephalopathy start having seizures at the age of 5 months, but the range of onset is very wide. Also, there are wide differences in the severity of the epilepsy, ranging from milder focal seizures to epileptic spasms with hypsarrhythmia. Larsen and collaborators highlight the fact that hypotonia and intellectual disability are common phenotypic features that may be more constant than the variable epilepsy phenotype. EEG features in patients with SCN8A encephalopathy usually do not show the generalized spike-wave discharges seen in Dravet Syndrome, even though the initial clinical presentation may be related. In fact, Larsen and collaborators report that some patients were initially referred for the suspicion of Dravet Syndrome, but eventually turned out to have an SCN8A mutation. The prominent hypotonia, lack of generalized EEG features, and absence of fever-associated seizures are important features setting SCN8A encephalopathy apart from SCN1A encephalopathy or Dravet Syndrome. This distinction is crucial since carbamezepine, a sodium channel blocker, is sometimes beneficial in patients with SCN8A, while it is contraindicated in SCN1A.