Prague. I am sitting in my hotel in Dublin on my way back to Philadelphia, trying to collect my thoughts on last week’s European Epilepsy Congress in Prague. For both Katie and me, it was great to catch up with our colleagues from Europe and Australia. For our European RES consortium, this meeting was an important inflection point – in fact, three years after the end of the funding period, RES is alive and kicking. Here are the five things I learned in the City of the Hundred Spires. 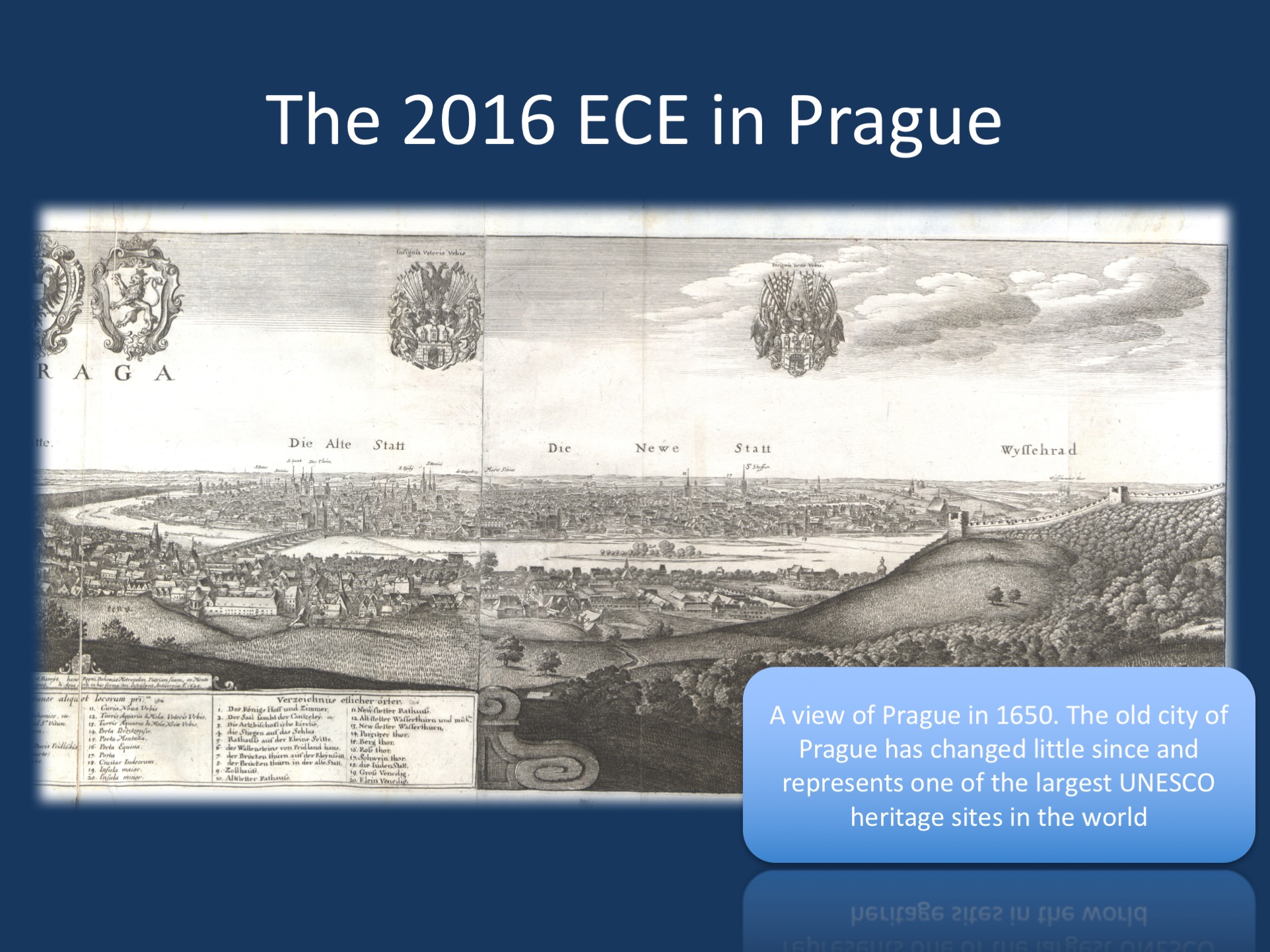 The 2016 ECE in Prague, Czechia. The current panorama of Prague was drawn in 1650 and shows a view of the city including the Hradčany (Prague Castle), which is the largest castle in Central Europe. Prague is so historical that even terms like Nové Město (New Town, “Newe Statt” on this panorama) are misleading – it is new as it was founded by Charles IV (1346–1378), who also founded Charles Univeristy in 1347, one of the oldest universities in the world. My alma mater in Heidelberg was “only” founded in 1386. The image is modified from a historical overview called Bohemiae Moraviae et Silesiae (Merian, 1650), available in the public domain. The current reproduction is by Martin Zeiller – digitized by: UB Düsseldorf, Public Domain, https://commons.wikimedia.org/w/index.php?curid=5768465

The Golden City. I shamefully have to admit that this was my first time in Prague and had I known that the the Czech capital is one of the most beautiful cities in the world, we very likely would have made a trip to Central Europe earlier. Prague, in contrast to many European cities, was neither completely rebuilt at the end of the 19th century nor did it suffer devastating destruction during WWII. The Golden City is the largest urban historical center listed on the UNESCO World Heritage List. In September, the rich and diverse history of Prague served as the backdrop of the 12th ECE. Here are five things that I took away from Prague.

1 – Exomes over time. Prague was the meeting when the exome became two-dimensional. Katie presented her current study on more than 800 diagnostic epilepsy exomes that were reported out by Ambry Genetics during a five-year time frame. The most interesting aspect of this study was the temporal nature of exome studies as she analyzed what happens with exome reports over time. With the ever-increasing data on both control cohorts and patient populations, diagnostic reports change and variants may be upgraded or downgraded. Given the large number of exomes in this study, Katie was even able to put a number on the “reclassification rate”, which may be up to 20% over time. The term “dynamic exome” made it into several other presentations on next generation sequencing in the epilepsies.

2 – CNV. I was asked to talk about Copy Number Variations (CNVs) during the Mendel Symposium. As some of you may remember, my scientific career in epilepsy genetics started with Copy Number Variations, which was a major topic of epilepsy genetics prior to the exome boom. I reviewed what happened to our knowledge on CNVs during the last five years, when our main focus was getting a handle on the genomic data stream arising from exomes and genomes. I had two main messages during my presentation. First, the role of CNVs is more defined in 2016. I postulated a “5%-rule”, which stipulates that approximately 5% of patients with epileptic encephalopathies carry pathogenic CNVs. Likewise, up to 5% of the disease burden in more common epilepsies is explained by CNVs. Secondly, CNVs remain our first examples of rare variants, i.e. genetic variants that have a strong effect size, but are not monogenic. The non-intuitive segregation in families is my prime example on why this distinction is important and I believe that we will revisit this concept once exome and genome data is sufficiently large to perform similar analyses. The behavior of CNVs in families is Kafkaesque and the genetic architecture more reminiscent of the cerebellar dendrites painted by Jan Evangelista Purkyně than the clear inheritance rules postulated by Gregor Mendel (this sentence is a triple-Czech science/literature reference that I have been working on all week).

3 – KCNA2. My memory tricked me in Prague and I was so sure that the mutational spectrum of KCNA2-related epilepsies was restricted to only two recurrent pathogenic variants – we had actually published more pathogenic variants than this in our initial manuscript, but I somewhat had a lapse of memory. Ingrid Scheffer and Katie vehemently objected when I raised this admittedly false fact and Guido Rubboli’s presentation on the first KCNA2 follow-up cohort with more than 20 patients further supported their point. KCNA2 pathogenic variants are increasingly recognized in patients with epileptic encephalopathies and even neurodegenerative disorders. Many patients with KCNA2 encephalopathy have one of the two recurrent pathogenic variants, but the mutational spectrum is in fact much larger.

4 – RES. On Tuesday night, we had the first RES get-together for more than two years, which was coordinated by Katalin Štěrbová and her team. The Czech group has made every possible effort during this week to accommodate the European epilepsy genetics community and on behalf on the entire RES consortium, I would like to thank Katalin, Petra, Pavel, and Vladimir for being wonderful hosts during this week. For our RES dinner many more RES partners showed up than we expected, which was a pleasant surprise and a reminder that there is both a place and need for a consortium like RES in Europe, which maintains its dynamic nature even years after the end of the actual funding period. During the various discussions in Prague a theme emerged: a complete state-of-the-art re-analysis of the entire RES cohort in 2017. The cohort was never published in its entirety and has grown remarkably through add-on projects since the initial funding period. New findings continuously emerge from the RES cohort including a novel pathogenic microdeletions called from exome data that we presented in a poster at the ECE, which was performed by our bioinformatics wiz Ramakrishnan Rajagopalan (Ramki) at CHOP.

5 – The Prague epilepsy genetics group. My favorite day in Prague was last Friday. I was invited to give a talk on epilepsy genetics at the 2nd Faculty of Medicine of the Charles University in the Nemocnice Motol, the bigest hospital in the Czech Republic and the place where our hosts Katalin Štěrbová, Pavel Seeman, Petra Laššuthová and Vladimir Komárek work. In a relatively clever way, Katalin as a child neurologist and Pavel as a medical geneticist and child neurologist have joined forces and developed a state-of-the-art epilepsy gene panel. We spent a few hours after my talk to review variants found in Czech patients with epileptic encephalopathies, which was my very personal highlight of the entire week (“Ingo, do you need another coffee?” – “No thank you, I’m running on Single Nucleotide Variants”). Three findings in very rare epilepsy genes can already be included in ongoing studies including one gene with a likely novel mutational mechanism. The Prague group provides an interesting example on what you can achieve by going into an under-tested patient population with the right collaborative framework. NGS is often not reimbursed in Central European countries and with a functioning collaboration on site and established research network across Europe, even your first steps are academically worthwhile and helpful for your patients.