The story of SCN1A. Variants in SCN1A were first reported in association with epilepsy in 2000, when familial heterozygous SCN1A missense variants were identified in two large families with GEFS+. The phenotype was characterized by incomplete penetrance and significant variable expressivity between family members, making it clear from the beginning that the SCN1A story would not be simple. Within the next few years, we learned that SCN1A variants could cause a wide spectrum of epilepsy phenotypes, including GEFS+, Dravet syndrome, intractable childhood epilepsy with generalized tonic-clonic seizures, and, less frequently, infantile spasms and simple febrile seizures. As it became clear that SCN1A variants played an important role in genetic epilepsies, focus turned towards understanding the mechanism underlying seizure genesis, as well as identifying management and therapy options. Even after 15 years of study, our understanding of SCN1A-related epilepsy is still evolving. Keep reading to learn more about the most recent discoveries related to SCN1A. 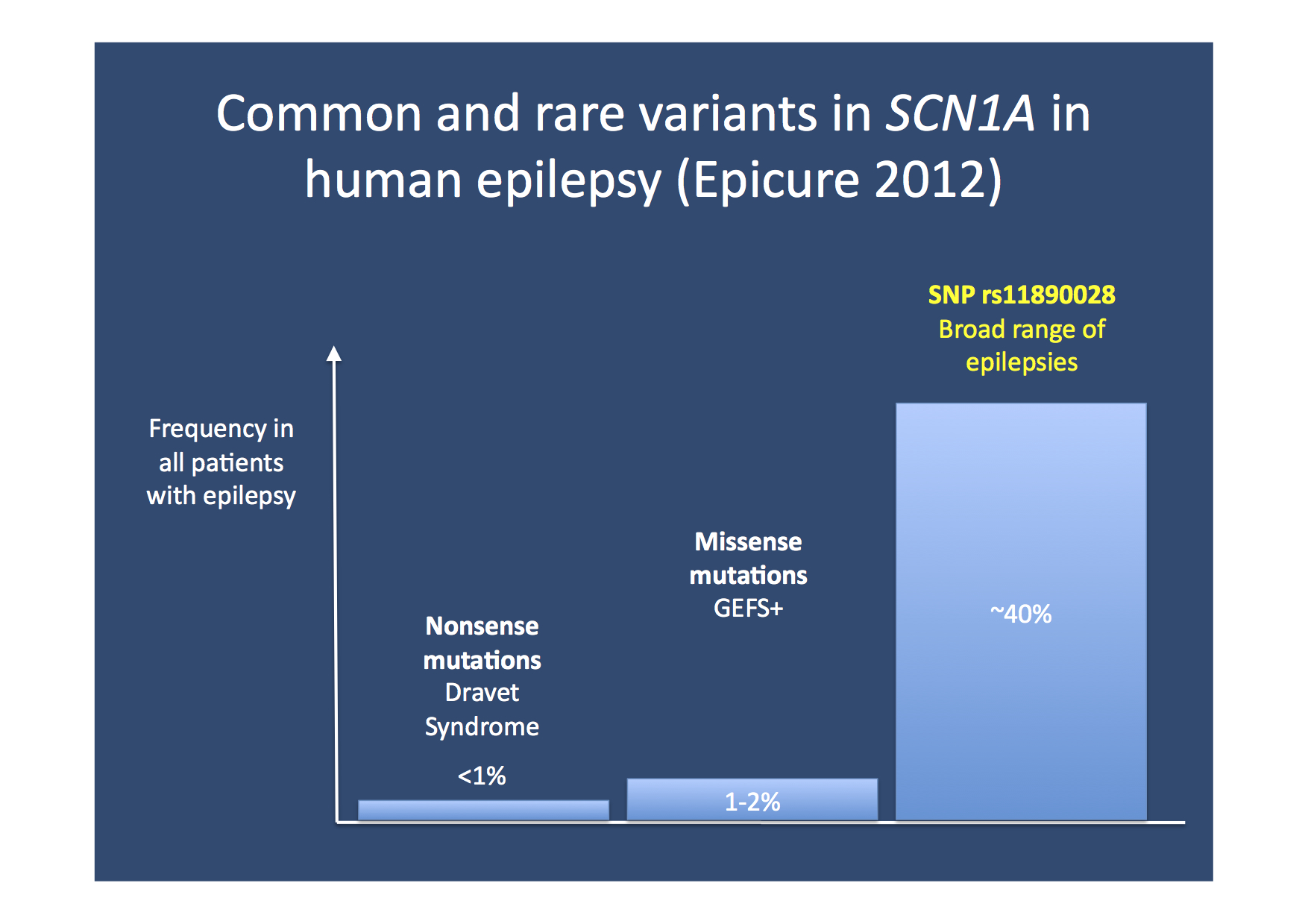 In defence of common variants. The recent EPICURE GWAS identified an intergenic variant in proximity of SCN1A as a common risk factor for a wide range of epilepsies. Even though rare, highly penetrant variants in SCN1A causing Dravet Syndrome receive most of the attention, common variants have a strong impact on the population level. Despite the fact that common variants are also present in a large proportion of unaffected individuals, the population-attributable risk of common risk factors is probably higher than the cumulative impact of mutations causing Dravet Syndrome or GEFS+.

Continued expansion of the SCN1A mutation and phenotype spectrum. Gao and colleagues recently reported the first disease-causing sequence variant of the SCN1A promoter region, leading to almost a 60% decrease in promoter activity. The variant was identified in a girl with febrile seizures and partial epilepsy exacerbated by oxcarbazepine but well-controlled with other AEDs. The girl’s asymptomatic mother also had the variant, consistent with the variable expressivity previously reported with SCN1A-related epilepsy.

What can zebrafish teach us about SCN1A? A recent study by Kumar and colleagues suggests that impaired glycolysis and mitochondrial respiration may contribute to the underlying pathogenesis of Dravet syndrome. In comparison to wildtype, SCN1A-mutant zebrafish had a much slower and exaggerated increase in glycolytic and oxygen consumption rates after an increase in neuronal excitability. At baseline, these fish show features of Dravet syndrome, including spontaneous seizures and hyperactivity. Further studies are needed to verify these findings and further elucidate their implications.

Fenfluramine and Dravet syndrome. Fenfluramine causes stimulation of the central serotoninergic pathways resulting in release of serotonin and inhibition of its reuptake, making it a promising treatment for epilepsy. Initially employed as an appetite suppressant, the drug was withdrawn from common use in the 1980s due to possible association with pulmonary hypertension. However, studies in mice, zebrafish, and humans support an anticonvulsive effect of fenfluramine. Multiple case reports and series have suggesting a promising effect in human patients with various types of epilepsy. Ceulemans and colleagues recently described the beneficial effect in 10 patients with Dravet syndrome who had long-term treatment with fenfluramine. Between this study and a prior study by the same group, seven of the 12 treated patients were seizure free for 2 to 15 years, and 9 of 10 patients had an average seizure frequency of <1 per month during the study. Multiple patients showed mild but stable cardiac valve thickening but none showed any signs of pulmonary hypertension. Although the results of this study are promising, larger studies are needed to further support the safety and efficacy of fenlfluratmine therapy in Dravet syndrome. Wallace and colleagues recently published a nice review of therapy options for Dravet syndrome.