Continued expansion of the KCNT1 phenotype. In 2012, de novo heterozygous KCNT1 variants were first described in six individuals with migrating partial seizures of infancy (MPSI) (Barcia et al, 2012). In the same edition of Nature Genetics, Heron and colleagues (2012) described 3 families with frontal lobe epilepsy with prominent psychiatric features were also identified to have heterozygous disease-causing variants in KCNT1. Within the last 5 years, de novo and inherited heterozygous KCNT1 variants have been found in a number of patients with MPSI and ADNFLE. Yet, there have been no clear genotype-phenotype correlations established. Recently, several studies have identified KCNT1 variants in patients with other types of epilepsy. Keep reading to learn more about the expansion of the KCNT1-associated epilepsy phenotype. 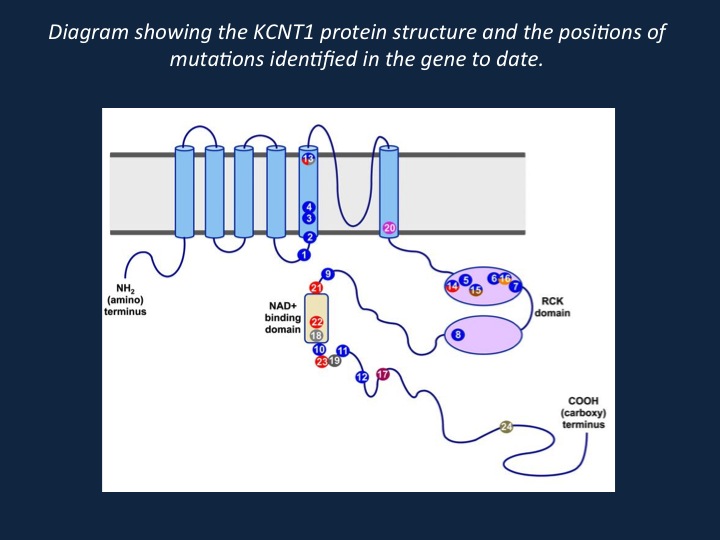 Diagram showing the KCNT1 protein structure and the positions of mutations identified in the gene to date. The KCNT1 protein consists of six hydrophobic transmembrane segments (S1–S6) with the pore-loop between S5 and S6. It has a large intracellular carboxy-terminal region containing tandem RCK domains and an NAD+ binding domain. The positions of missense mutations reported by previous studies are indicated, with different colours denoting different phenotypes. Mutations that are associated with more than one phenotype are marked with two or more colours. The numbers in bold type indicate the number of times recurrent mutations have been observed in multiple families and/or patients. ADNFLE, autosomal-dominant nocturnal frontal lobe epilepsy; EOEE, early-onset epileptic encephalopathy; MMFSI, malignant migrating focal seizures of infancy.
Adapted by permission from BMJ Publishing Group Limited. Chiao Xin Lim et al. J Med Genet doi:10.1136/jmedgenet-2015-103508

Other KCNT1 phenotypes. Within the last several years, KCNT1 variants have been identified in patients with other early-onset epileptic encephaolopathies, such as West syndrome, Ohtahara syndrome, and unclassified EOEE, and focal epilepsies, as well as leukoencephalopathy and leukodystrophy, indicating that KCNT1 variants can cause a broader spectrum of phenotypes than originally suspected. Of particular interest is the co-occurrence of multiple phenotypes with the same KCNT1 variant, even within the same family. This phenomenon suggests that the determination of the KCNT1-associated phenotype is complex and not purely determined by the variant itself but also impacted by modifying factors, such as environmental effects or modifier genes. This complexity can make it more difficult to counsel families about what to expect. To further complicate the phenotype, several recent publications suggest that some KCNT1 variants may be associated with cardiac arrhythmias. Further studies are needed to confirm this possibility.

More KCNT1 updates. Visit our KCNT1 gene page to learn more about other updates on what’s new with KCNT1 and take a look at the additional topics that we have added with our revised gene page content, including sections on the clinical perspective, animal models, references, and research.