Issue 3/2015. This week our publications of the week are about the mechanism behind toxicity of the antiepileptic drug valproic acid in patients with POLG mutations, the phenotypic spectrum of the 15q11.2 microdeletion, and a new large-scale study on the genetics of brain size. 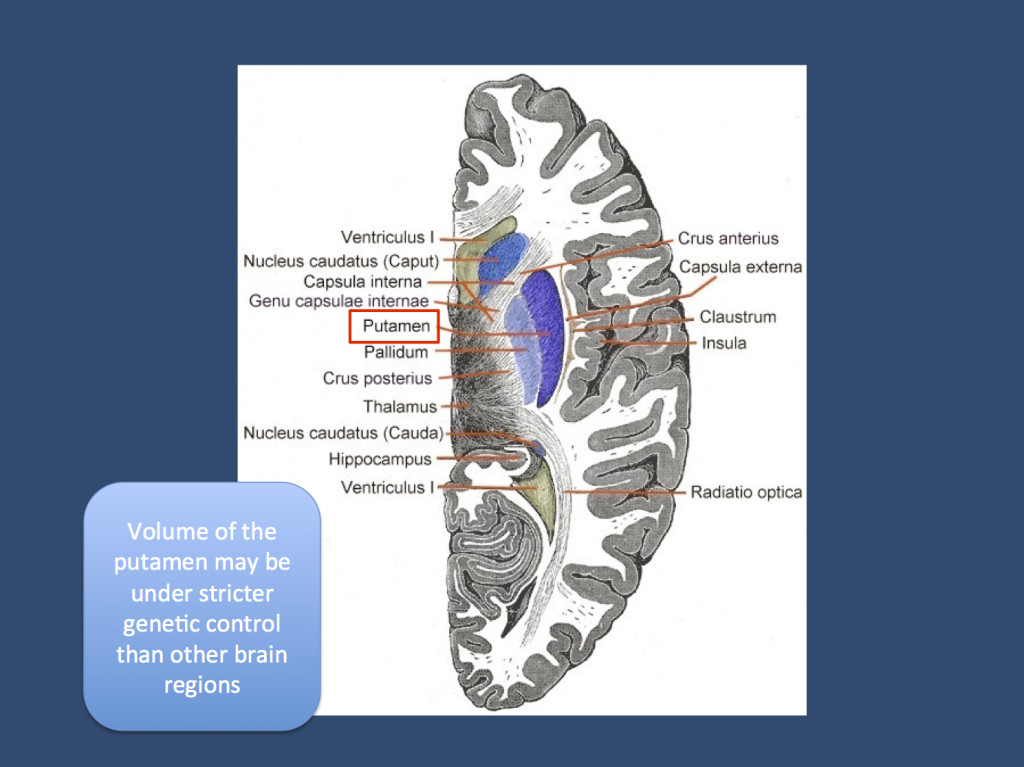 Neuroanatomy of the basal ganglia (modified from Wikimedia Commons, in public domain)

VPA and POLG. Alpers Syndrome is a mitochondrial disorder due to mutations in POLG, the mitochondrial DNA polymerase gamma. Patient with POLG mutations may be particularly susceptible to liver failure when treated with valproic acid, a common antiepileptic drug. The mechanism behind this, however, is unknown. In a recent publication in Hepatology, Li and collaborators generate hepatocyte-like cells from pluripotent stem cells of patients with POLG mutations. They demonstrate that these liver cells are more sensitive to valproate and have an increased opening of the mitochondrial permeability transition pore (MPTP). This pore is involved in mitochondrial apoptosis.
Conclusion: The pathomechanism of antiepileptic drug side effects are increasingly understood. Focusing on the MPTP may be a target for treatment of VPA hepatotoxicity.

15q11.2 microdel. In a recent publication in the European Journal of Human Genetics, Vanlerberghe and collaborators investigate the phenotypic spectrum of 52 patients with 15q11.2 microdeletions. Just as a review, this microdeletion is one of the weaker risk factors for various types of epilepsies, particularly the Idiopathic/Genetic Generalized Epilepsies (IGE/GGE). The authors consider a wider range of phenotypes and find that the most common phenotype of 15q11.2 deletion carriers is speech impairment in 80%, followed by developmental delay in 60% in patients. Epilepsy was only present in ~20% of patients. It should be noted, however, that this cohort is not population-based.
Conclusion: Recurrent microdeletions in neurodevelopmental disorders (“neurodels“) may be need to be considered in a broader context of phenotypes. In contrast to other microdeletions such as 15q13.3, seizures may be less common in 15q11.2 microdeletion carriers.

Brain size and genetics. 300 scientists and 30,000 brains. In a recent mega-study in Nature, the scientists of a large international consortium examined the role of common genetic variants on brain size. They find that, on a population level, between 5-17% of human brain size can be accounted for by common genetic variants. The putamen, a structure in the basal ganglia, seems to be more strongly associated with common variants compared to other regions. Most notably, an intergenic locus in the proximity of the KTN1 gene seems to have the highest effect on putamen size.
Conclusion: Connecting brain imaging and genetics is exciting and requires mega-studies. These investigations help us understand the biological factors that impact on brain development.