A long-awaited answer. Gene discovery in the epilepsies is continuing, and some novel genetic etiologies are quite surprising given that the particular genes had previously been described in a completely different context. One of these examples is TRPM3. In our recent publication, we further define TRPM3 as a gene causative of a variety of neurodevelopmental disorders. Also notably, we find that the anti-seizure medication primidone can be a helpful treatment in individuals with TRPM3. Beyond outlining the TRPM3 spectrum, our publication helped us find a long-awaited diagnosis for one of our research participants, one that took four years to prove. Here is the TRPM3 story. 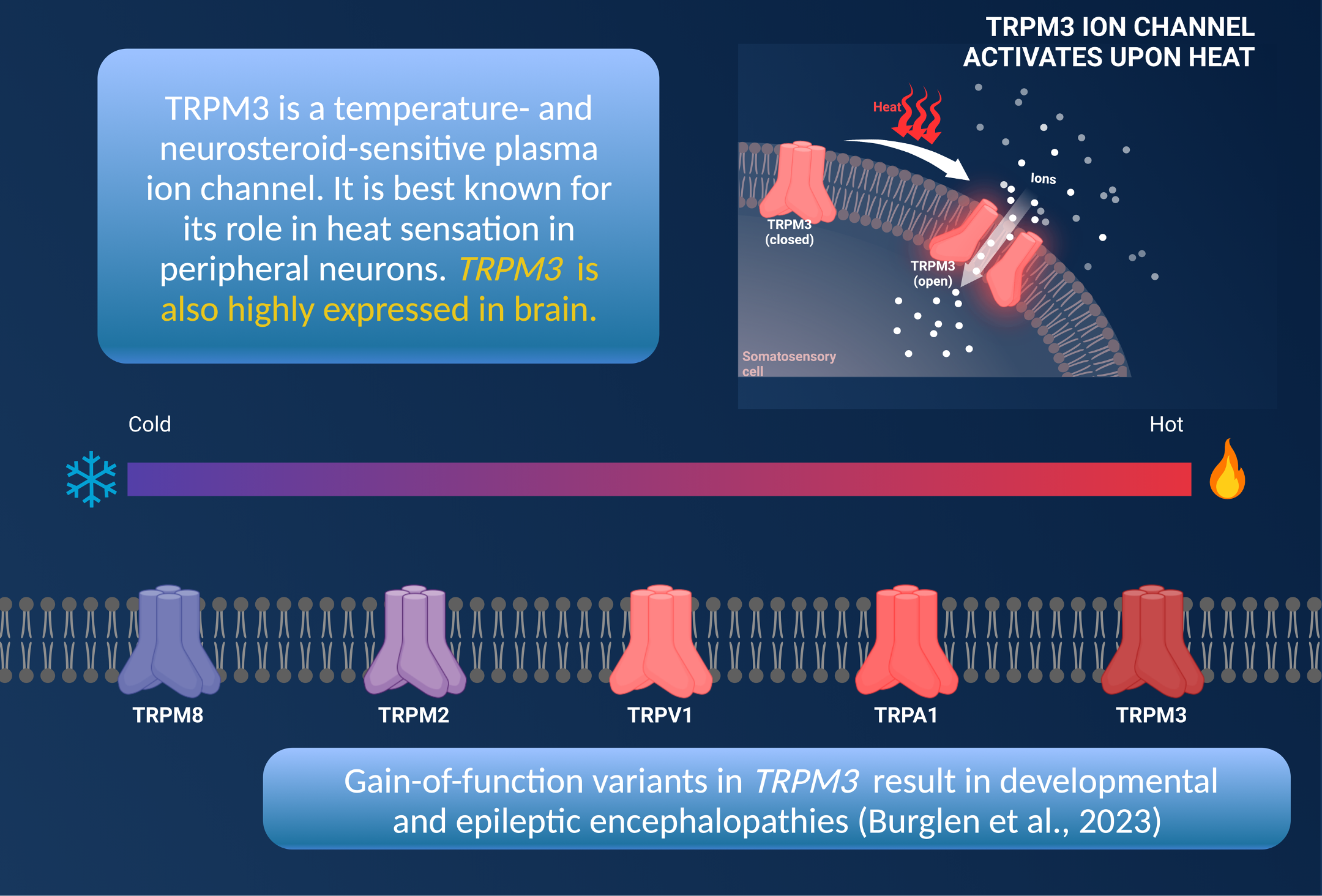 Figure 1. TRPM3 is known for its unique roll in heat sensation in peripheral neurons, yet, it also causes a complex neurodevelopmental disorder. TRPM3 is a calcium permeable ion channel belonging to the melastatin subfamily of transient receptor potential channels (Burglen et al., 2023, ELife).

How does TRPM3 work in the brain? In the past three years, mounting evidence has implicated TRPM3 as a gene causative of various epilepsies and neurodevelopmental disorders. The TRPM3 protein is a temperature- and neurosteroid- sensitive plasma membrane, calcium-permeable cation channel that is expressed in both the peripheral and central nervous system. Within the peripheral nervous system, this protein is known to be involved in heat sensation and the development of pathological pain. Within the central nervous system, TRPM3 is known to be expressed in the hippocampus, choroid plexus, and cerebellum, though its role within the central nervous system is less understood. Primidone, an anti-seizure medication, is a known antagonist of TRPM3, which allows for the reduction of the increased activity of overactive channels. When evaluated in vitro and in animal models, primidone can block the increased basal calcium levels that seem to underlie the pathology of the disease. Evidence is provided in the publication suggesting that this might be a target for precision medicine in the future.

Mounting evidence. Though the role of TRPM3 in the brain remains to be delineated, genetic evidence has mounted in this and other publications to suggest that de novo missense variants in particular domains of TRPM3 lead to gain of channel function, which leads to cellular calcium overload. As a result, people with disease-causing variants in TRPM3 show variable neurodevelopmental differences, including global developmental delay ranging from mild to severe, and epilepsy that can be intractable. Many individuals also experience symptoms that demonstrate the disease’s effect on the cerebellum, including nystagmus, ataxia, and cerebellar atrophy. Though TRPM3 is very likely a rare disease, considering that the position of missense variants needs to be within specific sections of the protein structure to be disease causing, it is likely to provide a meaningful answer in the future for individuals whose neurodevelopmental disorder remains undiagnosed. The story of TRPM3 is just another example of international collaboration leading to the discovery of a rare disease gene.

Genetic counseling in ultra-rare disease. Let me elaborate more on this last thought and digress a bit on a subject I hinted at in the beginning of this post. Internally within our group, we joke that I am “Editor-in-Chief” of Beyond the Ion Channel, as I am generally the final set of eyes on each of our posts. I think I earned this role simply by being a college English major, and it stuck over time. But, interestingly, this post marks the first that I have contributed in full. Therefore, let me use the opportunity to include a more personal reflection. I began working within our group almost four years ago now, and have been a genetic counselor within the clinic and research spheres throughout. During that time, every diagnosis made through the clinic or through our research group has felt like an accomplishment. However, TRPM3 is notable to me, in that the causative variant described in this paper was found at the very beginning of my career here. Now, through this collaboration spanning more than four years, we can call this a diagnosis for all individuals described in this publication. Just this week, we released our updated gene discovery figure, giving an overview of the explosive discovery of genes causative of epilepsy in the past 30 years; with this incremental step made this week with TRPM3, each of those discoveries stretched over the timeline seems all the more relevant.

Sarah Ruggiero is a Genetic Counselor at the Epilepsy Neurogenetics Initiative and Helbig Lab, Children’s Hospital of Philadelphia.