Timeline. There are a few factors converging at the moment that motivated me to write this blog post. Our blog is officially 14 years old, a fact that has generated surprise, but also nostalgia over the weekend. Second, we were asked to provide an editorial for an interesting review paper by the Lal group, which data-mined PubMed to characterize the history of epilepsy gene discovery. And third, I have heard too often that our 2016 timeline of epilepsy gene discovery that is often used in presentations is antiquated. Let us provide everybody with an update in this blog post. But first, let’s start with a seemingly easy question: what exactly is an epilepsy gene? 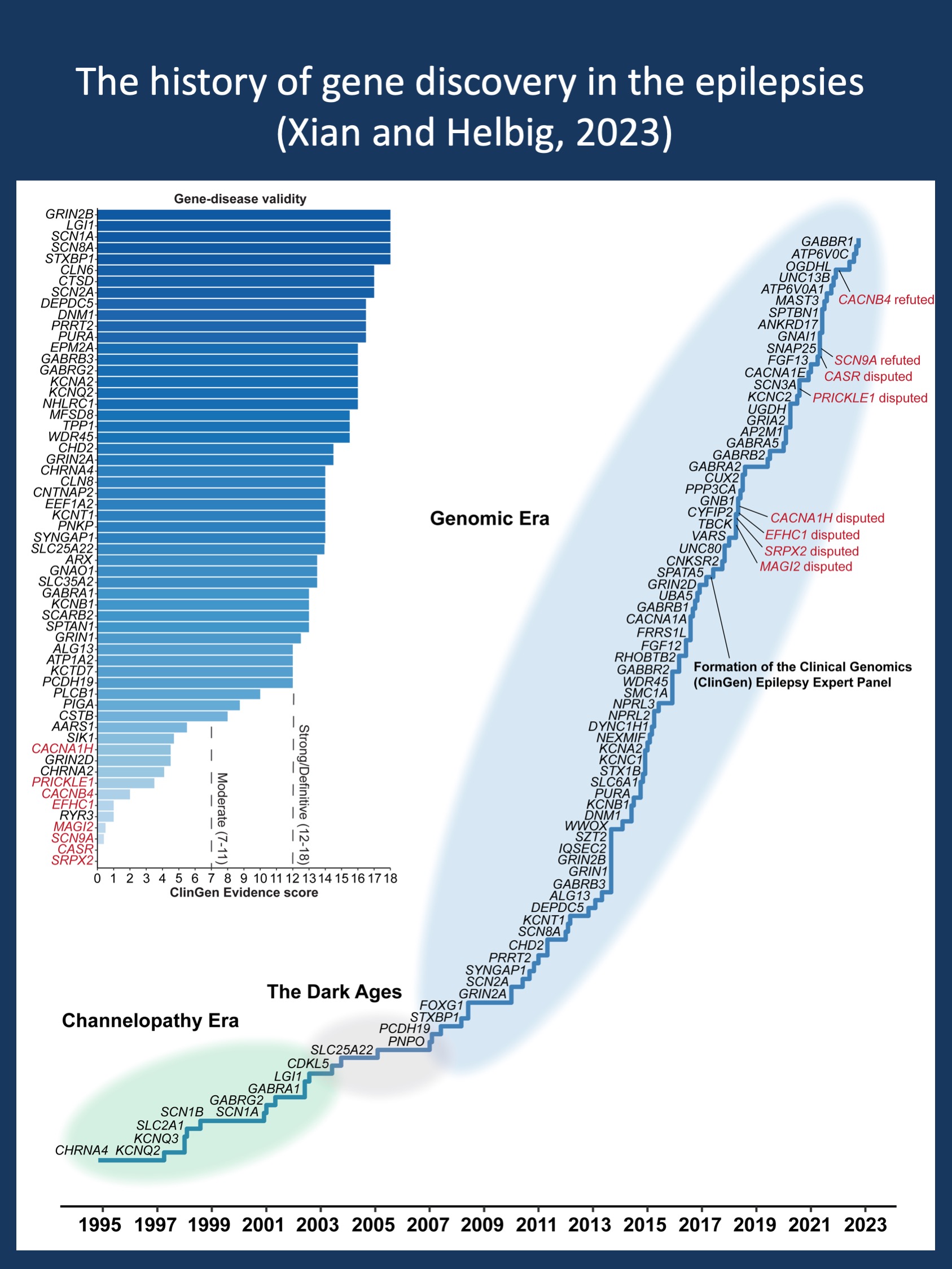 Figure 1. The timeline of gene discovery in the epilepsies, including 126 manually reviewed genes across the three main eras of epilepsy gene discovery including the Channelopathy era, the Dark Ages, and the Genomic Era. Of note, not all genes contributing to the timeline are highlighted, but they are listed in a Supplement. The inset on the left highlights genes official review by our ClinGen Epilepsy Gene Curation Expert Panel (GCEP). Please note that this is v2 of the 2023 timeline and that future iterations may follow.

Where is the list of epilepsy genes? The answer is here. On a regular basis, I receive the question where the list of “epilepsy genes” can be found. While I typically tiptoe around this question and explain the foundation of gene curation as an answer, emphasizing that a complete, curated list other than our ClinGen list does not (and cannot) exist yet, I would like to take a different approach. The link above is a list of 126 genes that I consider valid etiologies for genetic epilepsies, which is the formally correct way to refer to “epilepsy genes”. But was goes into this definition?

Data-driven. In a recent paper in the European Journal of Paediatric Neurology, Macnee and collaborators addressed this question using a data-driven approach. When the authors analyze the available data in PubMed using a computational approach, they identify a total of 738 genes to be associated with epilepsy, which they narrow down to a list of 143 bona fide epilepsy genes. This agnostic, data-driven approach allowed the authors to overcome the issue that I am struggling with – how to combine all the traditions and conventions on what genes count as true epilepsy genes into a single coherent definition. The publication by Macnee and collaborators also goes beyond this initial question and highlights some important aspects. For example, the authors emphasize the dynamic nature of epilepsy gene discovery – the majority of genetic etiologies was only identified in the last decade and a total of 28 genes are frequently reported with gain- and loss-of-function variants. But how does this analysis match with an expert definition?

Definition. Let me start by saying that there is no expert definition of what an epilepsy gene is. However, I would like to try to come up with an answer on how I consider the group of genetic etiologies that I would consider epilepsy genes in the narrow sense. When I started writing my first review in epilepsy genetics (yes, also this was more than 14 years ago), I sometimes used the terminology “epilepsy per se” to differentiate genes for genetic conditions with epilepsy from genetic epilepsies in a narrow sense. For example, many mitochondrial or metabolic conditions present with epilepsy, but I would not consider these genetic etiologies amongst the list of epilepsy genes. My main reason for this exclusion is that these conditions often have dedicated treatment pathways and care teams where these conditions are often closer to other non-neurological conditions in the respective field.

Historical conventions. Despite the tentative convention above, there are several classes of genes that are typically listed among the narrow group of epilepsy genes. These groups include genetic causes for progressive myoclonus epilepsies (PME) such as CSTB and KCTD7 and vitamin B6 dependent epilepsies such as ALDH7A1. These are unwritten historical conventions, and it feels somewhat strange to change this.

Exclusion. Julie and I had the honor of writing an editorial for the publication by Macnee and collaborators. In this process, we combined several lists of identified genes in epilepsy and reviewed all genes manually. A pattern on how we selected genes rapidly emerged. We excluded genes for mitochondrial and metabolic disorders. We also excluded genetic etiologies for Congenital Disorders of Glycosylation (CDG), even though genes such as PIGA or PIGT typically result in severe epilepsies. Furthermore, we did not include genetic etiologies with syndromal presentations. We also excluded genetic causes for neurodegenerative disorders such as Neuronal Ceroid Lipofuscinoses (NCL) and genetic etiologies causing epilepsy in addition to other rare neurological features. One example is ASAH1, a cause for spinal muscular atrophy plus progressive myoclonus epilepsy. The only exception we made was for the following genes that have been classified as definite under formal ClinGen criteria and we included in our list: CLN6, CTSD, MFSD8, TPP1, CLN8, CNTNAP2, EEF1A2.

NDDs. The largest group to be excluded were genes for neurodevelopmental disorders where epilepsy is not particularly prominent, which is probably the most controversial exclusion that we made. Let me state that there is no reliable definition on where we drew this line. In contrast, I tried to consider the current field and conventions in neurogenetics, admittedly from my own narrow perspective at our own center. I asked myself whether an individual with a certain condition would be seen first by our team or our colleagues in genetics, using our past experience in identifying genetic etiologies in >3,000 individuals in our program as a guide. For example, individuals with DDX3X or DYRK1A are likely first identified through a genetics clinic even though a significant subset of individuals may have seizures. However, these are not conditions that I would consider myself or my colleagues to be the primary experts in. Yes, this distinction is arbitrary and may be different at other centers, but I tried to follow our ClinGen distinction for genetic etiologies reviewed in our group or in expert panel for neurodevelopmental disorders.

2023. How should I refer to this list of genetic etiologies that we assembled based on the publication by Macnee, OMIM, and other sources? I would call it the “2023 Channelopathist’s gene list”, a selection of 126 manually reviewed genetic etiologies for the epilepsies. This list is not perfect, but it potentially represents a foundation that we can add to and subtract from in the future (including possible oversights on our end). During our ENGIN teaching sessions, I typically remind our trainees that we need to understand a gene’s “character.” I feel that using this language carries different weight than referring to a phenotypic spectrum or likelihood of phenotypic features and allows for implicit, unspoken knowledge based on our clinical experience. And maybe this is the best definition of what genes made it onto our 2023 gene list – genetic etiologies whose characters I feel familiar with.

This blog post was written by Ingo Helbig, Julie Xian, and Sarah Ruggiero