2022. In December, our blog passed an important milestone – one million views. Given that Beyond the Ion Channel is a niche blog on epilepsy genetics and pediatric neurogenetics, this is a milestone that we are proud of. In the current post, we would like to examine some of the trends on what people read on our blog. Given that this resource has been around for more than a decade, the topics and genes that people searched for reflect some interesting patterns in the field that may tell us about how information on genetic epilepsy is presented online and what we need to do better. Here are top five most frequently read posts, including some topics that surprised us. 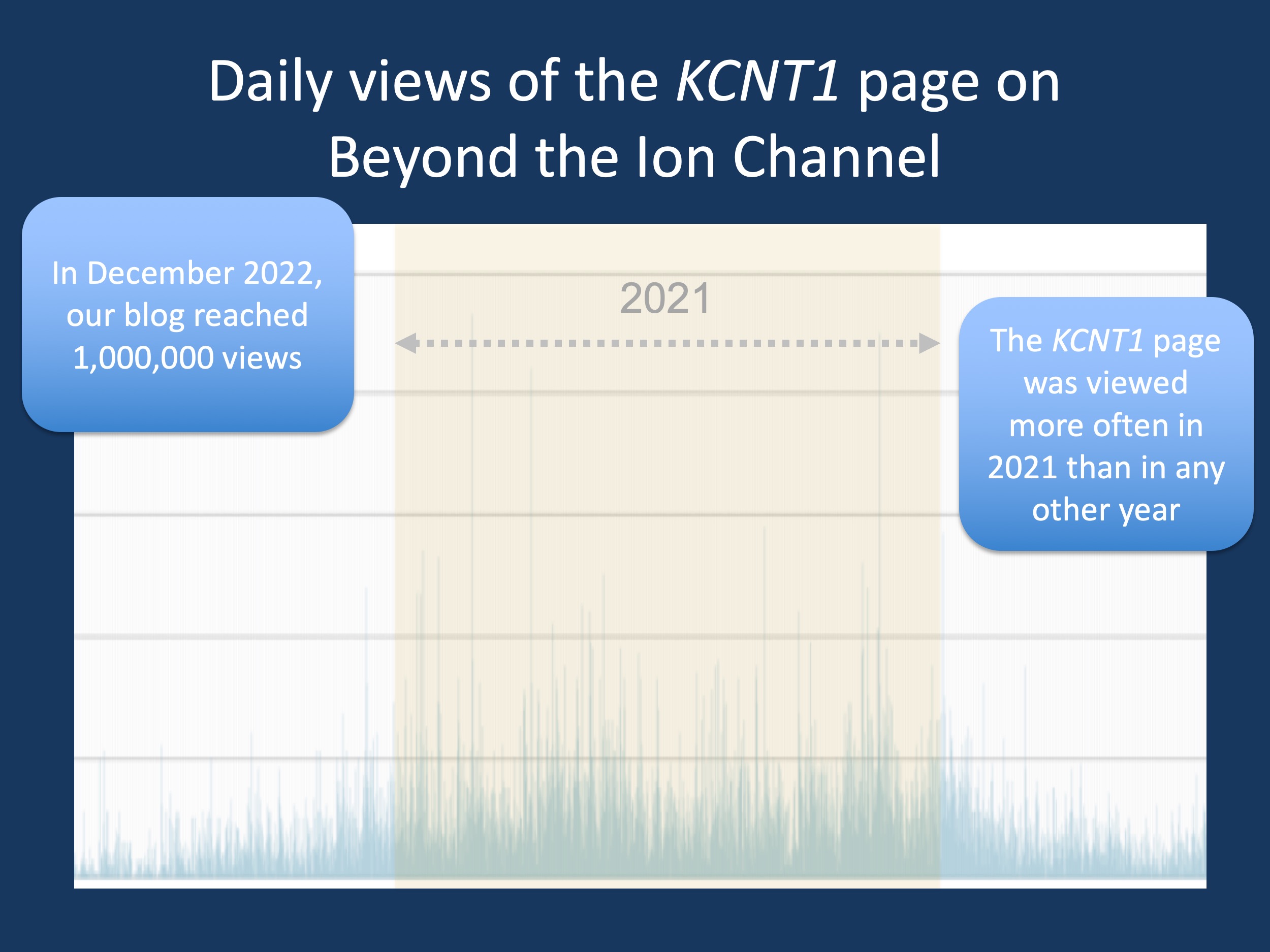 Figure 1. In December 2022, our blog surpassed the mark of 1,000,000 views. The search and view patterns on Beyond the Ion Channel allow us to zero in on trends in the epilepsy genetics field. KCNT1, while a prominent epilepsy gene, surprised us as the second most sought-after gene on our blog (after SCN1A). The high number of views is largely due to an increased number of page visits in 2021, when information on KCNT1 was viewed much more frequently than before or after.

Milestone. The end of the year is typically a good time to summarize what has happened in the epilepsy genetics field over the last twelve months. However, we will leave an overview of epilepsy genetics in 2022 to a future blog post as the end of the year coincides with another milestone on Beyond the Ion Channel. In December, we passed the number of 1,000,000 views on our blog. Accordingly, we wanted to look back at the information on our blog that mattered the most to our audience. Here are the top 5 topics since we started our blog.

#5 – PCDH19. Our gene page on PCDH19 was initially launched in July 2015 and is one of the pages that urgently require an update. PCDH19 is a gene that has changed its clinical picture significantly over time. While the epilepsy component was thought to only be part of a wider clinical spectrum during the initial discovery, the unique sudden and severe presentation of PCDH19-related epilepsies has become more obvious over time, a presentation that may be reminiscent of encephalitis, autoimmune epilepsy, or NORSE/FIRES. Our PCDH19 gene page was most frequently visited in early 2021.

#4 – SCN2A. We have several posts and gene pages linking to SCN2A, which we need to consolidate and refresh as even our 2015 update on SCN2A was within the top 5 most frequently read blog posts ever. Our SCN2A gene page will be the main page to link to going forward, which we will refresh in early 2023. SCN2A remains one of the most prominent epilepsy genes and we expect to see Natural History Studies (NHS) and hopefully clinical trials in 2023. SCN2A-related disorders are also the first condition to which we applied our computational phenotyping techniques by assessing more than 10,000 phenotypic annotations.

#3 – CADD. No, CADD is not a gene, but stands for Combined Annotation Dependent Depletion, a scoring tool for the deleteriousness of variants in the human genome. In brief, CADD is a measure on how likely a given nucleotide exchange is impact protein function and a higher score suggests that a variant is more deleterious. The beauty of the CADD annotation is that you can think of it as a “meta-annotation” that summarizes many other existing prediction tools, derived through a specific machine learning algorithm. In our lab, there is a passionate debate about CADD versus REVEL. Personally, I like to look at the phredded CADD score when we annotate exomes or genomes. Functional annotations will be crucial going forward as they will likely play an increasing role in official variant annotation and ACMG criteria.

#2 – KCNT1. While KCNT1 is a prominent epilepsy gene, we did not expect it to become the second most sought-after epilepsy gene on our blog. Disease-causing variants in KCNT1 cause a wide range of developmental and epileptic encephalopathies (DEE) including epilepsy with migrating focal seizures, a rare but highly recognizable epilepsy. Given that the disease mechanism is gain-of-function, KCNT1-related epilepsies are important targets of ongoing drug development efforts. On our blog, the request for KCNT1-related information had a somewhat unusual pattern. The KCNT1 gene page was viewed in 2021 more than twice as often compared to before or after that year, and the views in 2021 contributed largely to the high ranking of this gene. While we currently do not know why KCNT1-related information was requested significantly more frequently in 2021, search patterns like this may allow us to follow and potentially anticipate trends in epilepsy genetics in the future.

#1 – SCN1A. The fact that our SCN1A gene page was the most frequently read page on Beyond the Ion Channel probably does not come as a surprise. SCN1A-related epilepsies remain the most common severe genetic epilepsies with several ongoing trials including gene-regulatory strategies, novel findings regarding gene expression, and a recent focus on SCN1A gain-of-function variants. Our SCN1A gene page has seen a constant amount of web traffic since the launch in late 2015 and is also one of the pages that require an update to incorporate the most recent findings in the field.

Ranks 6-10. To provide an overview of the other top 10 genes, the gene pages on CACNA1A, SCN8A, KCNQ2, STXBP1, and SYNGAP1 were the most frequently visited pages since the inception of our blog. We will also prioritize these gene pages for an update in 2023 as we already did with the CACNA1A page in November 2022.