What comes next. Earlier this month, Ingo made a bit of a splash at the American Epilepsy Society Annual Course, with his surprising comment that, in some contexts, “genes don’t matter.” This was in reference to transcripts and gene expression, which ultimately determine if and how variants can cause disease. In this post, I wanted to explore this idea, diving into the world of transcripts and their increasing relevance in approaching diagnosis and treatment of genetic epilepsies and neurodevelopmental disorders. And I wanted to share one of the most surprising findings in epilepsy genetics in 2022, namely, how examining transcripts rather than genes helped us understand how an intronic variant can be dominant-negative. 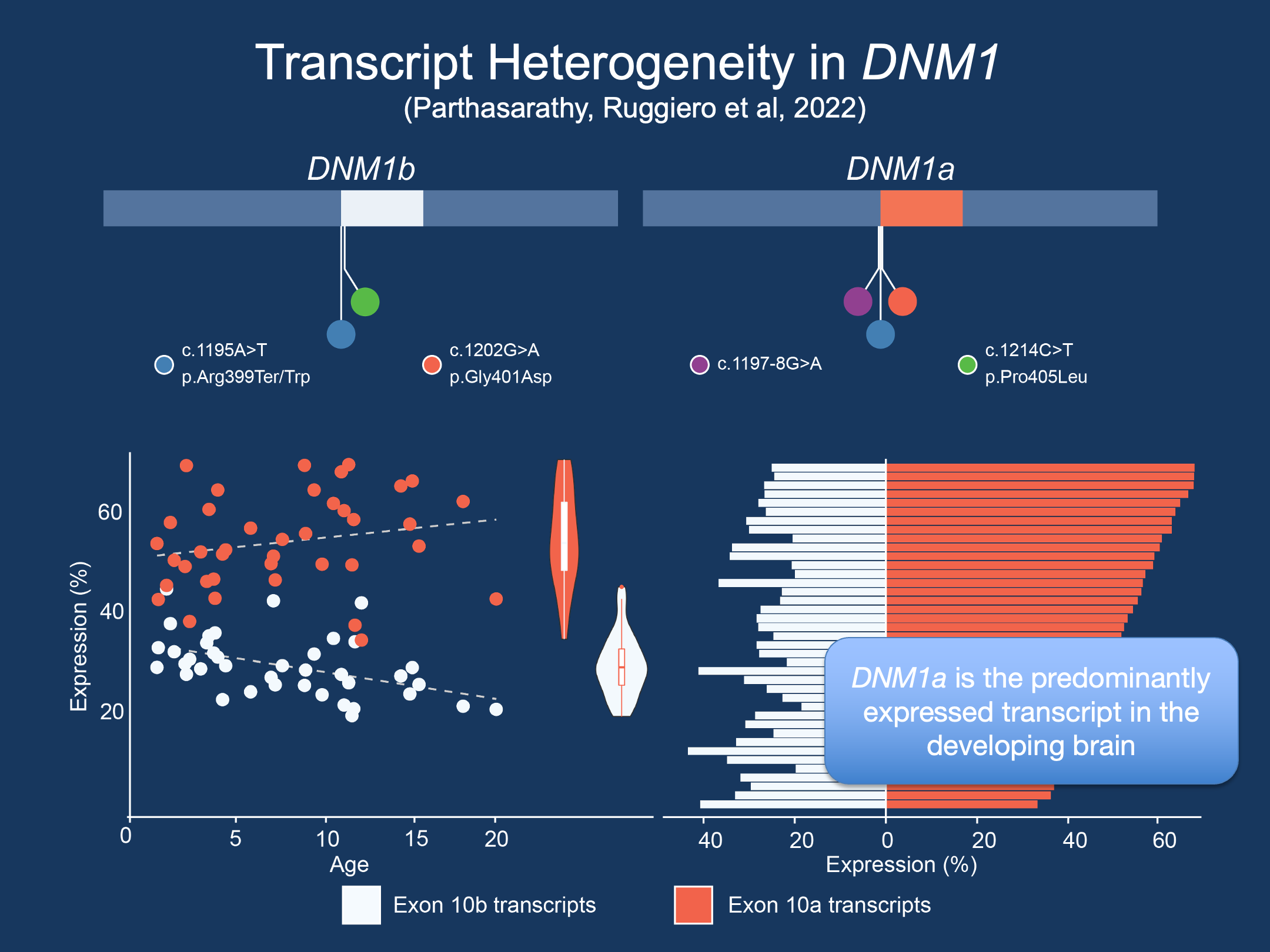 Transcripts in the epilepsies. In general terms, when we think about disease-causing variants, it is important to consider how genes are transcribed, both in terms of quantity and time. This can be a critical determinant of when and how children present with features. A significant complication is alternative splicing of transcripts: as an example, in our work on STXBP1, we described an individual with a variant affecting an alternative transcript that is less abundant in the brain who had a correspondingly, atypically mild presentation.

Transcript confusion. The use of multiple, alternatively spliced transcripts in the literature can make variant interpretation challenging. For instance, the five major CACNA1A transcripts result in difficulty capturing recurrent variants and variant effects on the protein. However, transcripts are increasingly standardized, such as through the MANE project. These standard transcripts are often used as a reference in clinical genetic testing via panels or whole-exome sequencing. Therefore, pathogenic variants in alternative exons represent an important consideration in choosing representative transcripts for genes. In STXBP1, SCN2A and SCN8A, for example, this made it necessary to include multiple transcripts per gene in the set of clinically relevant transcripts.

Defining DNM1 disorders. This all leads to our recent work, now published in AJHG, on DNM1-related disorders, which are known to have a very specific DEE presentation caused by dominant-negative missense variants. These variants affect the GTPase or middle domains of the dynamin-1 protein and prevent normal oligomerization. Perplexingly, we were seeing individuals in our clinic with a typical DNM1 presentation who had variants that seemed to be in the wrong place; that is, they affected an alternative exon of the gene.

DNM1 isoforms. DNM1 transcripts are chiefly distinguished by exon 10. We have two equal-length, alternative tenth exons, referred to as exon 10a and 10b, either one of which is spliced into the final transcript to produce a functional protein. Accordingly, based on this exon, we can label DNM1 transcripts as either DNM1a or DNM1b. The canonical or standard transcript used in clinical testing is DNM1b. However, the patients we were seeing had variants specific to exon 10a. Yet, somehow, these variants appeared to still be disease-causing. So, how did this all fit together?

RNA sequencing. The key here was to look deeper at the transcriptional landscape of DNM1 in the brain. In collaboration with neurosurgery at CHOP, we have been collecting brain tissue samples from children who have undergone resective epilepsy surgery. In nearly 40 of these samples, we have performed mRNA sequencing, which allowed us to assess gene transcripts in the pediatric brain. By quantifying the DNM1 transcripts in each of these tissue samples, we found a clear, surprising insight: DNM1a is more abundant than DNM1b in the brain.

DNM1 brain expression. Despite being in an alternative exon, variants exclusive to this transcript actually affect the majority of DNM1 product in the brain. This results in a dominant-negative effect, causing the typical DNM1 presentation, in contrast to another individual with a variant specific to DNM1b who had a milder presentation. Given that all individuals described with severe DNM1 DEE have variants that affect DNM1a, we were able to pin the disease not to a single gene, but to a single transcript. In effect, DNM1a is the brain transcript of DNM1.

Intronic and dominant-negative. Our study includes another interesting demonstration of the importance of appreciating splicing. One of the exon 10a variants that motivated our study, which was recurrent in eight individuals, was actually intronic, located just a few bases upstream of the start of the exon. Intronic variants can be easy to dismiss clinically, either as having no effect on the transcript or gene product, or as disrupting splicing in a loss-of-function manner. Yet DNM1 disorders are exclusively the result of a dominant-negative disease mechanism, and loss-of-function variants exist in the healthy population. So how could it be that an intronic variant results in a complete, disruptive protein product?

An unusual mechanism. The answer came by way of an international collaboration. An experimental assay confirmed that this variant actually creates an alternative splice acceptor site, leading to six additional nucleotides in the transcript and a corresponding insertion of a pair of amino acids. In the protein structure, this insertion disrupts binding of dynamin-1 subunits leading to a dominant-negative effect—all mediated by a splicing variant. Crucially, this was found by sequencing cDNA from the transcribed product of the mutant DNM1, not the gene itself. This confirms the mechanism of the most commonly reported disease variant in DNM1, a gene previously thought to only have pathogenic missense variants.

What you need to know. Let’s revisit our initial remark: it does seem there are times when transcripts can matter more than genes. In DNM1, sequencing at the transcript level, not the gene level, revealed the mechanism of the most recurrent disease variant. Quantification of transcripts showed us exon 10a was highly expressed in the brain, providing a genetic explanation for several individuals with DNM1-related disorders. In fact, with typical genetic testing that often skips this alternative exon, up to a third of people with DNM1 DEE may be missed, emphasizing that it is vital to sequence disease-relevant transcripts in clinical testing. This adds to a growing story of transcripts playing a significant role in our understanding of the genetic epilepsies. Indeed, not just in disease mechanism, but also in understanding diagnosis and precision therapy in the genetic epilepsies, transcripts may well represent what comes next.

Shridhar Parthasarathy is a Data Scientist in the Helbig Lab, Children’s Hospital of Philadelphia.