Music City. This year’s Annual Meeting of the American Epilepsy Society (AES) took place in Nashville, Tennessee. With a pre-meeting in Memphis and the annual Clinical Skills Workshop as the final event of the annual meeting, our team was able to spend more than a week in the Volunteer State. Yes, there is more than enough music in Nashville and it is virtually impossible to step into a pub, restaurant, or Honky Tonk without live music. Now that my ears have recovered, here is a summary of epilepsy genetics at AES 2022. 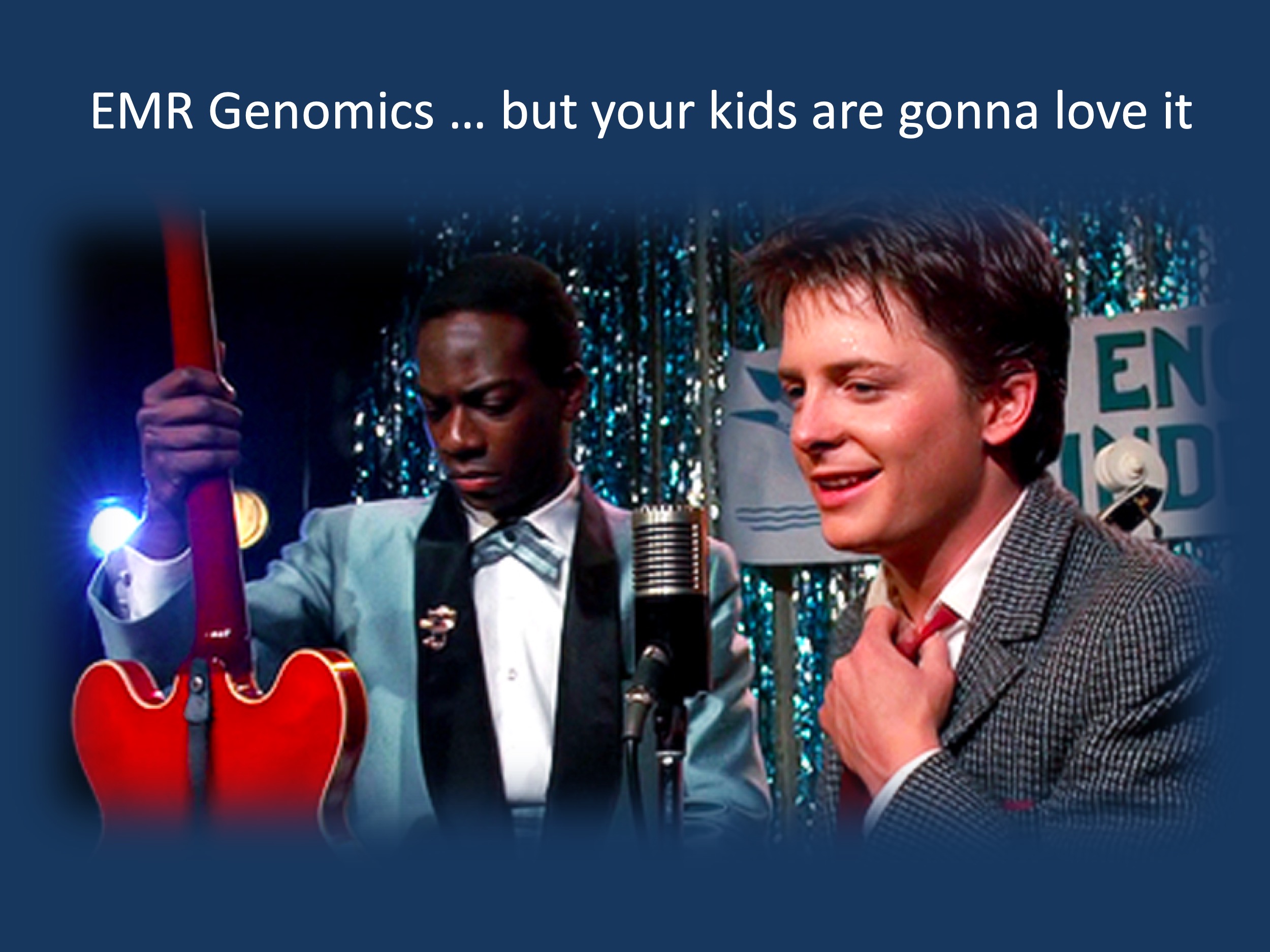 EMR Genomics 2022. In Back to the Future, Marty McFly leaves the audience of a school dance confused when he plays a modern guitar solo. He acknowledges the anachronism by saying “I guess you guys aren’t ready for that yet. But your kids are gonna love it.” This, in a nutshell, characterizes EMR Genomics in epilepsy precision medicine in 2022.

AES 2022. Blog posts about scientific meetings are the hardest, I have to admit. And rather than rattling off new findings in a matter-of-fact style, I thought it would be nice to present some of the most important topics in a thematically coherent way that pays homage to his year’s venue. Accordingly, here are the four most relevant updates in epilepsy genetics in 2022, music-themed. I don’t think it would be possible any other way after a meeting in a city where you encounter live music even in the airport on your way back home.

SYNGAP1 and house music. This was my first year moderating a session in the SYNGAP1 Research Foundation meeting and the meeting was anything but routine for me. Not only did my computer crash while putting the finishing touches on my slides, but I needed to use this very computer a few minutes later to run the session on clinical trial readiness as another computer decided to stop working. The added adrenaline helped me focus as I still consider myself a SYNGAP1 novice, trying to take in the subtleties of one of the most common synaptic disorders. SYNGAP1-related disorders stand out amongst the various genetic developmental and epileptic encephalopathies due to their unusual phenotypic presentation, especially the frequently stormy onset of generalized seizures and encephalopathy that highlight the need for early recognition. In fact, the disease profile in SYNGAP1-related disorders may allow for unique early interventions, which is the reason why understanding the natural history in greater detail has become critically important. As SYNGAP1 represents the fastest growing diagnosis in our epilepsy genetics program, learning to understand SYNGAP1 better has become a major topic for our team. And my feeling of being a student again only intensified when the DJ at the SYNGAP1/SLC6A1 reception tried to play house music, catapulting me back into my high school years. Accordingly, I won’t get “Don’t you want me” by Felix out of my head for the foreseeable future.

STXBP1 and Electronica. When Sarah spontaneously acknowledged that she knew “Nashville Parthenon”, the theme song of our road trip from Memphis to Nashville was clear. To give you some background, I connect this song with driving a moving van through the Melbourne suburbs in 2007 when I was selling our furniture before heading back to Germany. Around the same time, STXBP1 was discovered as a disease-causing gene by Saitsu and collaborators. Now, fifteen years later, our understanding of STXBP1 has advanced exponentially. We had two posters on STXBP1 at this year’s AES. Julie’s poster highlighted our increasingly granular understanding of the natural history by fusing longitudinal disease reconstruction based on HPO terminology with EMR data extraction from data provided by the Ciitizen STXBP1 Natural History Study. Sarah’s poster, in contrast, highlighted a different aspect of STXBP1 disorders, emphasizing unusual clinical presentations that complement the full clinical spectrum of this condition, including very mild presentations that have not been reported previously.

DNM1 and smooth jazz. When walking through Memphis, I looked down and realized that I was actually standing on Kenny G’s star on the Brass Note Walk of Fame on Beale Street. The defining characteristics of jazz include the use of improvisation, syncopation, irregular beats, and solos, and smooth jazz adds a layer of easy listening harmony and predictable musical storylines. This is basically the proverbial description of the most perplexing finding in epilepsy genetics in 2022. At AES, Shridhar Parthasarathy presented his work on an intronic de novo variant in DNM1 that turned our knowledge of DNM1 upside down. His presentation aligned several independent story lines including genetic analyses, gene expression in the pediatric brain, modeling, and electron microscopy. Fusing these disparate elements, Shridhar identified that the main brain isoform of DNM1 is different than previously assumed and that a presumed splice site variant actually created a cryptic acceptor site, leading to an insertion of two amino acids that mediate a dominant negative effect. Shridhar’s work that won an AES Young Investigator Award is now published and now allows us to look for disease-causing variants in DNM1 that had previously been dismissed. In fact, the recurrent intronic variant appears to be the most common DNM1 disease variant, suggesting that DNM1 disorders are significantly underdiagnosed.

EMR Genomics and Rock’n Roll. Developing novel ways to make large-scale phenotypic data derived from databases and electronic medical records (EMR) useful is the engine behind most of the work in our lab. Most of our work presented at this year’s AES is based on the tools and technologies we have developed over the last five years, including data harmonization methods, tools for phenotype comparisons, and methods for longitudinal disease reconstruction. However, these methods are sometimes still met with some degree of skepticism. I tried to compare the difference between traditional phenotyping and EMR genomics to the transition from Sanger sequencing to NGS sequencing. There is lots of validation work to be done, but the amount of potential information is much, much larger than with traditional methods. When I tried to think of a musical comparison, a scene from “Back to the Future” popped into my head. Marty McFly travels back in time from 1985 to 1955 and plays a modern 80’s style guitar solo to “Johnny B. Goode” at a school dance, which leaves the audience uncomfortable and confused. He comments on the awkward situation: “I guess you guys aren’t ready for that yet. But your kids are gonna love it.”