Spüre die Welt. This is the second post in our “phenotypic atomism series”, trying to explain how we can gauge the amount of information that phenotypes provide. However, let me start by going very far back. As a graduation gift, my high school teachers gave me a book that set me on the path of becoming a neuroscientist – the User Illusion by Tor Nørretranders, a book that has a more poetic title in its German translation (“Perceive the world”). This book examined the inner workings of human consciousness and explored how our human brains process information. Now, more than 20 years later, I am encountering the idea of measuring information again when trying to understand what phenotypic information is meaningful and how we can assess this. This is a blog post on how we can describe the value of phenotypic information, the importance of time, and how we slowly chip away at the mystery of developmental phenotypes. To put it differently: “Show me the longitudinal information content (IC) for absence seizures – it is going to be U-shaped and you have 60 min.” 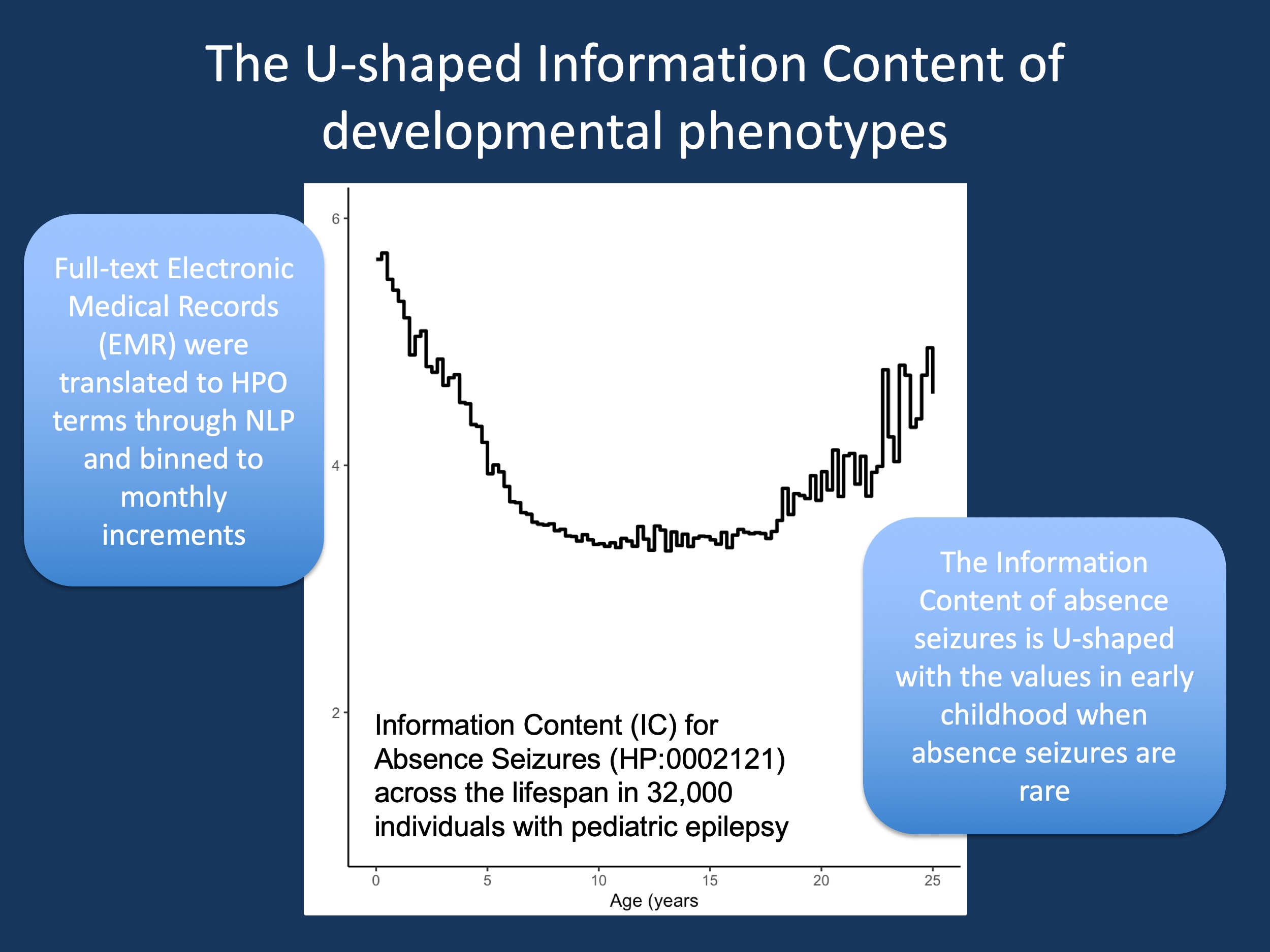 Figure 1. This figure examines the Information Content of Absence seizures (HP:0002121) in our Pediatric Epilepsy Learning Health System (PELHS) dataset of more than 32,000 individuals with childhood epilepsy and Electronic Medical Record (EMR) data. Information from full-text patient notes was translated to HPO terms at scale using Natural Language Processing (NLP) and binning into monthly increments. The frequency of absence seizures was then determined in each monthly time bin and transformed to Information Content (IC), demonstrating a U-shaped pattern with the highest information content in early childhood. This validates the clinical observation that the presence of early-onset absence seizures is much more information that the presence of typical absence seizures.

Chronos and Kairos. Admittedly, I’m using pop psychology here to explain the concept of differential information content across the lifespan. In contrast to chronos, the sequential time, the ancient Greeks had at least one additional concept for time: kairos, the time of the opportune moment. In contrast to the constantly passing chronos time, kairos time stretches and collapses. Chronos is quantitative, kairos is qualitative: nothing happens for a long time and then an opportunity occurs when suddenly everything changes. Let me stop my somewhat amateur references to Greek history here – the point is that while time is sequential, the information conveyed by it and the meaning associated can be quite different within each time span.

Claude Shannon. In contrast to many other pioneers of the information age, Claude Shannon is relatively unknown. However, he was the first person to develop a theory on how communication works, one of the few things I remember from reading Nørretranders’ book more than two decades ago. One of the underlying concepts of information theory is the idea of Information Content (IC), a measure of the value of information. The value of information is always relative. For example, being 6-foot-6 or taller will make you stand out in a crowd – it is a feature that sets you apart from everybody else. It is relatively informative as a descriptor compared to a general population. However, in a group of NBA players, it is the average height, and it is much less informative. Likewise, to use a clinical example, it is rare for a child to have seizures. However, in a pediatric epilepsy clinic, the presence of seizures is not a very distinguishing feature – the value of this information is much lower in the epilepsy clinic.

Information Content. I have used the concept of the value of information in a purposefully vague way so far. However, there is actually a clear definition of it. Information Content is the negative log2 of the frequency of a specific feature in a given cohort. For example, if a feature is present in 50%, the IC is 1. This unit of information is also referred to as a bit – a term that most people are more familiar with. If a specific feature is present at a frequency of 1:1024, its IC is 10. Accordingly, it is possible to stratify information based on this. Less frequent features in a cohort are more informative while more common features are less informative. Our prior work on understanding phenotypic resemblance and similarity is based on this idea.

IC over time. One important aspect of developmental phenotypes is the fact that clinical features emerge and disappear over time. For example, Infantile Spasms typically occur between the age of 6-9 months. It would be unusual (but possible) for Infantile Spasms to occur much earlier or much later. The main point of this blog post is that this somewhat trivial consideration actually has some wide-ranging implications. Infantile Spasms before the age of 3 months are much less frequent. Hence, they have a higher information content before the age of 3 months. Hence, they factor into any comparison of phenotypes much more heavily than the same features occurring within the typical age range.

IC of absence seizures. Last week, I tasked Julie and Danielle from our group to examine just that, looking at the longitudinal Information Content of Absence Seizures. I gave them the seemingly military-style instructions: “you have 60 min. Oh, and by the way, it is going to be U-shaped.” However, before you might get a wrong sense of the general atmosphere in our lab, please let me explain. I said this with a smile on my face as this was meant to be a teaching point. We actually had all the data already, as we were currently working through one of the largest, harmonized datasets on pediatric epilepsy that had ever been generated: patient notes of 32,000 individuals mapped to standardized Human Phenotype Ontology (HPO terms) and binned to monthly time increments. Julie and Danielle literally only had to click a button.

Why does this matter? We typically use terms such as “deep phenotyping” or “extensive clinical information” in a relatively casual way. However, the way that we use these terms actually reflects our innate understanding on how we process the relative value of information. Common terms are less informative, while more specific terms are more informative. The depth of phenotypes or the extent of information phenotypes hold can actually be quantified and measured. More importantly, it is a characteristic feature: developmental phenotypes (or phenotypic atoms) change over time with respect to their Information Content. Having absence seizures before the age of two is almost twice as informative as having absence seizures between the age of 4-8 years. By translating concepts relating to neurodevelopmental phenotypes into measurable entities, we will be able to use this information more effectively for Natural History Studies and precision medicine approaches.