BPAN. WDR45-related disorders are one of the most common X-linked neurodevelopmental disorders. While initially conceptualized within the framework of rare conditions with neurodegeneration with brain iron accumulation, WDR45-related disorders challenge the traditional concept of neurodegenerative conditions. Most individuals are diagnosed in childhood with neurodevelopmental features. However, the full spectrum of the pediatric presentation of WDR45-disorders has not been fully delineated yet. In a recent publication, we delineate the pediatric presentation of WDR45-disorders. We find that typical outcome measures often fail to capture the full range of features in WDR45-related disorders and that there might be two distinct previously not appreciated subgroups. 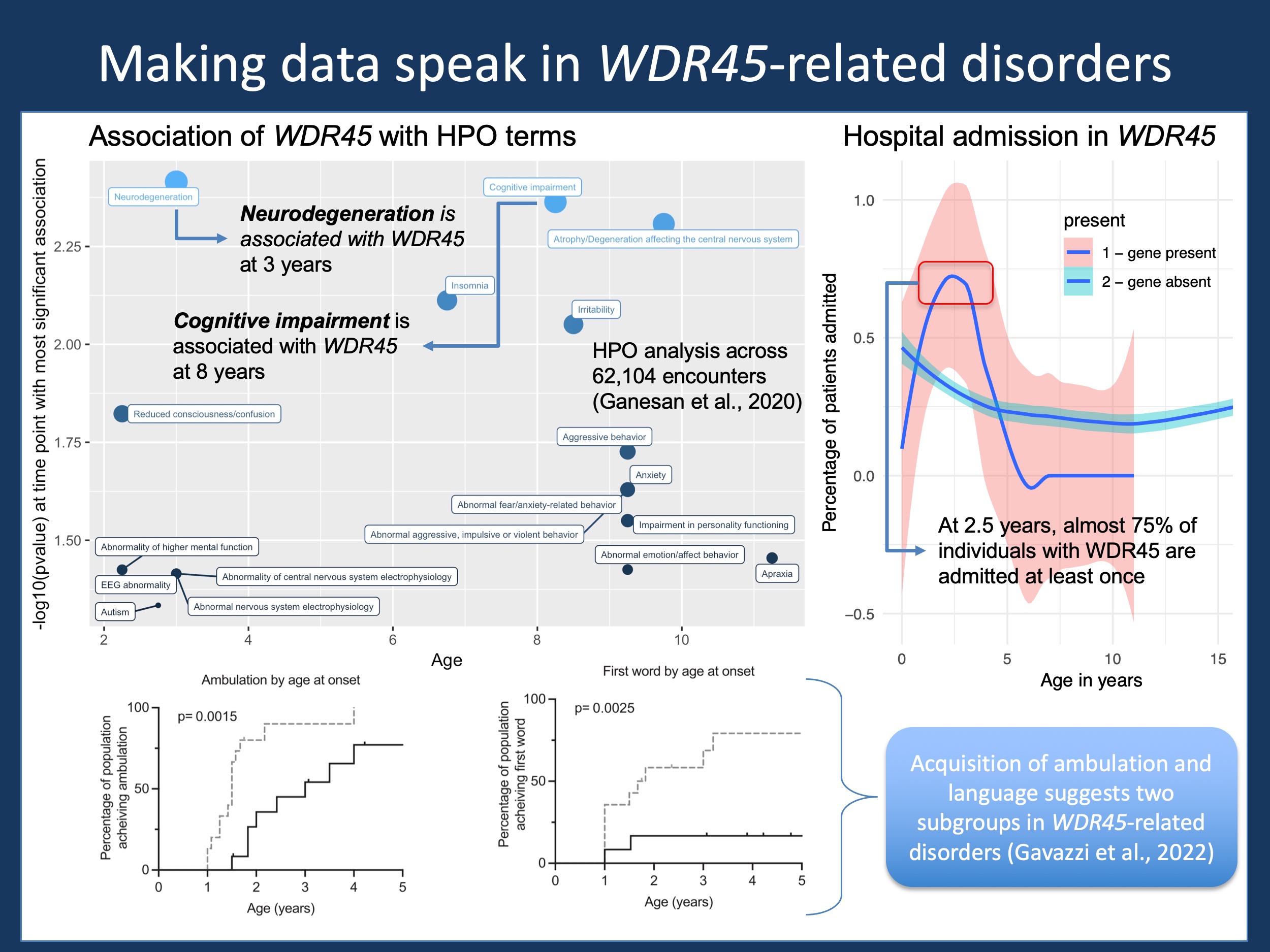 Figure 1. Mining available data on WDR45-related disorders, including information coded in HPO format from Ganesan et al., 2020 (top left) using Electronic Medical Records in 658 individuals with various neurodevelopmental disorders, hospital admission over time of the same cohort, and clinical data with regards to ambulation and language acquisition from our recent study by Gavazzi and collaborators.

SENDA. In 2012, the gene for an unusual clinical presentation was identified: Static Encephalopathy with Neurodegeneration in Adulthood (SENDA). This clinical constellation was characterized by childhood neurodevelopmental features with later regression and neurodegeneration. Movement disorders including dystonia were amongst the features that were described in individuals once they become adults. The MRI finding in this condition was reminiscent of conditions with brain iron accumulation, a group of conditions collectively referred to as NBIA. The gene for SENDA was WDR45, an X-linked gene implicated in autophagy. Given the molecular function of the WDR45 protein as a so-called beta propeller, WDR45-related disorder are also referred to as beta-propeller associated disorder or BPAN.

2 – Early and late-onset subgroups
Is BPAN a single condition or does it make sense to separate our subgroups with different trajectories. In our study, we found that two relatively distinct subgroups can actually be distinguished by the age of onset, defined as developmental delay, seizures, new onset movement disorders, or behavioral issues. If these symptoms occur before the age of 6 months, the proportion of individuals achieving independent ambulation and spoken language is significantly smaller and the age of acquisition is later (Figure 1). However, these differences are not reflected in the onset of seizures. Both subgroups have similar distributions of seizure onset, suggesting that the association between seizure and developmental outcomes is not as strong as we might have expected. In this way, WDR45-related disorders are similar to other neurodevelopmental disorders such as STXBP1-related disorders.

3 – Attention is a limiting feature
Natural History Studies ideally capture a wide range of features, assessing various components of motor development as well as cognitive and language development. However, we found that the acquisition of this information is limited. We had significant issues completing some of the developmental assessments in a significant proportion of our study participants because of attention and behavioral issues. Accordingly, the most reliable test in our study was an abbreviated test for gross motor function, the GMFM-66-IS. Finding that behavior and attention will limit acquisition of meaningful outcome data and will likely be an ongoing issue for many neurodevelopmental disorders and the conclusions from this are somewhat counterintuitive: even though concerns with communication, alertness, and cognition may be the main features driving quality of life, these features may not be the most robust measurements to follow over time. In addition, available scales may be able to capture changes given so-called floor effects, i.e. the inability to differentiate between changes at the extreme ends of a scale. Gross motor function in WDR45 is more robust and may serve as a proxy measure.

4 – Genotype-phenotype correlation
When looking at the two distinct subgroups, we do not find a prominent genotype-phenotype association. Protein-truncating variants (PTV), the most common variant class, is found in both subgroups and is not significantly different between early-onset and late-onset BPAN. While it might be possible that larger cohorts may show differences in specific variant classes, the distinction is not as clear as we would expect. In addition, there is not a clear pattern between male and female study probands with regards to subgroups. Even though WDR45 is an X-linked gene, males with BPAN can have early and late onset presentation. While there is significant variability in outcomes, the cause may not be in the WDR45 variant itself. As discussed in prior posts, this may be due to additional genetic factors such common genetic variants or non-genetic factors.

5 – Additional context using EMR data analysis
For this post, I reviewed some of the EMR data on BPAN that we had captured in our prior work (Figure 1). In contrast to other neurodevelopmental disorders, individuals with BPAN have a significantly higher frequency of cognitive impairment by age 8, supporting some of the findings from our study by Gavazzi and collaborators. In addition, there is a currently underreported disease burden in BPAN – almost 75% of individuals with BPAN are hospitalized between the age of two and three. This is much higher than in other neurodevelopmental disorders at this age and somewhat specific for this age bracket. These two examples demonstrate how a more comprehensive picture of BPAN can emerge when we combine information from different resources.

This is what you need to know. In our study by Gavazzi and collaborators, we assess functional outcome measures in 27 individuals with BPAN. We find that gross motor function is relatively preserved compared to cognition and that we can delineate two subgroups based on age of onset. There are significant limitations assessing comprehensive and time-consuming outcome measures in BPAN due to attention and behavioral issues, which provide value information about the type of scales that can be meaningfully used to capture the natural history of BPAN and related neurodevelopmental disorders.