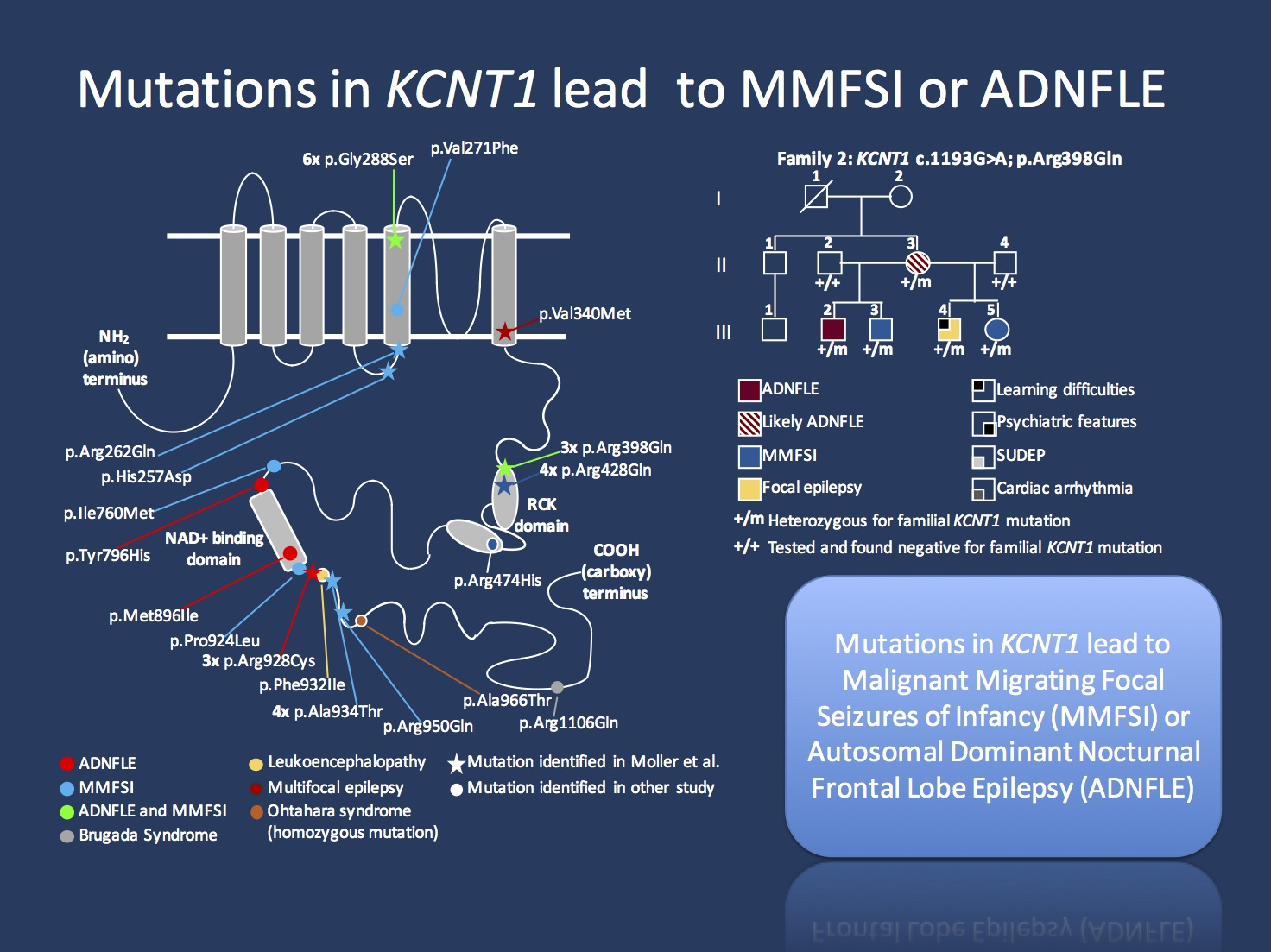 Figure 1. Distribution of the KCNT1 mutations along the protein, demonstrating the clustering of mutations around the functional domains of the C-terminus. On the left side, a pedigree is shown where affected individuals have either nocturnal frontal lobe seizures or Malignant Migrating Focal Seizures of Infancy (non-copyrighted version of the figures provided by the author).

KCNT1. Here is a brief history of KCNT1 and quinidine. In 2012, de novo variants in KCNT1 were identified in epilepsy of infancy with migrating focal seizures and other developmental and epileptic encephalopathies (DEE). Functional analysis of disease-causing KCNT1 variants found a prominent gain-of-function effect, which was shown to be partially mitigated by the FDA-approved antiarrhythmic compound quinidine in vitro. Repurposing quinidine, which was previously approved by the FDA for treating malaria, for treating KCNT1-related epilepsy was reported to reduce seizure burden in one individual with a gain-of-function mutation. Subsequent studies, however, provided a more complex picture that does not allow for a clear conclusion about the efficacy of quinidine in KCNT1-related epilepsies. So what can we conclude from this experience?

Lessons. In retrospect, there are several lessons from the quinidine experience. Candidate therapies can be identified based on the functional effects of disease-causing mutations. Functional studies on disease-causing variants in KCNT1 consistently demonstrate gain-of-function effects, suggesting that inhibition of the mutant channel is a viable strategy. However, poor penetration across the blood-brain barrier and marked cardiotoxicity have made the use of quinidine challenging and the search for highly potent and selective inhibitors of KCNT1 is ongoing.

Screening candidates. One lesson of quinidine is that future development for targeted therapeutics may occur in stages. The initial stage is to systematically test all approved drugs rather than a single compound to identify any available compounds with desirable pharmacological properties, as advocated for SCN8A–related epilepsy. This allows the best candidate for repurposing to be identified. If no approved medicines have desirable pharmacological properties, large screens to find new compounds are required.

Clinical evaluation. Another lesson of the quinidine example relates to clinical evaluation of candidate therapeutics. After the initial report, quinidine treatment was subsequently initiated in dozens of patients, but in a non-systematic fashion, complicating interpretation. Randomized clinical trials will likely be challenging for targeted therapies for relatively small populations. The quinidine example suggests that lack of standardized outcomes across studies further complicates efforts to determine whether quinidine has a partial benefit in individuals with KCNT1-related epilepsies, despite a considerable number of treated individuals. Taken together, despite the urgency to use these medications, adherence to standardized protocols in small clinical studies is critical to allow for clinical data to be meaningfully pooled and jointly analyzed.

What you need to know. Our current mindset for evaluating precision medicine approaches is narrow. We typically expect a black-or-white effect and if a novel compound only has partial efficacy or only works in a small subset of individuals, these compounds are quickly dismissed. Yes, quinidine did not live up to the expectation to become a meaningful treatment for all individuals with KCNT1-related disorders. However, even almost a decade into its discovery in KCNT1-related disorders, we do not know its efficacy. For the future, it is important to keep in mind that repurposed medications likely will never undergo prospective clinical trials. Establishing frameworks such as EMR-based retrospective Natural History Studies attempting to assess comparative effectiveness may be one approach to address this question.