Modifier genes. When I compiled the most important updates on SCN1A genetics a few weeks ago, I forgot one of the most unusual studies that makes you pause and think. To provide some background: ever since the initial discovery of familial epilepsy syndromes such as Genetic Epilepsy with Febrile Seizures Plus (GEFS+), the intrafamilial range of presentations has been a big mystery. Within single families, we typically observe a very broad spectrum of phenotypes. Furthermore, in some families, the range of phenotypes is extreme – the same SCN1A variant may cause Dravet Syndrome in one individual, while other individuals are unaffected. In a recent study, we stumbled upon an unusual cause for this variability: a second SCN1A variant that neutralizes the pathogenic effect of the familial variant. Here is a summary of this unusual story. 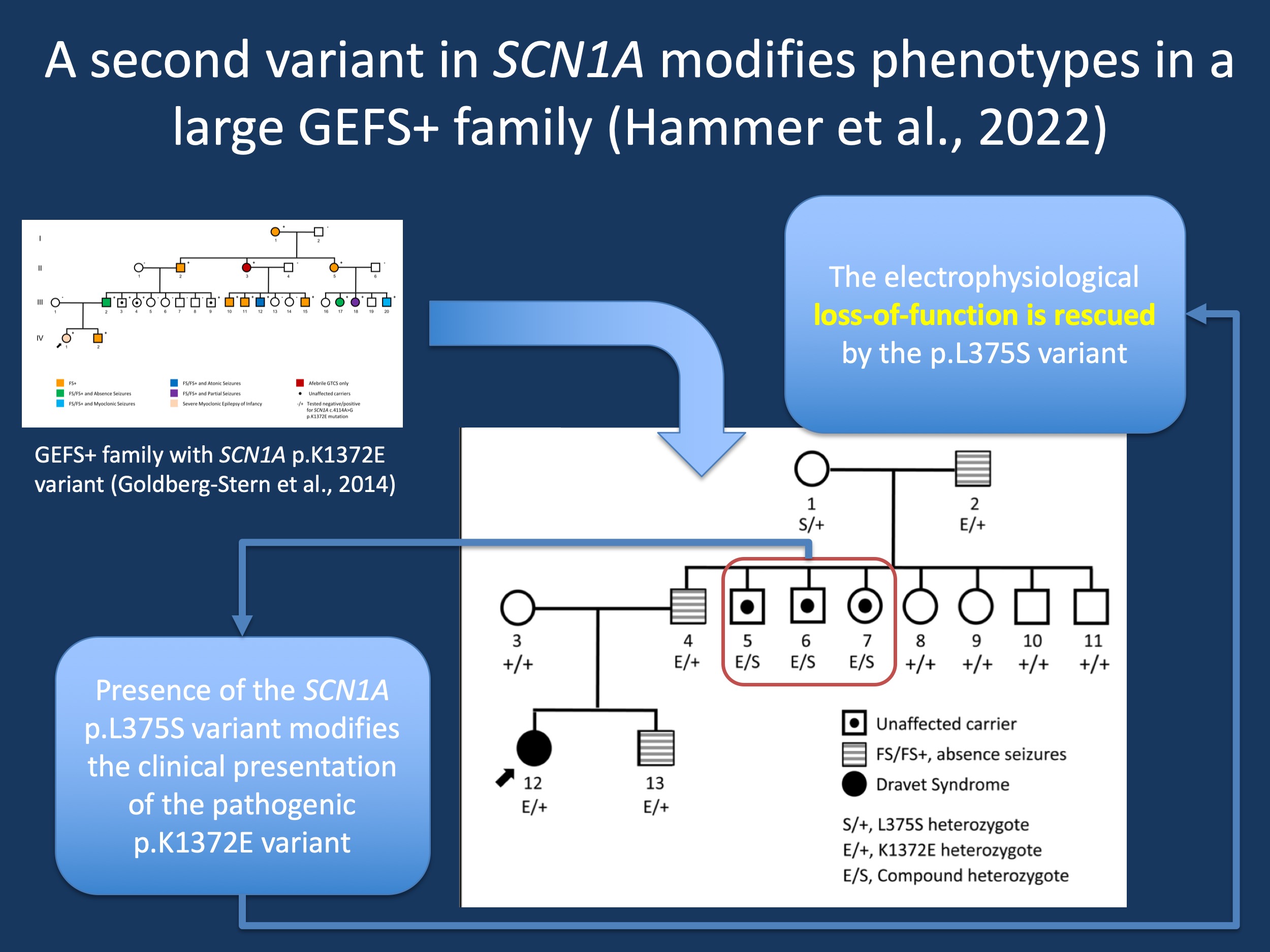 Figure 1. The large GEFS+ family initially reported in Goldberg-Stein et al., 2014 underwent whole-exome sequencing, which identified a second variant in SCN1A in addition to the pathogenic p.K1372E variant. This variant, SCN1A p.L375S, appears to modify the phenotype as carriers of both variants are unaffected. In addition, when co-expressed, it rescues the partial loss-of-function of the p.K1372E variant. Figure modified from Hammer et al., 2022 in accordance with Wiley’s policy for self-archiving.

Modifier genes. Phenotypic variability is a common feature in genetic epilepsies. We know that a single disease-causing variant can have a wide range of presentations in families with autosomal-dominant inheritance. In addition, we know that individuals with identical de novo variants in genes such as SCN2A or STXBP1 can have vastly different phenotypic presentations, which is a common challenge in clinical practice when it comes to counseling and outcome prediction. We typically attribute at least some of this variability to modifier genes, as-yet unknown genetic factors that modulate the clinical phenotype. However, despite almost 100 PubMed-listed publications regarding modifier genes for the epilepsies, none of the suggested factors have been replicated so far – in 2022, we know very little about modifier genes.

The genetic background. A constellation of common genetic variants is often thought to significantly contribute to the phenotypic variability of single variants. While this concept has largely been elusive in the past, recent advances in measuring polygenic risk scores have made the genetic background accessible. For example, we recently demonstrated that polygenic risk for epilepsy basically runs in families. In the study by Oliver, Ellis, and collaborators, we showed that the aggregate effect of common variants already approximates the risk of many copy number variants (CNV) – with the big exception that polygenic risk applies to all individuals and not only individuals with rare variants. The systematic analysis of polygenic risk in epilepsy families is definitely a future area of research, and we have only just started to understand some of the basic principles. However, in addition to PRS, there might be other explanations.

Neutralizing variants. We initially reported on a large GEFS+ family back in 2014, a family in which the phenotypes had an unusually broad range from unaffected individuals to Dravet Syndrome. We found an SCN1A p.K1372E as the causative variant in this family. However, when we screened this family for genetic factors that could explain the range of phenotypes, we made an unusual discovery: there was a second rare SCN1A variant running in this family that segregated with the severity of the phenotype. In brief, all individuals with the pathogenic p.K1372E (KE) variant and p.L375S (LS) variant were unaffected – this variant neutralized the pathogenic effect of the familial SCN1A variant.

Functional studies. Studying two variants within a single family would never allow us to achieve statistical significance – we would never be able to tell whether this finding is related to the family’s clinical presentation or simply due to chance. We therefore assessed the functional consequences of both variants. The KE variant led to a nearly complete loss-of-function (LoF), which is in line with the known disease mechanism of Dravet Syndrome and GEFS+. This was expected. However, when co-expressed with the LS variant, the partial loss-of-function disappeared, the functional changes were rescued, and the pathogenic effect of the KE variant was basically nullified.

Underlying mechanisms. What could be the underlying mechanism for this unusual finding? How could two variants on different alleles of the SCN1A complement each other in this way? In brief, we don’t know. The LS variant by itself does not have any measurable effect; it is not a gain-of-function (GoF) variant that just happens to provide the right amount of GoF to compensate the LoF of the KE variant. So what other mechanisms could be at play? Here is one hypothesis: there is evidence from cardiac channels for some degree of dimerization in SCN5A. If this were the case for SCN1A, the LS variant could potentially facilitate trafficking of the KE variant. This is not an easy hypothesis to test and a future task for the field. For now, we are left with the observation that both variants appear to neutralize each other, resulting in normal electrophysiological parameters and unaffected individuals.

What you need to know. In our publication by Hammer and collaborators we reported on an unusual finding of a large GEFS+ family with two rare variants in SCN1A. A newly discovered variant in this family appears to rescue the electrophysiological abnormalities of the pathogenic SCN1A variant, and the combination of both SCN1A variant is only found in unaffected individuals in this family. This unusual mechanism opens a new chapter in the search for modifier genes, suggesting that some factors contributing to variable expressivity might be within the gene itself.