FHM. Each time I mention CACNA1A and its association with migraine to clinicians and scientists outside the field of pediatric neurology or neurointensive care, I need to take one step back. Yes, CACNA1A is one of the monogenic causes of hemiplegic migraine, but the clinical condition that we are typically concerned with has relatively little to do with common migraines. In contrast, we are talking about a neurodevelopmental disorder often associated with developmental concerns, ataxia, epilepsy and episodes of hemiplegia that may results in brain swelling and can be life-threatening. This condition, typically referred to as familial hemiplegic migraine type 1 (FHM1), neither runs in families nor does it typically result in migraine features. The historical naming conventions complicate awareness of one of the most enigmatic events in neurology, which we refer to as hemiplegic migraine episodes for a lack of a better word. However, I wanted to approach CACNA1A from a different perspective, given the recent publication of a large migraine genetic study in Nature Genetics. 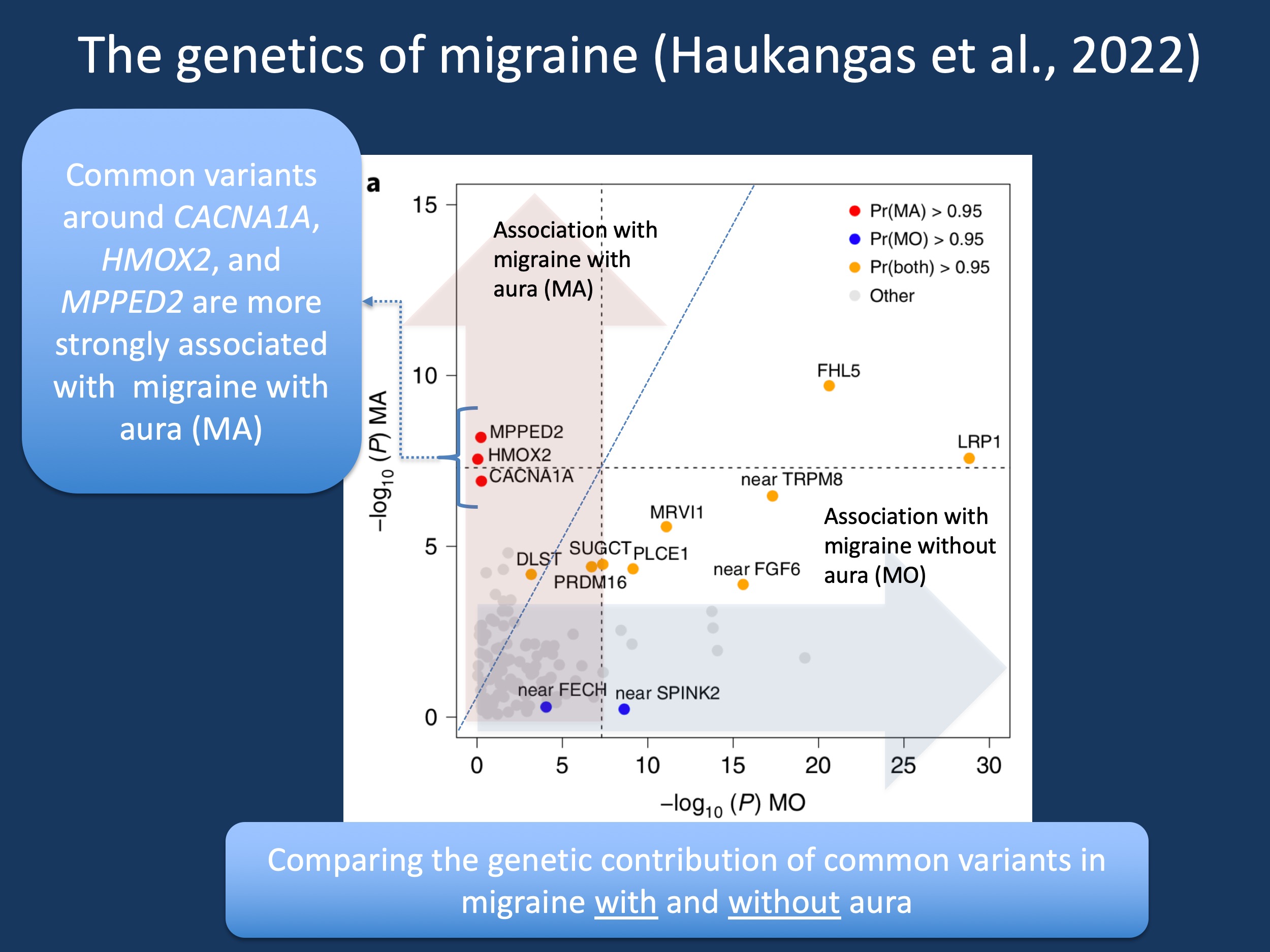 Figure 1. The strength of associations of common variants in migraine with aura (red) compared to migraine without aura (blue). The figure is modified from Figure 3a in Hautakangas et al., 2022 under a Creative Commons Attribution 4.0 International License, which permits use, sharing, adaptation, distribution and reproduction.

Migraine GWAS. The genetics of common migraine is quite different from the genetic etiologies we typically cover in this blog. There is a strong genetic contribution to migraine, and migraine often runs in families. However, in contrast to monogenic causes in the epilepsies such as SCN1A or PRRT2, the genetic contribution in the common migraines largely occurs through common variants. These are genetic changes that are found commonly in the general population, but they are slightly more common in people with migraine. A lot of effort went into migraine genetics over the last decades, and the recent study by Hautakangas and collaborators in Nature Genetics includes an impressive 102,084 individuals with migraine and 771,257 controls.

Migraine subtypes. Migraines are common, with one in five individuals worldwide affected by at least one migraine episode at some point during their lives. However, migraines can present quite differently. Typically, the headache field considers migraine with aura and migraine without auras as two subtypes. Migraine auras typically refer to specific symptoms and sensations that precede the migraine events. These can include flashing lights (phosphenes) or visual disturbances. Hemiplegic migraine, where one side of the body shows weakness with migraine attacks, also falls into this spectrum, but is somewhat different due to the motor symptoms associated with this. Most individuals with hemiplegic migraine do not have other neurological features. When hemiplegic migraine runs in families, sometimes monogenic causes can be identified, including some of the genes that we know well. CACNA1A is the most common genetic cause, but ATP1A2, SCN1A, and PRRT2 can also cause familial hemiplegic migraines.

The genetics of common migraine. In the study by Hautakangas and collaborators, a total of 123 genetic loci with common genetic variants were identified that contribute to migraine risk.  Overall, the genetic findings in this study explain 11% of the overall population risk for migraine, presenting an enormous accomplishment, but also pointing out that there are likely many more genetic associations to be found given the estimated heritability of 40-50% in migraine. The genome-wide association (GWAS) study was powerful enough to identify risk loci for specific drug targets in migraine, such as calcitonin gene-related peptide (CALCA/CALCB) and serotonin 1F receptor (HTR1F). Also, it allowed for a comparison between the genetic contribution to migraine with and without aura. And here, one specific gene caught my eye: CACNA1A.

CACNA1A and migraine with aura. Correct, after trying to emphasize how CACNA1A-related familial hemiplegic migraine is a severe neurodevelopmental disorder and has little to do with the common migraines, CACNA1A tripped me up again. I have adapted Figure 3a from the study by Hautakangas and collaborators as this is the first time that the CACNA1A gene appears in a large study for common migraine, at least to my knowledge. The CACNA1A locus is much more strongly associated with migraine with aura than migraine without aura – common variants in CACNA1A contribute to the common forms of migraine that have auras, which are neurological phenomena. Within the context of the migraines, these findings support the idea that neurovascular mechanisms are the pathophysiological basis of migraine.

Additional thoughts. Finally, could the findings by Hautakangas and collaborators also tell us something novel about monogenic causes in neurodevelopmental disorders? HMOX2 and MPPED2 are two additional genes that may confer separate risk migraine with aura. Amongst these two genes, MPPED2, coding for a metallophosoesterase involved in brain development, has a pLI of 0.99, indicating that loss-of-function variants are not tolerated in the general population, a common feature for genes associated with neurodevelopmental disorders. Two de novo missense variants were identified in the DDD study. Future research will tell whether there is a unique neurodevelopmental disorder associated with MPPED2 and whether clinical features include hemiplegic migraine episodes as seen in CACNA1A-related disorders.

A picture emerging. Overall, the biology behind migraine is slowly revealing itself and the study by Hautakangas and collaborators is a major step in this direction. I have only covered a very small aspect of this study in this blog post given that I wanted to stay focused on CACNA1A. With regards to better understanding of CACNA1A-related disorder, the finding that common variants in CACNA1A are contributors to migraine with auras complements this picture. Yes, my reason for emphasizing the unique features of CACNA1A-related hemiplegic migraine in child neurology remains relevant, but I am referring to differences in clinical presentations, not differences in underlying mechanisms. I hope that the study by Hautakangas and collaborators will provide new applicable insights into concepts such as spreading depression within the context of CACNA1A-related disorders, which have a different spectrum of presentation in the pediatric sphere.