Genetic testing. I smiled into my camera during our virtual Wednesday teaching session — pausing for effect. One of our junior team members has just made the statement that one of our patients qualified for a sponsored genetic testing program. I politely corrected them: “I think what you wanted to say was that this program qualifies for doing genetic testing on our patient”. The focus of epilepsy genetics is changing, shifting away from genetic testing to what genetic tests mean and how we can use them for better treatment. However, getting to a diagnosis requires the ability to perform genetic testing in the first place. And the framework for how this can be accomplished is vastly different within the US and internationally. In this second blog post on our review on epilepsy precision medicine, I would like to revisit the current state of genetic testing in the epilepsies. And yes, genetic testing should be standard of care and affordable for people with epilepsy. It’s that simple. Period. 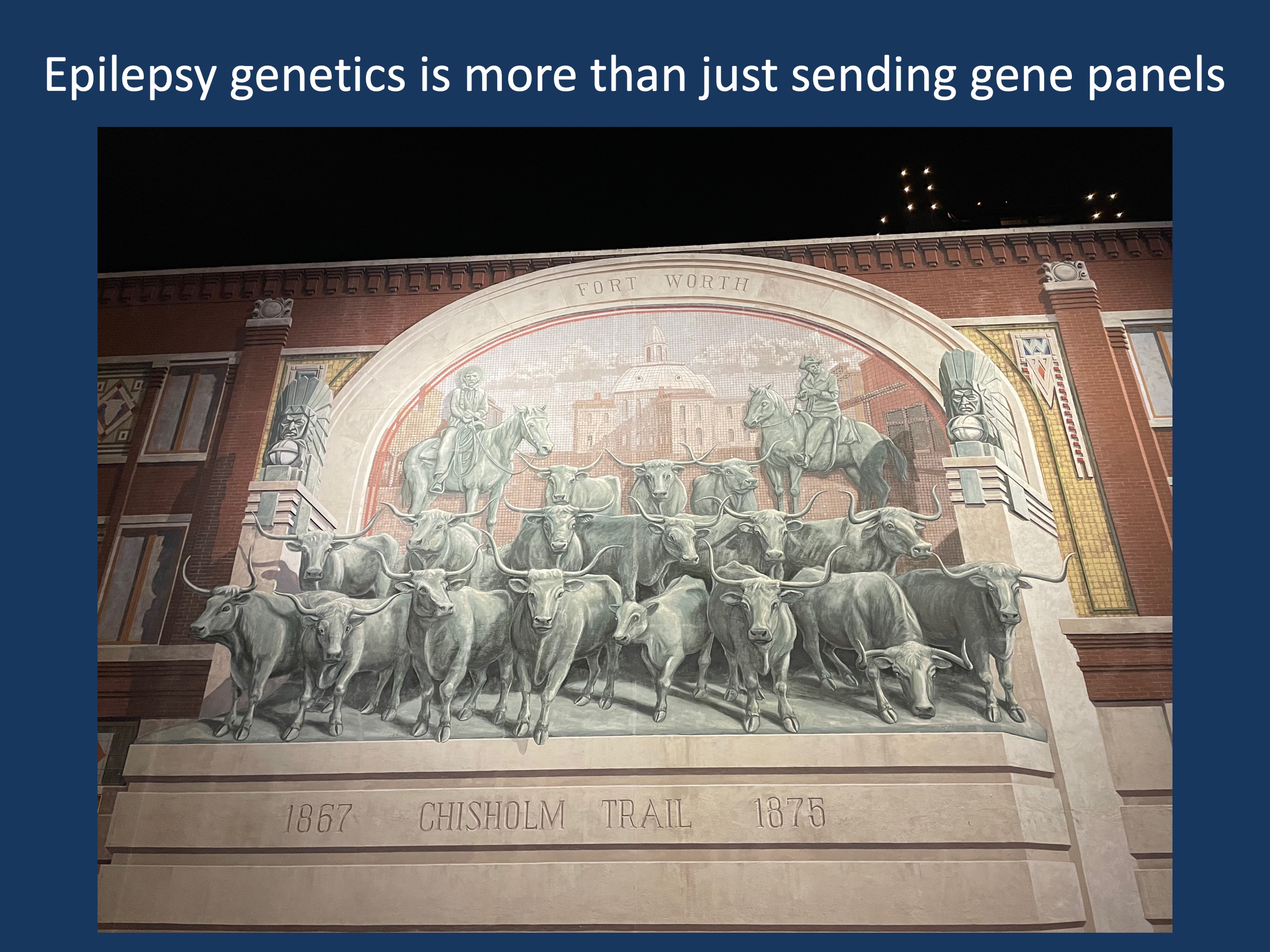 Sundance Square. As my prior post on the 2022 Dravet Syndrome Foundation did not include a photo of Fort Worth, I am adding this to the current blog post. Fort Worth was known as a Cowtown, as the Fort Worth Stockyards was the largest horse and mule market in the world in the past. Now, the focus has shifted, and the economic growth of the Dallas-Fort Worth area no longer depends on cowboys driving cattle along the Chisholm trail. I leave it to the reader to make connections to the change in the field of epilepsy genetics over the last decade.

The pace of gene discovery. When I am presenting my slide on the pace of gene discovery in the epilepsies, I often try to make the joke that I stopped in 2016 because I could fit all the genes onto a single slide and that I am concerned that the timeline would become top heavy and topple over. Yes, this joke has become somewhat stale, as my team frequently likes to point out to me. Nevertheless, what I am trying to convey is the sheer magnitude of gene discoveries in the epilepsies. When I started out in epilepsy genetics, we were in the “dark ages” of epilepsy gene discovery where only few of the suggested genes replicated and the overall outlook was dire. I would not have believed you if you had told me that we would be looking at a virtual explosion of gene discoveries.

Diagnostic yield. Genetic epilepsies are individually rare, but collectively common. It is now more likely to find a genetic diagnosis than not to find a diagnosis in some clinical scenarios such as neonatal epileptic encephalopathies. The overall diagnostic yield for genetic testing in the epilepsies is roughly 24% as identified in the authoritative meta-analysis by Sheidley and collaborators. The main genes in the epilepsies are well established and the focus now shifts to refining the official ACMG criteria for variant classification to make genetic diagnoses more precise and actionable. Likewise, the scope of genetic testing has shifted from introducing improved testing options to reducing the speed and cost of genetic testing.

State of the art. In 2022, a gene panel should not take longer than a few weeks, enabling the results of genetic tests to inform ongoing care shortly after diagnosis. In the near future, this turn-around-time may be even faster. Recent studies have shown that it is technically feasible to perform diagnostic genome sequencing in less than 24h, even though such an approach is not yet cost-effective at scale. In our precision medicine review, we argued that both advocacy and funding is needed to establish genetic testing as a standard of care. This will be supported by emerging data on how genetic testing improves outcomes and impacts key indicators for healthcare systems such as length of hospitalization.

Equal access. The current access to genetic testing is very heterogeneous within the US and across the globe. In our review, we emphasized that genetic counseling and testing is not in reach for a significant number of individuals with epilepsy in the United States, particularly underserved populations, older individuals, and families with public health insurance plans. Genetic testing remains inaccessible for most people outside of North America, Europe and parts of Asia. Therefore, in order to improve the lives of individuals with genetic epilepsies, it is important to improve access to specialty services. Access means more than performing genetic testing, it requires an entire infrastructure for pre- and post-test genetic counseling, and clinical interpretation.

How to improve epilepsy genetics. In our review, we call for increased training for neurologists, training greater numbers of neurogenetic specialists, including clinicians such as genetic counselors. Increasing the number of specialized epilepsy genetic counselors will be a key step, given the invaluable and patient-centered work that can be provided by GCs. Dedicated training programs are an additional step and we are in the lucky position to start the second year of our epilepsy genetics fellowship. However, both genetic counseling effort and fellow training requires resources and is too often taken for granted. While a major focus of precision medicine is the development of better treatments, the future of epilepsy genetics is education. This is worth investing in on all levels including advocacy and professional organizations, healthcare systems, industry, and federal funding agencies.