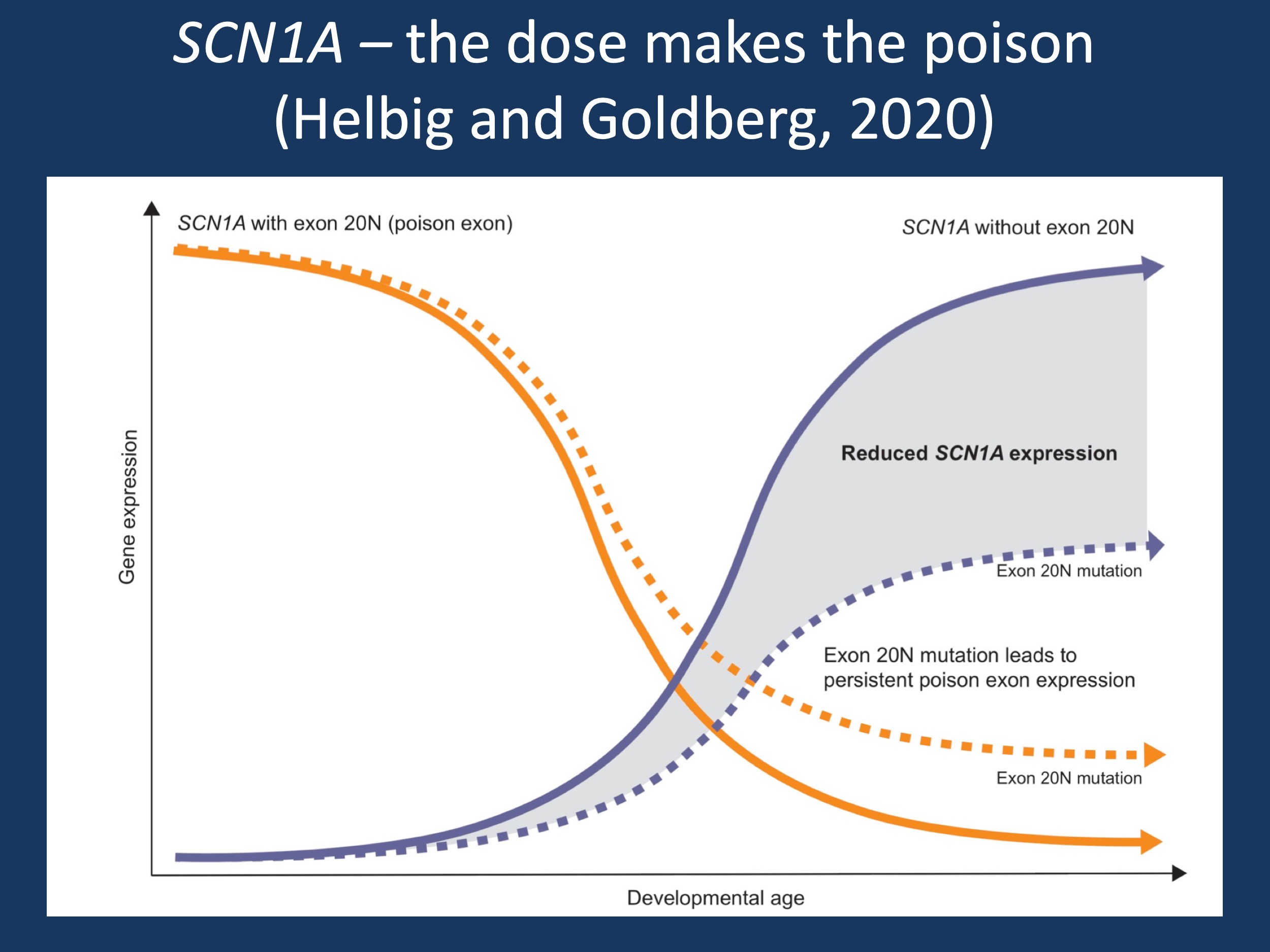 1 – The history of Dravet Syndrome teaches important lessons
SCN1A was identified in 2001 by Claes and collaborators. However, there were quite some speculations about the etiology of Dravet Syndrome prior to this gene discovery and various other classifications for severe childhood epilepsies. For example, some studies suggested that Dravet Syndrome might be polygenic due to a high frequency of family members affected by febrile seizures. We now know that this is not the case and initial reports may have been due to recruitment bias. In addition, there was the observation that Dravet Syndrome typically started after vaccinations, raising the issue about a causal connection. Vaccine encephalopathy was demystified in 2006 by identifying SCN1A variants in a significant subset of individuals previously thought to have vaccine-related epileptic encephalopathies.

2 – Know your g./c./p.
Rules for variant interpretation in SCN1A are increasingly important, and I gave a brief overview of our work behind the scenes in the gene and variant curation group within ClinGen. During my presentation, I challenged both providers and families to “know your g./c./p.”, to be familiar with the specific variant that was identified in individuals with an SCN1A-related epilepsy. The concept “g./c./p.” refers to the exact position of the disease-causing variant. This is important as Dravet Syndrome is both underdiagnosed and overdiagnosed. I presented two situations of individuals with variants initially reported as variants of uncertain significance. In one case, the variant was causative, but the report was not retrievable, in the other case, a child had been mistakenly diagnosed with Dravet Syndrome, even though the SCN1A variant was a benign population variant and the child’s epilepsy was due to a different cause that required a different therapeutic approach.

3 – Think transcripts, not genes
Until a few years ago, I had assumed that there is nothing relevant with respect to SCN1A gene regulation that can be approached therapeutically. In my mind, SCN1A was under the regulation of a complex landscape of transcription factors that was impossible to disentangle. There was one gene, one transcript, one protein. Cognitive psychologists refer to such simplifications as “heuristics”, mental short-cuts that make our decision-making easier. However, reality is more complex and by thinking of SCN1A as just a gene, we lose track of potential therapeutic targets. In reality, there are many different SCN1A transcripts, including transcripts that include poison exons that reduce SCN1A expression. These non-productive transcripts are now major targets for antisense oligonucleotide therapies. Take home message:  genes themselves are not important, but what genes do is.

4 – Be aware of Dravet mimickers
How many other genes are there for Dravet Syndrome? Several genetic etiologies including PCDH19, CHD2, KCNA2, HCN1, and GABRG2 may result in clinical presentation that may have some overlap with Dravet Syndrome at some point during the disease course. However, in many situations, the clinical presentations and treatments are different. What is the most common gene for SCN1A-negative Dravet Syndrome? It is an SCN1A variant that was initially missed during the diagnostic work-up, as shown in our 2016 publication. The connection between the clinical presentation of Dravet Syndrome and SCN1A is so strong that it is more likely to find an SCN1A variant than any other causative gene, if the initial testing is negative. This is particularly relevant for genetic testing that had been performed several years ago when methodologies were not as established as they are today.