Looking back. The beginnings of the COVID-19 pandemic seem so long ago. Looking back at the early days of the pandemic from May 2022 may not seem to provide much information. Now that we are more than two years into the pandemic, our understanding, management, and treatment of COVID-19 has significantly evolved. So why would it be important to look back at what happened in the very early stages, especially when we consider pediatric neurological disorders? In brief, examining the early stages of the pandemic can provide insights into the robustness of child neurology care amid a crisis. In a recent publication, we did just this. Using data from more than 27,000 patients in seven pediatric tertiary care centers, we looked back at what happened to hospital-based child neurology care in the first six weeks of the Shelter-in-Place orders aka the “shutdown”. The results were disturbing. Even for child neurology emergencies, we found more than a 50% reduction of hospital admissions. In this blog post, we would like to review how the initial shutdown shook the foundations of child neurology. 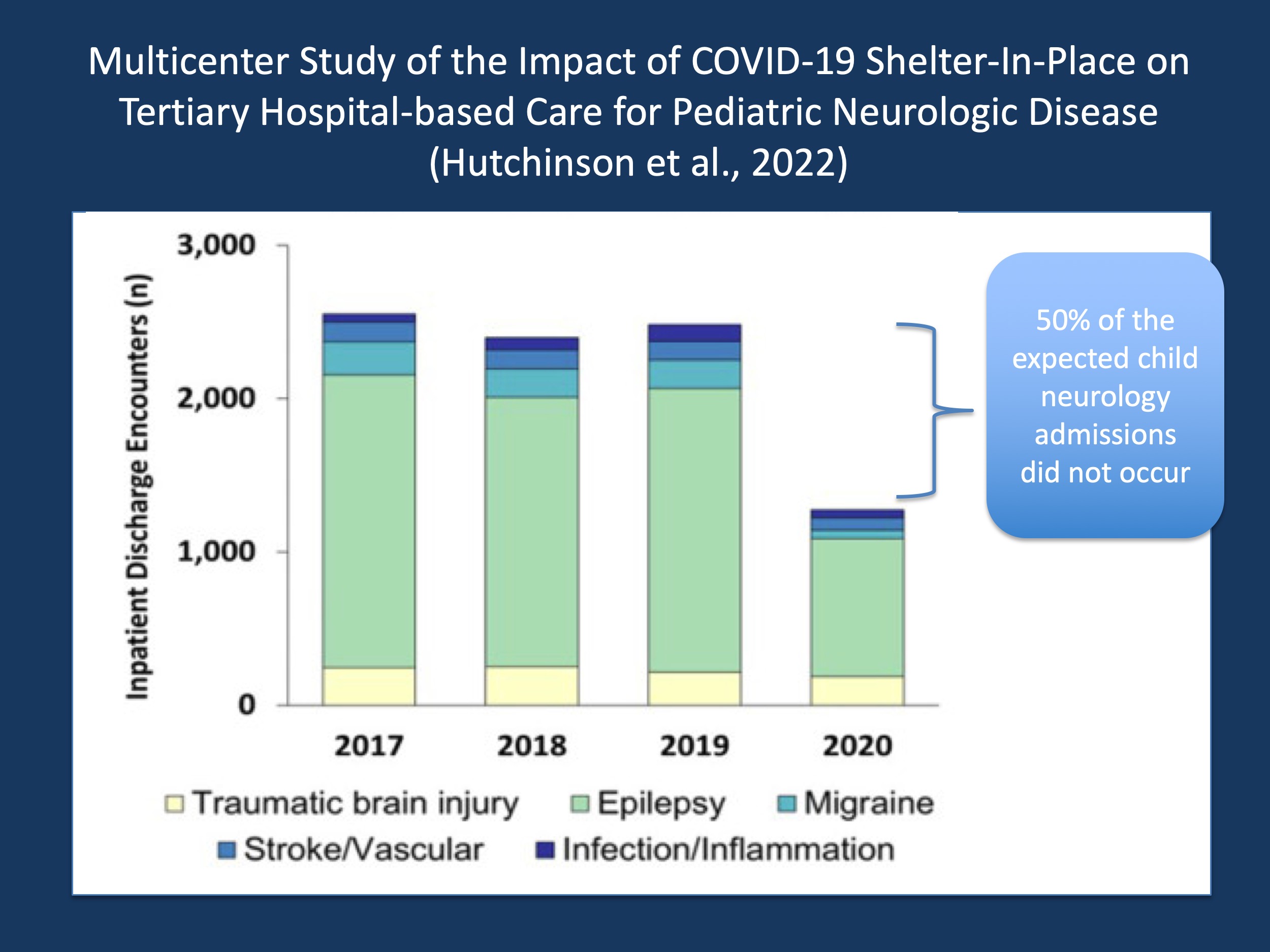 Figure 1. Comparison of inpatient discharge encounters over four years across seven US and Canadian pediatric tertiary care centers, spanning comparable time intervals to the six-week Shelter-in-Place period during the initial stages of the COVID-19 pandemic. Approximately 50% of the expected encounters did not occur, spanning across a wide range of pediatric neurological disorders, including status epilepticus, infantile spasms, and migraine (adapted from Hutchinson et al., 2022).

Shelter-in-Place. In the recent publication by Hutchinson and collaborators, we contributed to a large multicenter study that assessed admission patterns for childhood neurological disorders in large US or Canadian tertiary care centers, comparing the initial six weeks of the shutdown to comparable time intervals in the prior years. We analyzed a total of 27,900 encounters across four years and compared the incidence of encounters across the different years. While many fields of medicine have seen reduced urgent care admission during the initial shutdown, the reduction in encounters in child neurology were particularly worrisome and more pronounced than in most other disciplines. For example, admissions for migraine fell by 70%, and encounters for acute diagnoses of status epilepticus, infantile spasms, and traumatic brain injury fell by 50%. Let us review the potential reasons for this reduction in patient encounter for three conditions, including status epilepticus, infantile spasms, and pediatric migraine.

Status epilepticus. Other than assuming that the initial shutdown led to a potential reduction of provoking infections, there is no credible explanation as to why more than 100 children with status epilepticus were not admitted. For all prior years, more than 250 children were admitted during a comparable time period, while only 120 children were admitted with status epilepticus during the initial Shelter-in-Place orders (COVID-SiP). To put this into context, this sharp reduction is roughly in line with what has been seen for admission for ischemic stroke or myocardial infarction (link). However, this comparison should not distract from the fact that there is an apparent gap: the incidence of pediatric status epilepticus likely did not change significantly, so where did these patients go? It is beyond the scope of the study by Hutchinson and collaborators to provide an answer for this. However, it is likely that these children received other types of care or, in the worst case, no treatment at all. Given the urgency and high degree of medical attention given to status epilepticus, this is a very discomforting thought. Even though the need for urgent care for status epilepticus appears self-evident in most cases, the framework to correctly identify status epilepticus and initiate urgent treatment appears more fragile than most of us would have imagined.

Infantile Spasms. Again, for Infantile Spasms, the incidence during the six weeks of COVID-SiP shrank by more than 50%. Instead of approximately 70 infants, only 32 infants were admitted and treated for infantile spasms. It is worth noting that the potential story behind this reduced incidence is conceptually different from status epilepticus. Infantile spasms do not have a known trigger, so the potential exposure to respiratory viruses in general does not hold as an explanation. However, in contrast to status epilepticus, infantile spasms could have been missed and not diagnosed as such during the initial fog of the shutdown. Given that delayed treatment of infantile spasms may results in adverse outcomes, this consideration is also very concerning: Shelter-in-Place orders may have temporarily erased much of the progress made over the last 30 years in recognizing infantile spasms early.

Migraine. The incidence of encounters for migraine was reduced by more than 70%. In contrast to status epilepticus, migraine does not represent a life-threatening emergency and in contrast to infantile spasms, there are typically no neurological or neurodevelopmental sequalae that require urgent diagnosis. However, migraine is a strong contributor to reduced health-related quality of life and significantly impacts school attendance and social function. Admissions for pediatric migraine typically present a necessary step during many treatment protocols when pain control cannot be achieved through outpatient measures. As with status epilepticus and infantile spasms, there is no immediate reason to believe that this reduction represents changes in the frequency of migraine. In contrast, the reduction of migraine-related admission by 70% suggests that seven out of ten children with migraine may not have received the necessary care that they would have obtained otherwise. For a highly prevalent and burdensome chronic recurrent disease, this is concerning.

Child neurology care during COVID-SiP. In summary, the study by Hutchinson and collaborators suggests that the initial shutdown was a shock to the system of the established framework of child neurology care. Even more, among the most urgent child neurological emergencies, the incidence of admissions was reduced by 50% or more. This may indicate that our current paradigm of urgent child neurology care is less robust than we would have thought: a shutdown such as that witnessed during the COVID-SiP is disruptive enough that more than 50% of the expected patients became lost within the healthcare system. Knowing the fragility of the system, the study by Hutchinson and collaborators may serve as a warning for future healthcare emergencies.