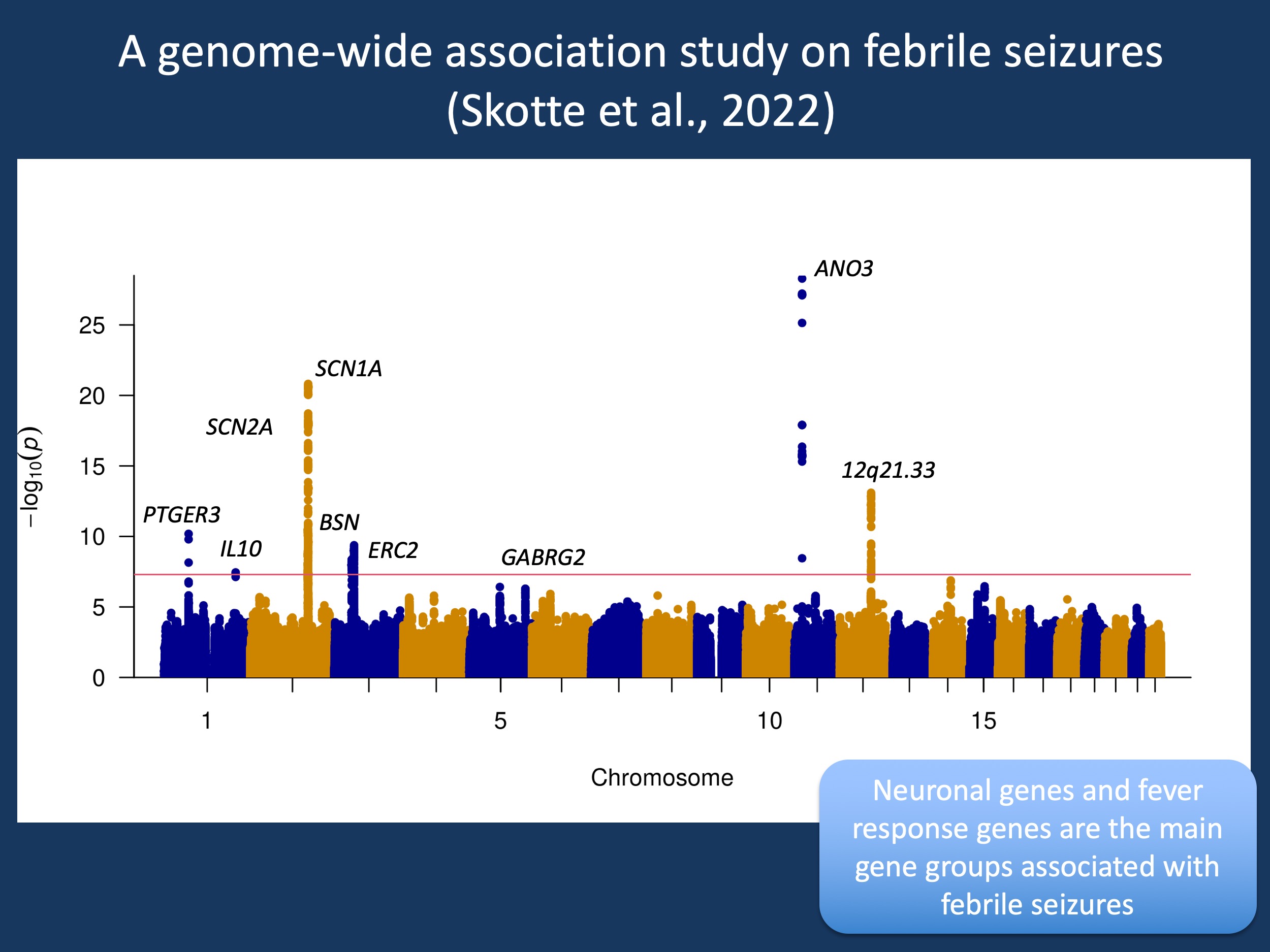 Figure 1. An analysis of >7,000 cases and >80,000 controls identified various genome-wide associations in febrile seizures, accounting for ~10% of the overall heritability. Genes suggested through this genome-wide approach include known genes associated with fever-associated epilepsies such as SCN1A and GABRG2, novel neuronal genes such as BSN (bassoon), and genes associated with fever response such as PTGER3, encoding a prostaglandin receptor involved in the regulation of fever response, and IL10, an anti-inflammatory cytokine (Figure provided by author).

Febrile Seizures GWAS. In the recent publication by Skotte and collaborators in Brain, the authors assess common variants in >7,000 cases and >80,000 controls, the largest study performed on Febrile Seizures so far, analyzing this cohort for associations with common genetic variants. The authors identify several common variants associated with Febrile Seizures, expanding their prior work in the field and combining various cohorts. Genome-wide association studies are the method of choice to identify common variants associated with disease, variants that are frequent in the general population, but show significant differences in frequency in individuals with a specific condition. The results of the studies are quite fascinating, somewhat settling the long-standing debate whether some children are prone to seizures because of a tendency to have a faster rise of temperature when sick or because they have a genetic susceptibility to seizures.

Fever genes + seizures genes. The answer is “both”. The study by Skotte and collaborators identified common variants in voltage-gated ion channel genes such as SCN1A and SCN2A, as well as common variants close to other neuronal gene such as GABRG2 and bassoon (BSN), a presynaptic protein of the GABAergic presynapse. Most of these genes are also implicated in monogenic epilepsies, highlighting the relatedness in mechanisms. Yes, Febrile Seizures are distinct from SCN1A-related epilepsies. However, common variants in these genes still contribute to the genetic liability to Febrile Seizures. In addition, the study by Skotte and collaborators identified common variants close to genes involved in the fever response, including PTGER3, encoding a prostaglandin receptor involved in the regulation of fever response, and IL10, an anti-inflammatory cytokine. These findings are entirely new and surprising – Febrile Seizures truly have a dual genetic contribution, including common variants in epilepsy-related genes and genes coding for proteins involved in the fever response.

ANO3. Before getting carried away by the rivalry of fever versus seizure genes in the etiology of Febrile Seizures, there is one wrinkle in the story. The most strongly associated locus occurs close to a gene with no known relationship to human epilepsies, the ANO3 gene that was also highlighted in the author’s prior GWAS study. ANO3 encodes anoctamin-3, a calcium-activated chloride channel expressed in the brain linked to a rare form of dystonia (DYT24). How this gene is related to febrile seizures remains a mystery, but recent studies suggest that anoctamin-3 is involved in the thermoregulation in the hypothalamus (link), potentially adding a third mechanism contributing to Febrile Seizures.

What you need to know. As of 2022 and a recent large association study, Febrile Seizures are amongst the most well-studied seizures syndromes. The study by Skotte and collaborators provides a unique example on how basic disease mechanisms can be identified through genome-wide association studies. The GWAS results suggest that at least two different mechanisms contribute to febrile seizures, the genetic liability to seizures and changes in the fever response. The results of this study are truly fascinating and open up a new chapter in the genetics of Febrile Seizures.