Pandemic. This year’s Annual Meeting of the American Epilepsy Society (AES) was the 75th meeting, but it was a meeting like no other. #AES2021 was the first in-person meeting for the international epilepsy community with many international participants unable to join due to local restrictions and the US-based audience split between participating in-person and joining remotely. However, despite the unusual format, this year’s meeting was bustling and full of excellent science. Here are my five takeaways from AES 2021. 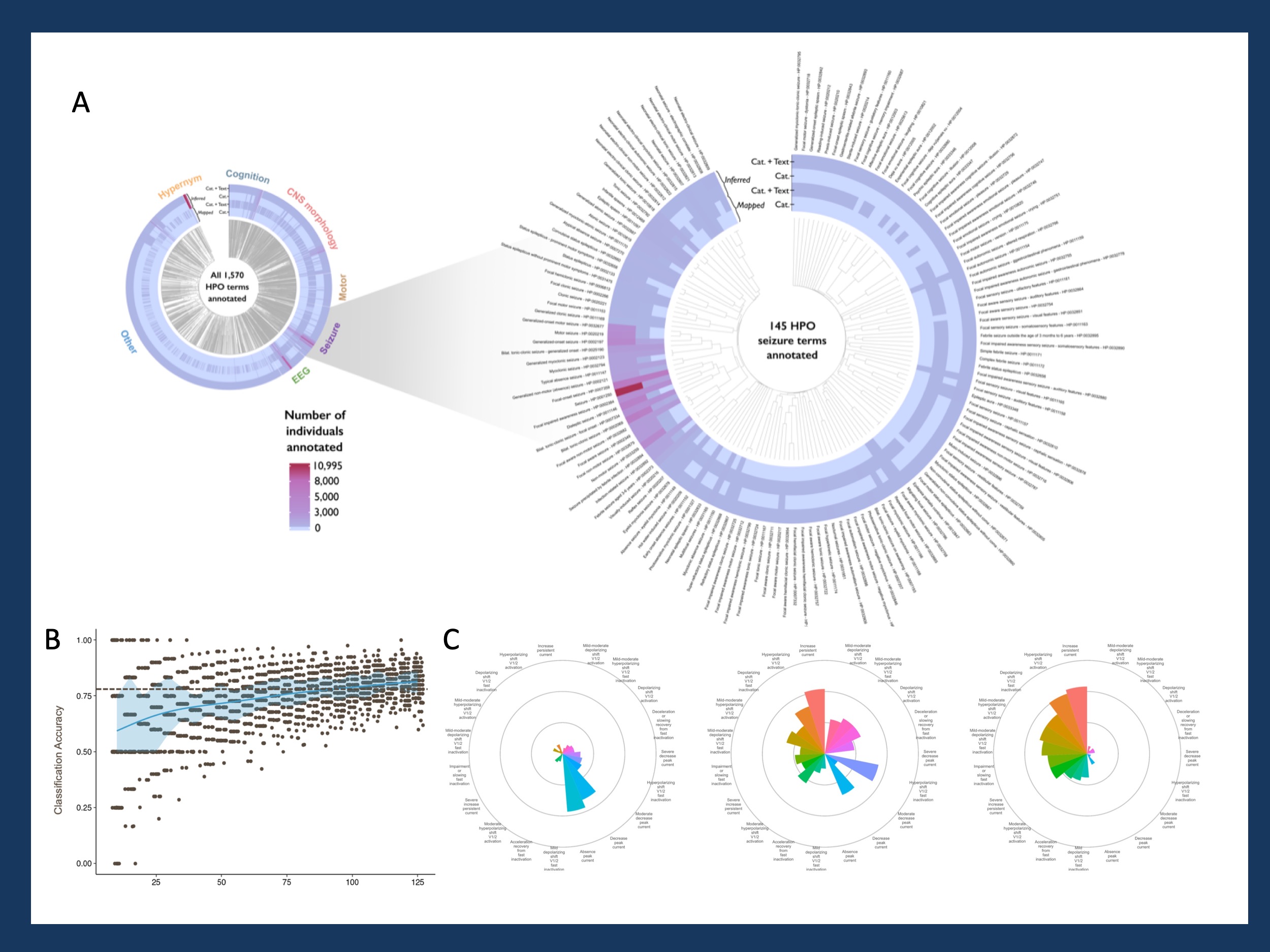 Figure 1. A potpourri of some of main figures from the posters of our lab (helbiglab.io) that we tweeted out during the meeting. (A) The Epi25 dataset has now been successfully mapped to Human Phenotype Ontology (HPO) terms in more than 11,000 individuals with existing exome data. (B) A snapshot from our work on neonatal seizure prediction using EEG reports generated from routine care, allowing for >90% accuracy. (C). A visualization of different functional variant classes, mapping their biophysical abnormalities using the novel FENICS ontology.

1 – A meeting of the third kind
There is no sugar-coating it. AES 2021 was a meeting that took place despite the ongoing pandemic in the shadow of the rising Omicron variant. We participated in-person and returned home with a feeling of “That was OK, I think?”, having a pit in our stomachs as to whether we did the right thing. AES 2021 meant a congregation of vaccinated participants, wearing masks, and avoiding large receptions. At times, it felt like ships passing in the night and personally I did not catch up with many people I wanted to. Everything was thinned out and the sound that I’ll remember from AES 2021 is the squeaking of the escalators echoing through the empty conference halls. It might be worthwhile considering a new term for this kind of meeting rather than referring to this as an in-person meeting, it was a meeting of the third kind. Nevertheless, getting together with the epilepsy community was invaluable and I am thankful to AES for making this possible.

2 – Artificial Intelligence (AI) knocked on the door, but didn’t quite come in yet
The big promise of artificial intelligence was present throughout the meeting. The technical innovations spurred by the pandemic meant that talk around Artificial Intelligence and Machine Learning was prominent throughout the meeting, most prominently during the Presidential Symposium when Brian Litt envisioned what an epilepsy visit might look like in 2035.

Despite all the promise, however, there is little tangible result in 2021. It feels like we’re slowly getting there and the future will belong to the algorithms in healthcare. In the same lecture Ethan Goldberg presented some of our own data showing that the ML algorithms we developed may help identify genetic epilepsies such as Dravet Syndrome as early as three months of age. However, this is preliminary, has many caveats, and as a field, we’re collectively not there yet.

On my way home from AES, I read a blog post by the CDC that summarized the somewhat disappointing track record of Machine Learning in Health Care in 2021. This brief summary is worth reading. In fact, the most promising AI tool at AES 2021 was the facial recognition software in the CLEAR Health Pass mobile app that verified everybody’s vaccination status.

3 – GWAS, CNV, and wait a second, was this a burden analysis?
When Julie showed me the first draft of her poster on STXBP1 that won a Grass Foundation Young Investigator Award, I couldn’t help but smile. Apart from some of the novel visualizations we included, it read like a typical clinical poster. Likewise, in the Genetics platform, David’s talk on the rare variants in the Epi25 study appeared to seamlessly align with the results of the large-scale ILAE 3 study and the most recent epilepsy CNV analysis in tens of thousands of individuals with epilepsy. It was the most recent burden analysis, right?

Far from true on both accounts. Julie’s work was based on a computational phenotyping framework that processed the largest, single-gene dataset of Human Phenotype Ontology (HPO) terms accumulated and analyzed to date, merged with novel approaches to include Electronic Medical Record (EMR) data. Likewise, David’s poster and presentation used the results of a large-scale phenotype harmonization using HPO to demonstrate the clinical signature of epilepsy-related genes. Both posters and platform presentations were targeted at the clinical AES audience, showing the clinical impact of the results, but not vast computational engine under the hood.

Two years ago, we carefully made the prediction that clinical data harmonization and computational phenotyping will become mainstream when we don’t need to talk about it anymore and can simply show the results. That’s what we tried to do this year, coupled with new concepts for intuitively visualizing these complex datasets for our clinical audience.

4 – Reaching the Epilepsy Healthcare Singularity
Polymath John von Neumann was the first person to come up with the concept of the Singularity, a hypothetical point in time at which technological growth becomes irreversible. I would use this concept to think about epilepsy care in the same way: At what point does the growth of clinical data coupled with technological innovations speak for itself? Our lab had two posters during this year’s AES that received relatively little attention to the advances in epilepsy genetics, but demonstrated that the “Epilepsy Healthcare Singularity” is within reach. Just imagine the following scenario: we know nothing about which anti-seizure medication works for which type of epilepsy. All we have is the data of thousands of patients with their seizure outcomes measured during routine care at different points in time, as well as medication prescriptions in the Electronic Medical Records.

We would probably all agree that this data will likely give us some insight into which medications work. However, generating such a system requires both systematic documentation in a sufficient number of individuals and the technical capabilities and conceptual frameworks of putting this all together. Well, we did the first step. Shridhar and Michael presented our poster on the analysis of our Epilepsy Health Form that uses the formats suggested by the Epilepsy Learning Health System and Pediatric Epilepsy Learning Health System that we initially introduced earlier this year. Valproic acid is 2x better for reducing the frequency of generalized seizures than any other antiseizure medications (ASM), oxcarbazepine is roughly 3x better than other ASM for the reduction of focal seizures. Yes, you already knew this, but this is not a textbook speaking to you, but the data itself! Data on of hundreds of patients from ongoing, routine care without any human interpretation. This is not ready yet for clinical use, but we have managed to make the Electronic Medical Records speak to us.

5 – What’s with all the @’s and #’s? Rediscovering Twitter for epilepsy genetics at #AES2021
I have to admit that my Twitter account has pretty much been shamefully dormant for over a decade and was largely used as a passive vehicle to announce new blog posts. I started rediscovering Twitter as a tool for scientific communication a few weeks ago. Back in 2013, I was part of SpotOn, a conference on social media in science. One of my main take-aways from this meeting was that a social media presence in the scientific field can only be sustainable if it is personal. There is no “must” or “should”, but only familiarity and personal preference. That’s why this blog, with all pauses and interruptions, still exists after more than a decade.

I gave Twitter, now a much more mature and established tool, a try and found it useful to stay up to date with science. At @IngoHelbig, you will find somewhat of a running commentary on neurogenetics and data science, intermixed with some personal tweets. Furthermore, the good old @channelopathist handle is currently refurbished to become the Twitter account of helbiglab.io. Not that I am a particularly adept at using Twitter, but it feels like the experience of #AES2021 with half of the epilepsy genetics community participating virtually has rekindled some of my interest in peer-to-peer science communication.