STX. Neurodevelopmental disorders due to disease-causing variants in STXBP1 are amongst the most common genetic epilepsies with an estimated incidence of 1:30,000. However, despite representing a well-known cause of developmental and epileptic encephalopathies in the first year of life, relatively little has been known about the overall genetic landscape and no genotype-phenotype correlations have been established. In our recent publication including almost 20,000 phenotypic annotations in 534 individuals with STXBP1-related disorders, we dive deep into the clinical spectrum, examine longitudinal phenotypes, and make first attempts at assessing medication efficacy based on objective information deposited in the Electronic Medical Records (EMR), including information from the almost 100 “STXers” seen at our center in the last four years. 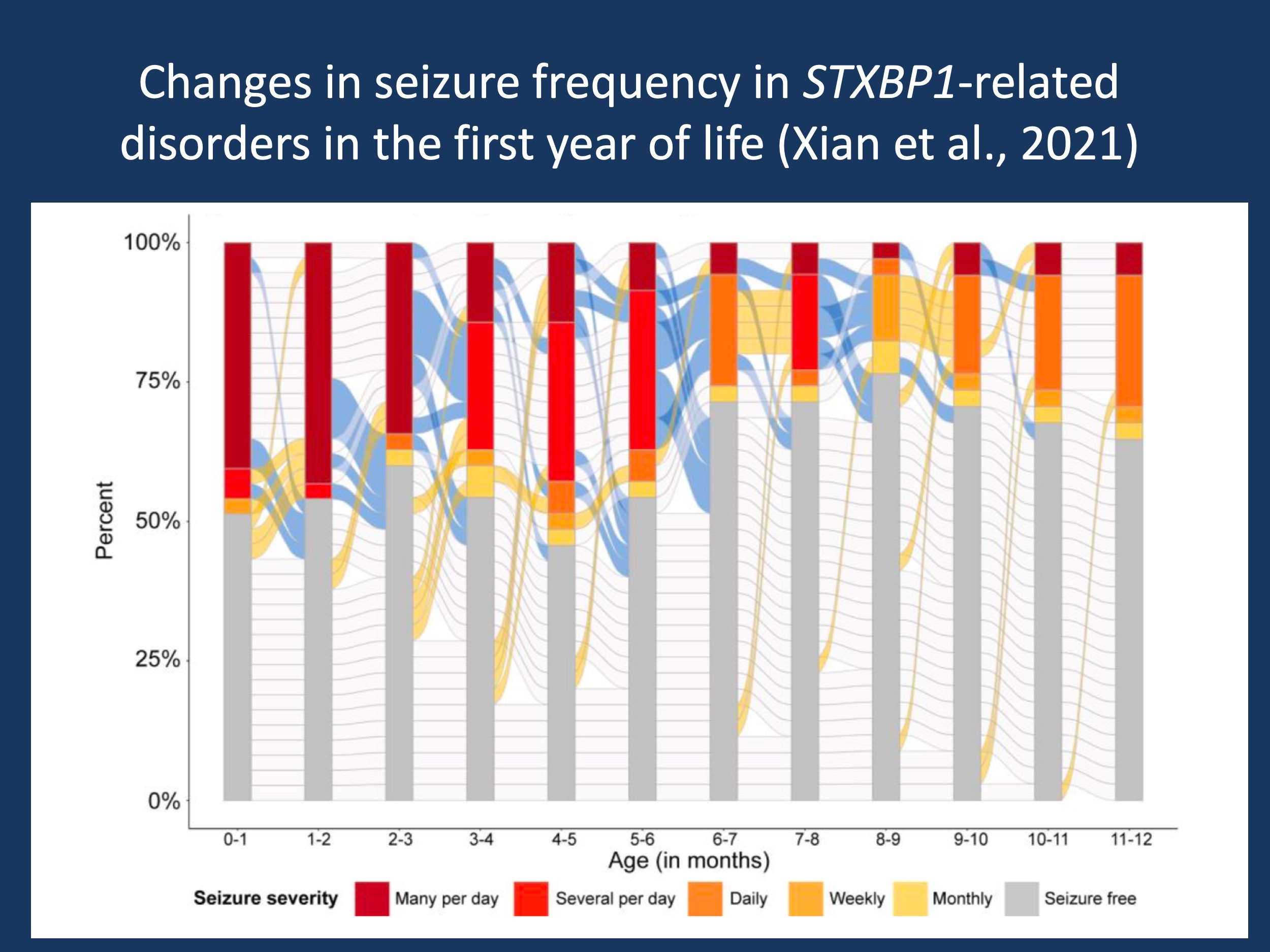 Figure 1. Changes in seizure frequency in monthly intervals during the first year of life visualized through an alluvial plot, indicating a dynamic course of seizures in individuals with STXBP1-related disorders. Progression in blue between monthly increments indicates seizure improvement, whereas yellow indicates seizures worsening and grey indicates no change in seizure frequency (from Xian et al., 2021)

The STX story. I am writing a blog post that I would not have expected to write even five years ago, a blog post about our clinical experience in a single genetic epilepsy that I barely knew about only eight years ago – the STXBP1-related disorders or “STXBP1 encephalopathy” as it used to be called back then. Initially found in individuals with Ohtahara Syndrome by Saitsu and collaborators in 2008, STXBP1-related disorders were initially very rare genetic epilepsies that were exclusively expected to occur in the early infantile period. However, the clinical spectrum was soon found to be much wider than initially expected, including other developmental and epileptic encephalopathies starting in the first year of life, and even neurodevelopmental disorders without epilepsies. In Stamberger and collaborators, the most frequently cited clinical publication on STXBP1-related disorders, we stated that there was little correlation between seizure onset, seizure severity, and the degree of intellectual disability in STXBP1-related disorders, already anticipating some of the clinical complexity in this neurodevelopmental disorder.

STXBP1 in 2021. Our publication by Xian et al. in Brain is the result of more than five years of work on trying to conceptualize the STXBP1-related disorders clinically. To state the obvious, it has not been easy given the vast range of clinical features and different trajectories seen in our “STXers”. In parallel, we became a major referral center for STXBP1-related disorders and our clinical team, including our genetic counselors, physical therapists, and occupational therapists has almost seen a triple digit number of individuals with STXBP1-related disorders – giving us deep clinical insight into this condition and making STXBP1 the most frequent disease gene in our epilepsy genetics program. Our clinical experience has proven to be very relevant as the STXBP1 gene tends to deceive – it is easy to get a misleading impression of this condition from a small number of individuals. This phenomenon has led to some of the disparate descriptions in the literature. However, the more individuals we saw, the more we were able to get a broader perspective. STXBP1 phenotypes are highly variable, but there are emerging patterns. Here are five take-aways from our recent study.

1 – Complex phenotypes require new approaches
In our study, we first tried to systematically assess the clinical information on all individuals ever reported in the literature, combined with clinical information from our center and collaborators. But, we needed a framework that allowed for capturing clinical information that is inherently complex and at different levels of detail. Thus, we expanded on our prior work on the Human Phenotype Ontology (HPO), a controlled dictionary of >13,000 phenotypic terms with defined relationships between them. This is the same framework that we previously used to jointly analyze Epi4k and EuroEPINOMICS data and SCN2A-related disorders. Also, we had already developed methods to compare individuals’ features across patient cohorts. This experience came in handy – we ended up analyzing almost 20,000 phenotypic annotations in 534 individuals, the largest single-gene cohort with harmonized clinical data ever analyzed. In summary, we analyzed clinical features in individuals with STXBP1-related disorders through a novel framework that allowed us to make every phenotypic annotation count.

2 – A genotype-phenotype correlation emerges for different variant classes
Admittedly, STXBP1 didn’t make it easy for us, but there is genotype-phenotype correlation in STXBP1. However, the observed genotype-phenotype correlation occurs on the backdrop of an overall high level of phenotypic variability. The strong associations with recurrent variant such as the SCN2A p.R853Q variant are not seen in STXBP1. However, our study was sufficiently powered to detect hints of phenotypic patterns that may become more prominent once more individuals are seen and once we are able to examine more detailed phenotypes. For example, individuals with protein-truncation variants (e.g. stop mutations, splice site variants, frameshift variants, deletions) have a 2.5x increased risk of seizures, neonatal onset, infantile spasms, and ataxia. Individual with recurrent variant at position 406 (p. p.Arg406Cys/His) have a 3x increased risk for spastic tetraplegia, burst-suppression EEG findings, and regression. In contrast, individuals with recurrent variants at position 292 have an almost 3x risk for focal seizures and refractory epilepsy, while variants at position 551 confer a 3x risk for generalized tonic-clonic seizures (GTCS) and movement disorders. In summary, the almost 20K phenotypic annotations allowed us to capture a first glimpse of genotype-phenotype correlations in STXBP1-related disorders. This information will be critical for prognosis, treatment, and design of clinical trials.

3 – Seizure frequency in the first year of life is highly dynamic
For large studies on neurogenetic disorders, assessing phenotypes across time is typically difficult, if not impossible. We took advantage of recently emerging frameworks to document phenotypes over time. We used the standard nomenclature for seizure frequency of the Epilepsy Learning Health System (ELHS) and Pediatric Epilepsy Learning Health System (PEHLS) that we refer to as the ELHS/PELHS format. We had previously applied this format in the larger epilepsy cohort at our center. We reconstructed phenotypes in 4,433 monthly intervals in 62 individuals, documenting seizure types and seizure frequency in each monthly increment. Yes, this work was as time-consuming as it sounds, but it allowed us to apply our computational approaches that we developed for Electronic Medical Records to this reconstructed dataset. Given that we combined HPO terminology, ELHS/PELHS format and our frameworks for longitudinal phenotype analysis using time bins, we were able to create a general format that captures the major aspects of the epilepsy trajectory.  Examining such datasets through computational methods gave us some unexpected insights, such as the dynamic development of seizure frequencies in the first year of life (Figure 1). In brief, all individuals shown in this Figure had seizures at some point in infancy, but the changes in seizure frequency are so dynamic that there is not a single monthly interval when more than 60% of individuals have seizures. Also, more than 90% of individuals with STXBP1-related disorders and epilepsy had seizure onset in the first months of life.

5 – STXBP1 leading the way
Even though our lab had worked on various aspects of computational phenotype analysis over the years, the study by Xian and collaborators was our first project where we combined all aspects of our previous work to provide the maximum amount of information at various levels of detail, including (1) a broad overview of phenotypic features across a large patient cohort, (2) an assessment of longitudinal features for individuals where detailed phenotypic information was available, and (3) an even deeper view at a further subset where medication prescriptions could be retrieved from the EMR. This layered approach can be applied to basically any genetic epilepsy and other conditions, such as genetic epilepsies due to disease-causing variants in SCN1A, SCN2A, SCN8A, SLC6A1, DNM1, and SYNGAP1 are already in the pipeline to be analyzed through a similar framework.

What you need to know. In our study by Xian and collaborators, we aimed to demystify STXBP1-related disorders. An in-depth analysis across a large amount of clinical data was possible through a novel computational framework that analyzed digitized phenotypes. Using information in this format from the largest cohort of individuals with STXBP1-related disorders assessed to date, we find emerging genotype-phenotype relationships. For example, individuals with protein-truncating variants and deletions in STXBP1 were twice as likely to present with West Syndrome and were more phenotypically similar than expected by chance. We demonstrate a dynamic pattern of seizure control and complex interplay with response to specific medications, particularly in the first year of life.