GWAS. While our blog mainly deals with monogenic epilepsies, assessing common genetic risk factors through genome-wide association studies has been an established way of understanding potential genetic contributors to both common and rare disorders. More recently, polygenic risk scores have entered the stage, composite measures of many common variants which explain a significant proportion of the overall population risk for epilepsy. However, a major limitation of many genome-wide association studies has been the focus on populations of European ancestry. So far, very few studies have examined common genetic risk factors in the epilepsies in non-European populations. In a recent publication examining results from the BioBank Japan Project, 42 disorders were examined in more than 200,000 individuals, including the epilepsies. While no single epilepsy variant stood out, the study provides an interesting confirmation of a previously known common risk factors for the epilepsies. 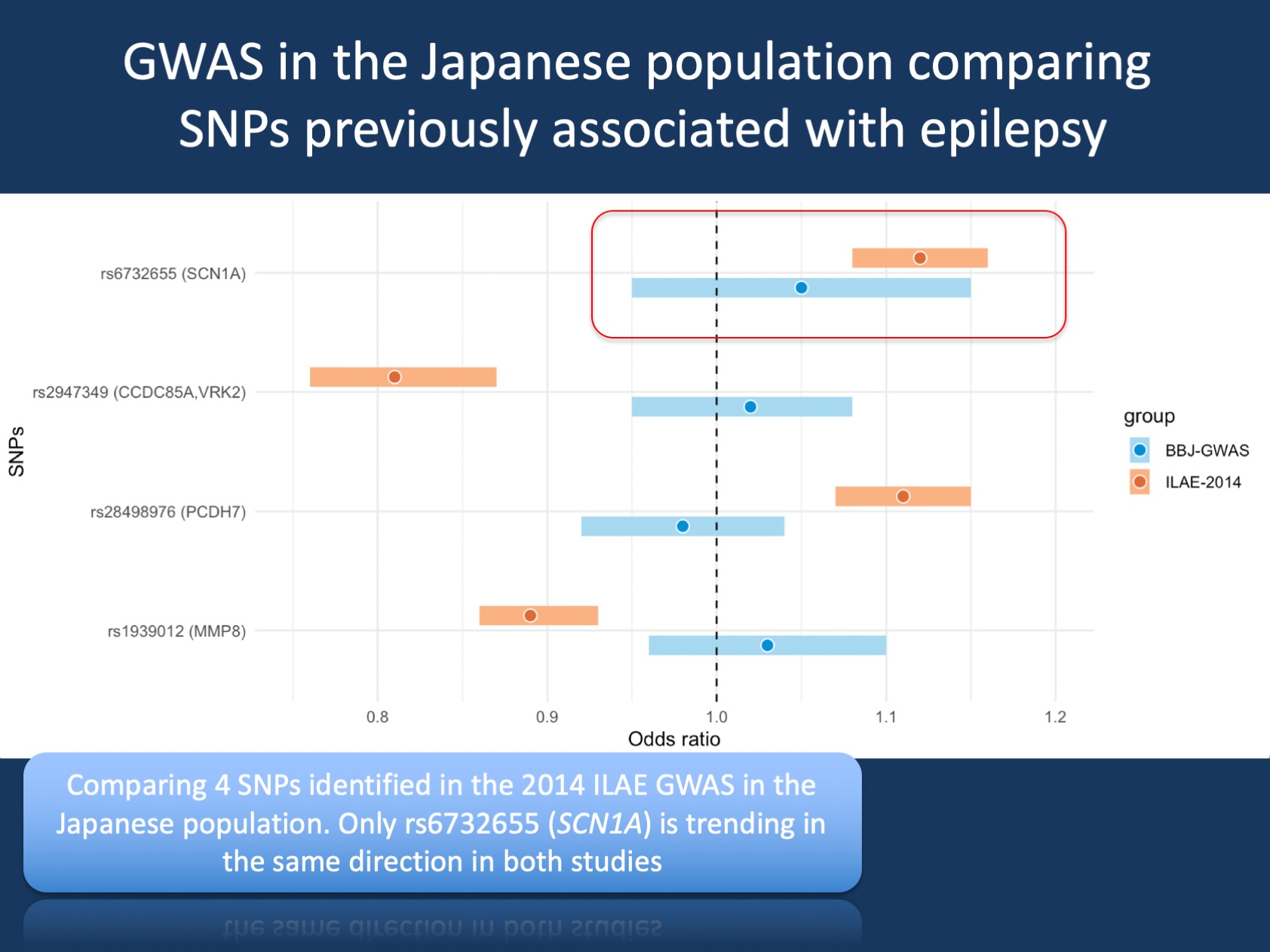 Figure 1. The study by Ishigaki and collaborators examined common genetic risk factors for 42 common diseases in more than 200,000 individuals from the BioBank Japan Project. The authors compared common variants predisposing individuals to epilepsies in their study to variants in the 2014 ILAE GWAS study. Only the rs6732655, in the vicinity of SCN1A, had an effect size that overlapped with what was previously seen in our prior study.

Genome-wide association studies. In the late aughts, genome-wide association studies emerged as a novel way to understand genetic risk factors. While genetics has previously been thought of as rare variants resulting in strong effects (as in the case of monogenic diseases), genome-wide association studies highlighted a completely different part of the genomic architecture of common disorders – the fact that we all carry common risk factors for many disorders and that most conditions with a strong genetic contribution are not caused by single-gene disorders alone, but through a combination of many common variants. For example, for Childhood Absence Epilepsy (CAE), it is well known that on a population level, more than 90% of the liability is explained by genetic factors. However, only very few (<5%) of individuals with CAE have clearly monogenic causes – the majority of the risk for CAE is likely due to the combination of hundreds, if not thousands of common variants that are slightly more frequent in individuals with epilepsy than in the general population.

GWAS hits. One way to look for these common variants is to find specific genetic variants that are more common in individuals with diseases than in controls, a so-called association study. If this study is performed on hundreds of thousands of common markers, this association study becomes a genome-wide association study, a GWAS. Given the large number of variants tested in parallel, it typically takes a lot for a genetic variant to “stand out,” and statistical testing typically operates with extremely small p-values to ensure that we don’t fall prey to false positive findings. One common value that the field agrees on is not the typical 0.05, but 5 × 10−8. While genome-wide association studies have been very successful in many common disorders such as diabetes or hypertension, it took a while for this technology to catch on in the epilepsy field. Only recently have sample sizes becomes sufficiently large to find common genetic variants that are associated with epilepsy beyond doubt.

BioBank Japan Project. In the study by Ishigaki and collaborators, more than 200,000 individuals were genotyped for common variants, and genome-wide association studies were performed on 42 disorders. The major value of their study was the contribution to association findings in many common disorders, which helped narrow down previously known regions and identify new regions that harbor risk for common disorders, identifying a total of 276 loci in 27 diseases. Epilepsy was amongst the disorders assessed in their study – the author did not refine this further with respect to the epilepsy type or syndrome, and the 2,143 individuals with epilepsy most likely represent a cross-section of the various epilepsies with generalized and focal epilepsies, including lesional epilepsies.

Epilepsy in the BBJ study. No single variant emerged as significant in the epilepsy cohort. However, the authors investigated the variants that initially emerged from the 2014 ILAE study, including the rs6732655 variant in the vicinity of SCN1A. While three out of four variants identified in the 2014 ILAE study had no overlap with respect to the odds ratios (Figure 1), both the ILAE and BBJ study overlap with respect to the effect of the rs6732655 variant. This means that we can safely say that the common variants in vicinity of VRK2, PCHD7, and MMP8 are not risk factors for the epilepsies across various populations. However, there seems to be a consistent signal with respect to the rs6732655 variant in both studies, aligned with the strong signal in the SCN1A region that was also confirmed in the 2018 ILAE GWAS study.

What you need to know. Overall, there is no independent signal for the epilepsies in the genome-wide association study of 2,100 individuals with epilepsy compared to >210,000 controls. However, there is an overlapping effect size for the previously reported rs6732655 variant that is in proximity to SCN1A. This may indicate that there could be a contribution of common variants with effects on SCN1A across various populations. This finding would be important, as it suggests that there are common genetic risk factors for the epilepsies that are present across populations.