FIRES. Without a clear trigger, some children suddenly develop super-refractory status epilepticus, ongoing seizure activity that is difficult to control despite maximal therapy in the intensive care unit. In cases when the onset of seizures is preceded by a febrile illness, these rare conditions are referred to as FIRES (Febrile Infection-Related Epilepsy Syndrome). Understanding why children develop FIRES has been an ongoing quest, and the underlying mechanisms are poorly understood. FIRES shares many features with some of the known genetic developmental and epileptic encephalopathies. In a recent study, we tried to understand the genetic basis of FIRES using exome sequencing and HLA sequencing. We were unable to identify genetic causes for FIRES, but we found interesting candidate genes and demonstrated that the genetic architecture of FIRES is substantially different from what we see in other genetic epilepsies. 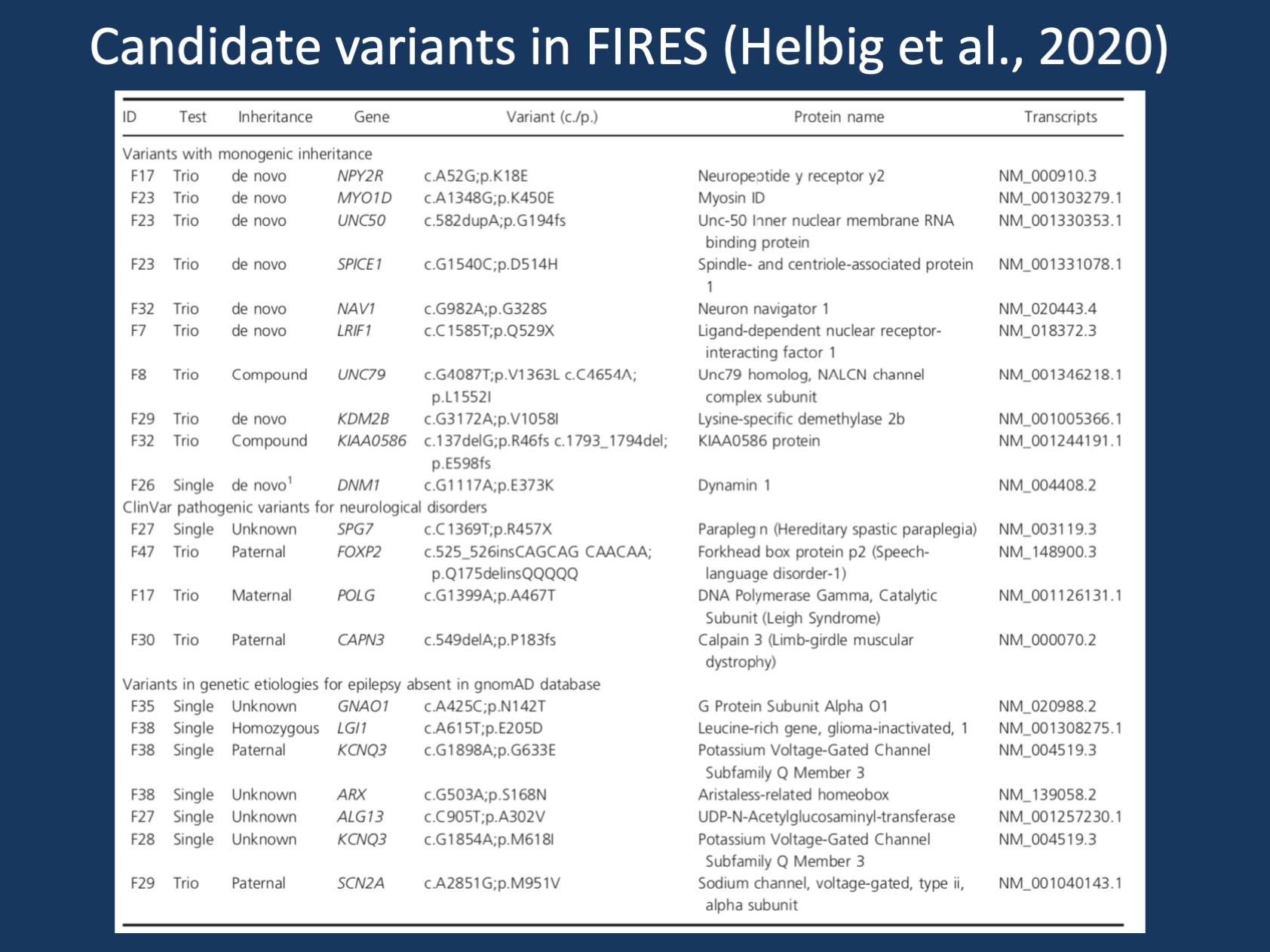 Figure 1. Candidate genes in FIRES based on exome sequencing in 50 individuals with FIRES. The table includes (a) de novo variants in individuals with FIRES, (b) pathogenic variants in FIRES reported in ClinVar, and (c) variants in epilepsy-related genes absent from the gnomAD database. A de novo variant in DNM1 (indicated by superscript 1) had been previously reported in a study by von Spiczak and collaborators, but this variant is substantially different from the other DNM1 variant based on this location in the dynamin protein.

NORSE and FIRES. Two terms are commonly used to describe the clinical picture in individuals with a new-onset super-refractory status epilepticus. The term NORSE (new-onset refractory status epilepticus) is the more general description, which is typically used in the adult setting. The term FIRES is typically used in the pediatric setting, even though these terms may be used interchangeably in some situations. FIRES is typically preceded by a febrile illness prior to seizure onset. This febrile illness is typically mild and given that infections are common in children, understanding whether there is a causal relationship is difficult. Nevertheless, the link to a prior febrile illness has raised the possibility that at least some cases of FIRES may have an auto-immune trigger. Both NORSE and FIRES are associated with a significant mortality and long-term morbidity and only a subset of children have a favorable outcome.

FIRES versus febrile status. One important point to notice is that status epilepticus in FIRES does NOT occur with fever, but AFTER the febrile illness has subsided. This important distinction sometimes gives rise to confusion. FIRES is conceptually different from febrile status epilepticus that may occur in the setting of a viral or bacterial infection. Febrile status epilepticus is much more common than FIRES and the prognosis differs depending on the cause of the underlying infection. In addition, FIRES is also separate from other neurological conditions, particularly mitochondrial disorders that may have their first manifestation with fever. For example, in PMPCB-related disorders that we described two years ago, children typically present with prolonged seizures during their first episodes. However, in these situations, seizures are often accompanied by observable findings on neuroimaging, such as areas of restricted diffusion that indicate brain injury. In contrast, neuroimaging in FIRES is unremarkable in the acute phase, even though children may develop atrophy over time. FIRES is rare with less than 50 children reported in the US every year.

Finding a cause for FIRES. To summarize research into the mechanisms of FIRES in a single sentence: there is some evidence for a dysregulation of the interleukin 1 response in children with FIRES, but the underlying mechanisms are entirely unknown. In order to understand the mechanisms of FIRES, we performed whole-exome sequencing in 50 individuals with FIRES, including 27 patient-parent trios. We systematically analyzed this dataset for monogenic variants and novel candidate variants and also performed HLA sequencing in 29 individuals. HLA sequencing looks at the genetic make-up of the highly variable human leukocyte antigen (HLA) regions that are implicated in the generation of auto-immune disorders. For example, in the epilepsies, there is a very strong association with a specific HLA allele (HLA-B*1502) with carbamazepine-induced Stevens–Johnson syndrome and toxic epidermal necrolysis.

Genetic results in FIRES. Overall our study was negative. None of the 50 individuals had genetic causes that we could identify despite our best attempts. I should note at this point that our cohort represents the largest genetic study in FIRES so far that has largely been recruited over more than a decade by two major European centers that specialize in FIRES (Kiel, Paris). Despite this, our study is small compared to the large studies that we are used to in the genetics field. Nevertheless, even a cohort of this size allows for the conclusion that FIRES is different from what we would expect in other genetic epilepsies. We had previously shown that FIRES is not due to disease-causing variants in SCN1A, PCDH19 or POLG. In our new study, we expand these negative findings to a full panel of 101 epilepsy-related genes that we assessed in our FIRES cohort. We calculated the probability of such a negative result given our cohort size and concluded that our cohort was sufficiently large to find at least 2-3 individuals with a known genetic cause if the genetics of FIRES was comparable to conditions such as Lennox-Gastaut Syndrome or West Syndrome. Our conclusion is that the genetic answer to FIRES may lie elsewhere – potentially outside the coding regions of known genes.

Candidate variants in FIRES. In the absence of clear explanations, we examined potential candidate variants. We found eight individuals with de novo variants and two individuals with compound heterozygous variants that we consider candidate genes, including intriguing candidate genes such as NAV1 (Neuron navigator 1) and UNC79, which code for a NALCN channel complex subunit, a brain-expressed nonselective sodium leak channel. A Disease-causing variant in UNC80, part of the same complex, has recently been described in childhood static encephalopathies. We also assessed potential variants in known epilepsy genes. Most prominently, we included an individual with a previously reported de novo variant in DNM1 (c.G1117A;p.E373K). We know DNM1 well, given that we had initially reported the clinical spectrum of this condition. However, both the clinical picture and the specific variant in DNM1 is substantially different from what we found previously. Disease-causing variants in DNM1 are highly recurrent and the DNM1 variant observed in the individual with FIRES lies outside of known regions associated with DNM1-related disorders.

Ion channel variants in FIRES. We also found two KCNQ3 and one SCN2A variants in individuals with FIRES, genes coding for epilepsy-related ion channels that we are working on in our NINDS-funded Center Without Walls (link) where our team co-leads the variant prioritization and curation core. Both variants were either inherited or inheritance could not be assessed, and we concluded that these variants are likely unrelated to FIRES. Both KCNQ3 variants were found in the C-terminal end, where population variants in this gene are common. The SCN2A variant occurred very close to the selectivity filter, a domain that is typically related to disease-causing variants and where paralogous variants (variants at the same position in related genes) have been observed in SCN1A in Dravet Syndrome. However, the SCN2A variant was inherited from an unaffected parent, making it unlikely that it represents the single cause of the patient’s epilepsy.

What you need to know. The genetic basis of FIRES remain elusive despite our best efforts. FIRES does not fall into the typical spectrum of the genetic epilepsies. Even though we cannot exclude that a small subset of children with FIRES have disease-causing variant in known epilepsy genes, such findings would not be typical of FIRES more broadly. The absence of known genetic causes strongly suggests that FIRES does not overlap genetically with other severe epilepsy syndromes, but rather constitutes its own, distinct entity. Given the absence of explanatory factors, the disease-mechanism in FIRES remains mysterious.

Future directions. Supported through a research grant by the NORSE Institute, we aim to examine the role of candidate variants through gene network analysis and examine potential genetic causes outside the coding region through genome sequencing. We expect that network analysis will help us identify candidate pathways for FIRES and will serve as the first step to identify potential mechanisms for therapeutic intervention. Genome sequencing will be critical as an increasing number of genetic causes are found outside the coding regions. For example, de novo variants in regulatory regions are estimated to account for up to 5% of individuals with neurodevelopmental disorders. Given the complete absence of disease-causing variants in coding regions in individuals with FIRES, we hypothesize that we may be able to identify disease-causing variants in these regions that are increasingly understood as a source of genetic morbidity.