Beyond GRIN2A. The childhood epilepsies traditionally referred to as Benign Rolandic Epilepsy (BRE) or benign epilepsy with centro-temporal spikes (BECTS) have had various names in the past, which reflects somewhat the difficulties of fully putting this group of seizure disorders into clear categories. While most presentations are relatively mild and self-limited childhood epilepsies, a sizeable fraction of these non-lesional focal epilepsies have an atypical course. The genetics of the rolandic epilepsies and the related epilepsy-aphasia spectrum are tightly linked to GRIN2A, the most prominent gene in this group of conditions. However, are there other genes? A recent publication examined the genetic basis of self-limited focal epilepsies of childhood and found interesting new candidate genes in atypical presentations. 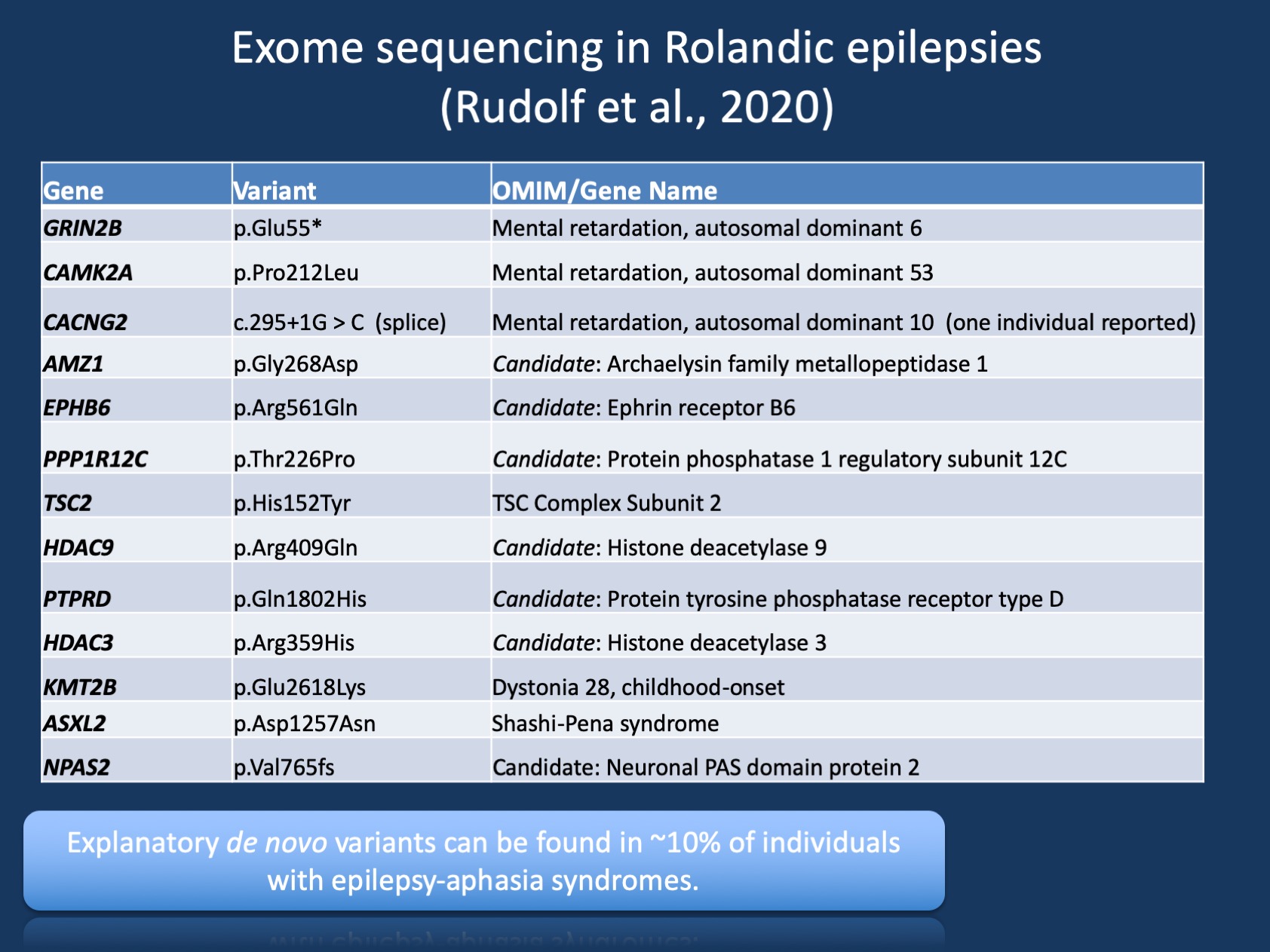 The epilepsy-aphasia spectrum. Several of my recent blog posts have started with a section on our naming conventions of the epilepsies that I am discussing. With the rolandic epilepsies (using an outdated term), I would like to take a somewhat different approach and refer to these conditions jointly as epilepsies within the epilepsy-aphasia spectrum (EAS). The concept of this spectrum links a group of epilepsies and neurodevelopmental disorders where speech is prominently affected. The self-limited epilepsy referred to as benign epilepsy with centro-temporal spikes (BECTS) or Benign Rolandic Epilepsy (BRE) represents the most frequent and mild presentation of this spectrum, while conditions such as Landau-Kleffner Syndrome and Continuous Spike-Wave during Sleep (CSWS) and Electrical Status Epilepticus in Sleep (ESES) are on the more severe end of this spectrum. CSWS and ESES are epileptic encephalopathies where the abnormal electrographic activity is thought to contribute to cognitive and speech issues, sometimes even in the absence of obvious clinical seizures.

The genetics of EAS. GRIN2A represents the major gene in the epilepsy aphasias and is largely found in children with EAS-related epileptic encephalopathies and neurodevelopmental disorders. In the initial publications on GRIN2A, several individuals and families with BECTS had been included. However, some of these publications predate the publication of large genetic population databases and would not necessarily be considered disease-causing in 2020. In summary, the role of GRIN2A in mild self-limiting focal epilepsies of childhood is not well established. While other genetic causes have been suggested, only 16p11.2 duplications are genetic risk factors that were reported in larger sample sizes or independent studies. In addition, many other genetic causes and risk factors have been suggested and remain to be validated. In the recent study by Rudolf and collaborators, 57 individuals with typical and atypical self-limited focal epilepsies of childhood underwent trio exome sequencing to identify novel de novo variants.

Genetic finding in typical rolandic epilepsies. Only two de novo variants were found in individuals with typical rolandic epilepsies, including a de novo missense variant in a gene called AMZ1, which encodes archaelysin family metallopeptidase 1. This de novo variant is not the most likely candidate, with a single heterozygous variant count in gnomAD and a pLI of 1, and will require further examination. However, the second de novo variant was more interesting. Individual EPI40 had a de novo variant in PTPRD, encoding protein tyrosine phosphatase receptor type D, a brain-expressed, constrained gene that has been demonstrated to be involved in regulating hippocampal long-term potentiation and learning. At least one additional individual with a de novo variant in PTPRD has been reported in the DDD study, making this gene an interesting candidate for neurodevelopmental disorders.

What you need to know. Rudolf and collaborators performed trio exome sequencing in typical and atypical rolandic epilepsies, identifying disease-causing variants in a small subset of individuals with atypical rolandic epilepsies and a large number of interesting candidate variants. Whole-exome sequencing in the entire rolandic spectrum has a yield of ~10% (6/57 cases) to identify variants that are either pathogenic, likely pathogenic, or occur in disease genes for related disorders. This suggests that de novo variants contribute to the overall genetic burden in the epilepsy aphasias, but do not explain the majority of the presumed genetic burden.