MAE. There are many distinct childhood epilepsy syndromes that we have become critically aware of in the genomic era as they are linked to prominent genetic causes, including Dravet Syndrome (SCN1A) and Epilepsy of Infancy with Migrating Focal Seizures (KCNT1). However, there are many other epilepsy syndromes where a genetic cause has long been suspected, but has remained elusive. One of the epilepsy syndromes that has largely remained unexplored is Doose Syndrome, also referred to as Myoclonic Astatic Epilepsy (MAE) or Epilepsy with Myoclonic-Atonic Seizures. In a recent study in Epilepsia, we explored the genetic architecture of Doose Syndrome and identified monogenic causes in 14% of individuals, including SYNGAP1, NEXMIF (KIAA2022), and SLC6A1. Our study suggests that Doose Syndrome is genetically heterogeneous, possibly with a distinct genetic landscape. 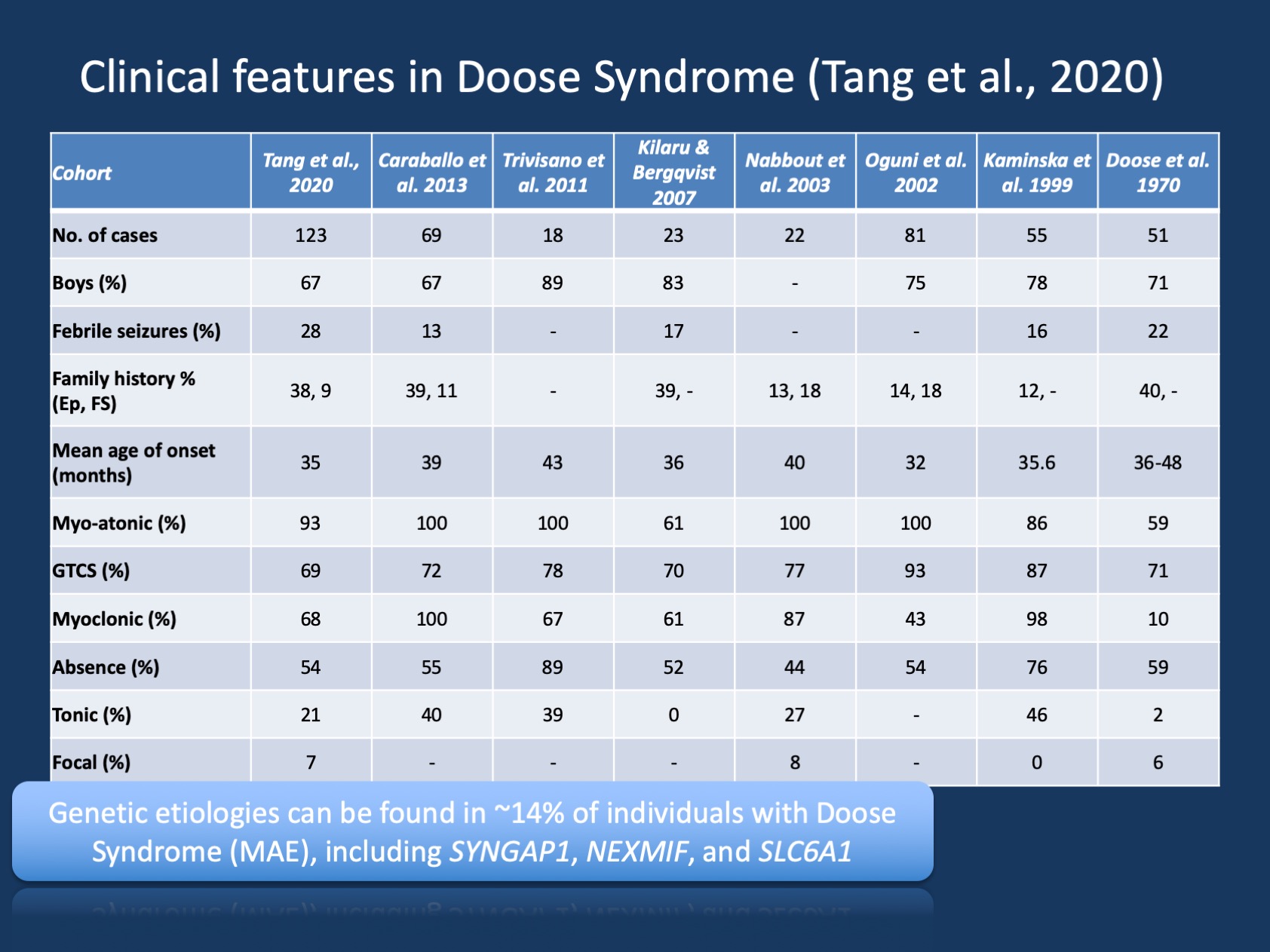 The history of MAE. First of all, let me clear up some naming issues. Doose Syndrome or Myoclonic Astatic Epilepsy (MAE) is now officially referred to as Epilepsy with Myoclonic-Atonic Seizures using the most recent naming convention. However, while we typically try to align ourselves with the official way of how epilepsy-related terms are used, let me be a bit stubborn here. As a child neurologist trained at the Department of Neuropediatrics in Kiel, Germany, I will refer to this condition as Doose Syndrome using MAE as a shorthand, honoring Hermann Doose (1927-2018) who is one of the founders of European pediatric epileptology (link to ILAE in memoriam). Many native English speakers typically get the pronunciation wrong – the correct pronunciation is “Dohs-ah” and does NOT rhyme with “goose”.

The clinical picture of MAE. Doose is typically credited with making an important clinical observation: in the 1960s, he and his collaborators in Kiel recognized an unusual epilepsy in children that was characterized by sudden onset of drop attacks (atonic seizures), myoclonic seizures, generalized tonic-clonic seizures, and a generalized EEG pattern, typically occurring between the age of two and five. This epilepsy typically occurred in children with prior typical development (see below) and often resulted in developmental delay and intellectual disability. Doose and collaborators recognized that this newly recognized epilepsy syndrome was different from Lennox-Gastaut Syndrome or epilepsies with generalized tonic-clonic seizures precipitated by fever, the latter of which were subsequently conceptualized as Dravet Syndrome.

Understanding MAE. Clinical descriptions of Doose Syndrome (MAE) have been steady over the years, but MAE has not received as much attention as childhood epilepsy syndromes where a genetic basis had been discovered and where targeted research may allow for novel treatments. In our recent publication by Tang and collaborators, we have listed eight studies in the last 50 years between 1970 and 2020 with a total of 442 described individuals. Accordingly, MAE is rare, but it is common enough that most child neurologists and pediatric epileptologists are aware of this condition. Only a small subset of individuals with MAE have structural brain findings or metabolic abnormalities that explain the underlying epilepsy – in the vast majority of children with MAE, neuroimaging and metabolic work-up is unremarkable.

Finding the cause of MAE. The absence of explanatory imaging or metabolic findings raises the concern for an underlying genetic cause. While prior studies had tried to pin on a genetic contribution through epidemiological studies by assessing family histories, this traditional method has largely been superseded by recent discoveries in epilepsy genetics. Assessing the genetic basis of severe childhood epilepsies is now done through molecular genetics rather than genetic epidemiology. Assessing the genetic architecture of MAE was one of the goals in our study by Tang and collaborators that was published in Epilepsia.

Genetic findings in MAE. The genetic spectrum in MAE is different than in the epileptic encephalopathies at large. Genetic testing was performed in 85 individuals and 12/85 (14%) individuals had positive genetic findings. Three genes were found in two individuals, including SYNGAP1, NEXMIF (KIAA2022), and SLC6A1. This triad of genes has previously been linked to developmental and epileptic encephalopathies with generalized seizures. In addition, single individuals were found with disease-causing variants in KCNA2, SCN2A, STX1B, KCNB1, and MECP2. All these genes were previously discussed on our blog and are known to present with generalized seizures and generalized EEG features.

Absent genes in MAE. While some prior reports have found variants in SCN1A, this was not found in our cohort. In addition, other common epilepsy genes are notably absent, including CDKL5 and SLC2A1 (GLUT1). This suggests that the genetic landscape of MAE is somewhat distinct and different from other developmental and epileptic encephalopathies, even though only limited conclusions can be drawn from relatively small cohorts. The diagnostic yield in MAE is not very high – 14% is much lower than typically seen in the developmental and epileptic encephalopathies. However, when excluding individuals with typical development, the diagnostic yields is much higher, suggesting that genetic testing is of value in children with MAE. In general, even though no single individual with MAE had disease-causing variants in SLC2A1, genetic testing for treatable causes of genetic epilepsies may generally be considered in atypical generalized epilepsies.

The missing heritability of MAE. If genetic testing is negative for MAE in more than 80% of individuals, where is the hidden genetic burden? As of 2020, I would suggest two possible explanations. First, the genetic burden of generalized epilepsies is not entire unknown. More than 30% of the population risk for conditions such as Childhood Absence Epilepsy (CAE) or Juvenile Myoclonic Epilepsy (JME) is explained. However, this explanation is not given by single-gene causes, but by polygenic risk, referring to the additive effect of thousands of common genetic variants. It could be hypothesized that MAE may represent an “extreme phenotype” of generalized epilepsies where this polygenic risk is particularly high. This hypothesis is testable and will definitely be pursued in the future. In addition, there is more to the human genome than the exome – recent findings in the epilepsies have emphasized the role of non-coding variants, such as repeat expansions in Familial Adult Myoclonic Epilepsy (FAME). Given the strikingly similar clinical features in many children with MAE, it may still be reasonable to look for a common genetic cause for many children with MAE outside the exome, using whole genome sequencing. Taking together, assessing polygenic risk scores (PRS) and whole genome sequencing (WGS) are two potential avenues to further identify the genetic basis of MAE.

What you need to know. Doose Syndrome (MAE) is a presumably genetic epilepsy syndrome with a heterogeneous cause. Disease-causing variants are present in 14% of children and are typically identified in children with additional neurodevelopmental features such as developmental delay or autism. A triad of genes including SYNGAP1, NEXMIF (KIAA2022), and SLC6A1, are recurrent genetic causes that may hint at a shared underlying biology that is somewhat distinct from other developmental and epileptic encephalopathies.