What is the most common monogenic cause of epilepsy? This is a question we often ask students and trainees who rotate with us in our Epilepsy Neurogenetics Clinic. This is not meant to be a trick question, and the answer we previously sought was based largely on published studies, estimates of population frequency of individual genetic epilepsies, and our own clinical experience. And we are sometimes surprised by how skewed such a view can be. Now, a new study by Symonds and colleagues answers the question of population-incidence of common genetic epilepsy syndromes through a prospective population-based cohort study in Scotland. This study provides important data on risk factors that are more likely to predict a genetic diagnosis in infants and young children with seizures and answers the question of which genetic epilepsy is most common. I was initially surprised, but really not surprised at all, by the answer. 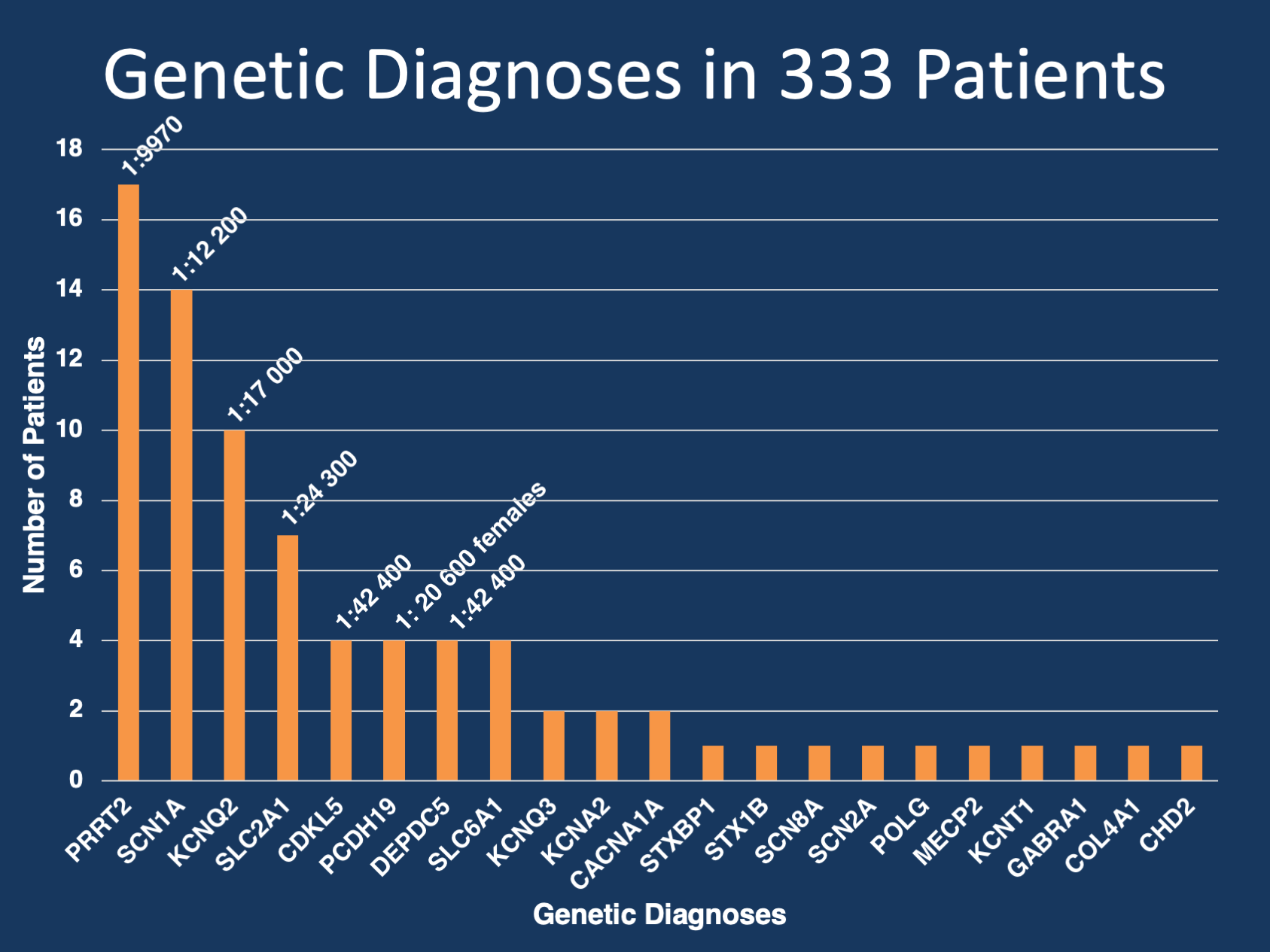 The genetics of childhood epilepsy in Scotland. All genetic diagnoses in a population-based cohort of 333 patients presenting with seizures under 36 months collected over a three-year period. This chart provides the answer to the most common genetic epilepsy identified in this study. Incidence estimates are provided for individual genes, where such estimates were possible.

Study design. Over a three-year period, Symonds and colleagues enrolled children under 36 months of age from all pediatric departments and tertiary hospitals in Scotland who (1) received a new epilepsy diagnosis, (2) presented with febrile or afebrile status epilepticus, (3) presented with ≥2 febrile or afebrile seizures in less than 24 hours, or (4) presented with a second prolonged febrile seizure over any time period. This population-based approach is predicted to have captured nearly all children during the study period who presented with new-onset seizures. Altogether 343 children were enrolled, and genetic testing using a 104 gene epilepsy panel was performed on 333/343 of these children. The design of this study is unique, and few other studies capture entire populations to this degree of completeness.

Clinical presentations of infantile- and childhood-onset epilepsies. In this cohort, the factors that predicted a positive genetic diagnosis were (1) seizure onset before 6 months and (2) afebrile focal seizures as the presenting seizure type. Factors that made a genetic diagnosis less likely were seizure onset between 12-24 months and presenting with simple febrile seizures. The diagnostic yield among Developmental and Epileptic Encephalopathies was over 50%, emphasizing the role of genetic factors in this group. However, this was notably lower in West Syndrome, where only 3/27 (11%) children had a positive genetic diagnosis. These data are also interesting for what was not found. Not a single patient with Early-Onset Absence Epilepsy or Febrile Seizures Plus had a positive genetic finding.

So what is the most common genetic epilepsy? In this cohort, the answer is PRRT2-related epilepsies, with an incidence of 1:9970 live births. If you answered Dravet syndrome and SCN1A-related epilepsies, I would probably still give you full credit. This is always the answer we have looked for when posing this question previously, and SCN1A-related epilepsies are a close second, with an estimated incidence of 1:12,200 live births, which is notably more common than previous estimates. Given the overlapping 95% confidence intervals for both PRRT2 and SCN1A, it is actually not possible to determine from these data which is truly more common. However, this study confirms that genetic epilepsies of childhood collectively are very common, with an estimated collective incidence of 1 per 2000 live births. Interestingly, this study verifies what other recent non-population-based studies have told us regarding the utility of genetic testing in the epilepsies, particularly the diagnostic yield of 24% (80/333). Additionally, 84% of genetic diagnoses were in the top 10 most common genes, consistent with the study by Lindy and collaborators, who similarly found that 80% of pathogenic variants are found in the top 13 genes. Taken together, childhood epilepsies have a strong genetic burden, and the causative genes are known suspects.

Limitations. This is a relatively small sample size of 343 children from Scotland, so the extent to which these findings are generalizable to other populations remains to be seen. However, many of the most common genetic epilepsies are the result of de novo variants, suggesting that these are not population-specific findings. By only including children under the age of 36 months, this study likely underestimates the incidence of genetic epilepsies that are associated with later seizure onset or no seizures at all, including DEPDC5, SCN2A, and STXBP1. Finally, the authors excluded children with a presumed symptomatic etiology, such as hypoxic ischemic injury, infections, metabolic conditions, and perinatal stroke, which may underestimate genetic factors associated with these conditions.

What you need to know. The study by Symonds and collaborators provides prospective population-based data regarding genetic epilepsies beginning in early childhood. Genetic epilepsies beginning in the first three years of life are common, with an estimated incidence of 1 per 2000 live births. The most common genetic causes of childhood-onset epilepsies are pathogenic variants in PRRT2, SCN1A, KCNQ2, and SLC2A1. Factors that predict a positive genetic diagnosis are seizure onset in the first 6 months of life and afebrile focal seizures as the presenting seizure type. The estimated diagnostic yield in children with seizure onset before 3 years is approximately 25%, and over 80% of genetic diagnoses are accounted for by the 10 most common genes, advocating for a more targeted approach to genetic testing in this population.