Heat at the synapse revisited. STX1B encodes syntaxin 1B, one of three proteins – along with SNAP25 and synaptobrevin – that form the SNARE complex. The SNARE complex is part of the protein machinery responsible for Ca2+-dependent fusion of the presynaptic neuronal cell membrane with the synaptic vesicle to enable neurotransmitter exocytosis. STXBP1 also plays an important role in this process, as the syntaxin binding protein encoded by STXBP1 interacts with the SNARE complex via binding to syntaxin. While pathogenic variants in STXBP1 are a well-established cause of early-onset epilepsies and related neurodevelopmental disorders, after the initial description of STX1B-related epilepsies in 2014, very little more was heard regarding STX1B in the intervening four years. Now, we contributed patients to a publication in Neurology, which provides an update regarding the clinical and genetic landscape of STX1B-related epilepsies. 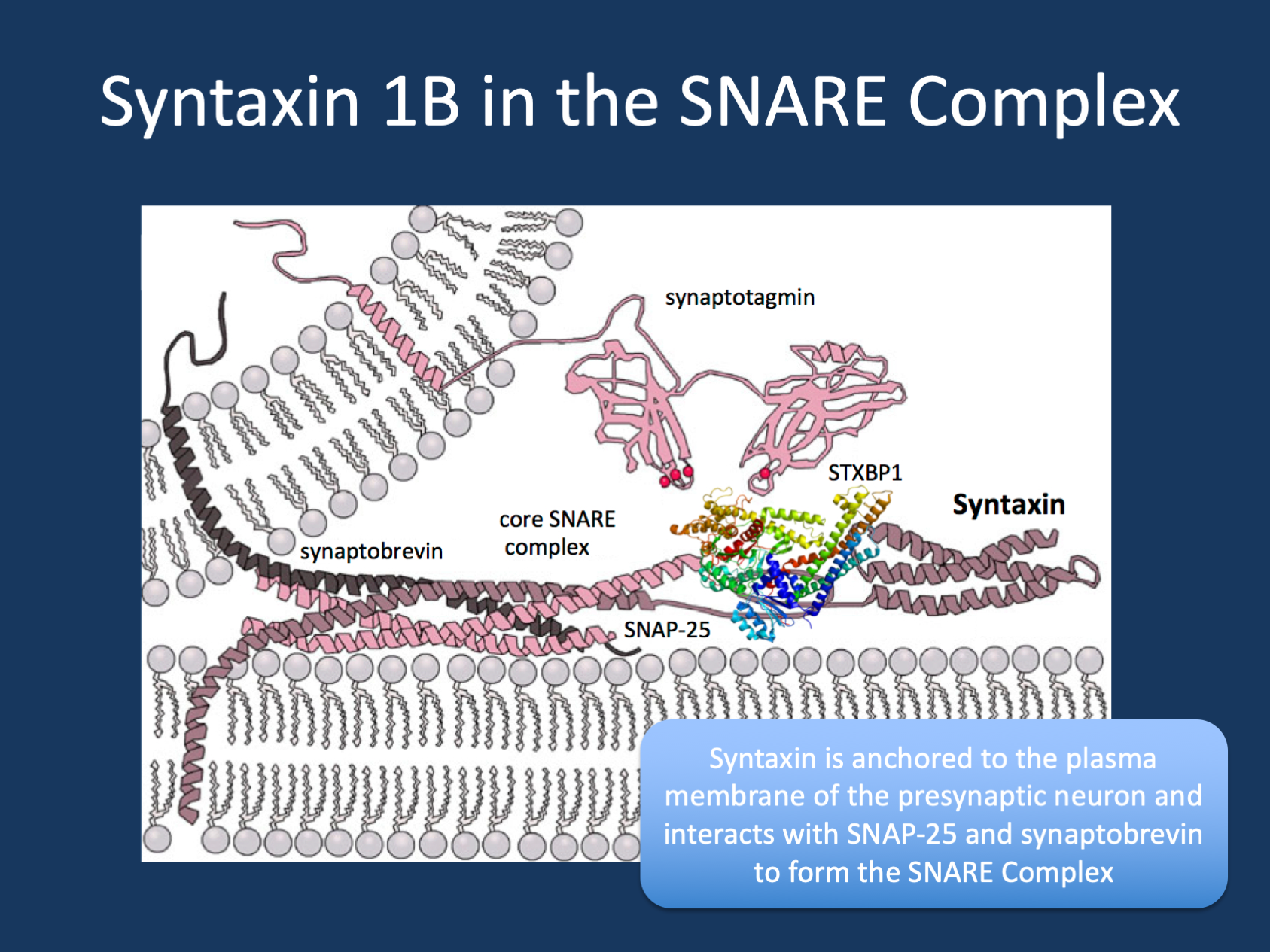 Figure. The SNARE complex is the molecular machinery that drives the fusion of the synaptic vesical and the neuronal plasma membrane, which is critical to neurotransmitter exocytosis. The SNARE complex is comprised of SNAP25, synaptobrevin, and syntaxin 1B (STX1B). De novo missense variants in patients with DEEs cluster in the transmembrane domain and SNARE domain of STX1B. The STX1B SNARE domain serves as a docking site for synaptobrevin and SNAP25. (modified under a Creative Commons license from http://en.wikipedia.org/wiki/Syntaxin)

Broad clinical heterogeneity.The current study by Wolking and collaborators describe the clinical and genetic findings in 49 individuals from 23 families with STX1B-related epilepsies, including newly described as well as previously reported individuals. As already described in the first discovery of STX1B, fever-associated seizures are seen in a majority of patients. However, the new study expands the clinical spectrum of STX1B-related disorders and proposes four distinct phenotypic groups: (1) GEFS+, (2) Juvenile Myoclonic Epilepsy (JME), (3) Developmental and Epileptic Encephalopathies (DEEs), and (4) focal epilepsy. The patients with milder GEFS+ phenotypes presented with febrile seizures in early childhood with a median age of onset 20 months and often developed additional seizure types, which included generalized tonic-clonic, atonic, tonic, absence, and focal impaired awareness seizures. Nearly all patients became seizure free, over half of them without any antiepileptic drugs. The more severe Developmental and Epileptic Encephalopathies had somewhat earlier seizure onset and also tended to have febrile seizures with additional afebrile generalized seizure types. However, in this patient group development plateaued or regressed with seizure onset, leading to mild to severe intellectual disability. Other neurological features such as ataxia and dysarthria were common in this group. The role of STX1B in focal epilepsy remains unclear, as only two patients were reported without any parental or familial testing.

The genetic landscape. A broad spectrum of genetic variants was identified, including inherited and de novo loss-of-function and missense variants. Individuals with milder or more benign phenotypes including GEFS+ often had inherited variants; instances of reduced penetrance were reported in some families. Where parental testing was performed, STX1B variants were found to be de novo in patients with DEEs. Truncating variants were more often found in patients with milder phenotypes; however, some patients with DEE were also reported with truncating variants, indicating that haploinsufficiency may be associated with milder outcomes in some but not all cases. Patients with DEEs typically were found to have de novo missense variants, often clustering in the SNARE motif and transmembrane regions, which are important for interactions with other components of the SNARE complex and anchoring syntaxin 1B in the cell membrane. This suggests that missense variants may be associated with more severe phenotypes. Paralog analysis, which aligned protein sequences of seven paralogous genes in the syntaxin protein family, demonstrated that the SNARE motif was the most paralog-conserved and gnomAD variant depleted region of STX1B.

Similarities with other synapse disorders. Syntaxin 1B (STX1B) and syntaxin binding protein 1 (STXBP1) both play critical roles in synaptic vesicle docking and fusion. As such, pathogenic variants in both associated genes cause similar clinical features including infantile or childhood onset seizures, developmental delays, and notably ataxia. However, given how critical both proteins are in the process of synaptic vesicle fusion and exocytosis, it is also notable how different both neurodevelopmental disorders are in their presentations and severity. Many individuals with STXBP1-encephalopathy present with early-onset epileptic encephalopathies, including Ohtahara syndrome and West syndrome, which are not associated with STX1B. Febrile seizures, conversely, are a prominent feature of STX1B-related epilepsies but are not a typical feature of STXBP1-encephalopathy. And finally, although the spectrum of STXBP1-encephalopathy is broad in terms of seizure presentations and range of outcomes, developmental outcomes tend to fall in the moderate to profound impairment range. So far, we do not know of any individuals with STXBP1-encephalopathy who have typical developmental outcomes, which is unlike STX1B-related epilepsies, which are associated with benign outcomes such as GEFS+ and Genetic Generalized Epilepsies without associated cognitive impairment in a substantial proportion of individuals. Understanding why dysfunction in two such tightly linked proteins can result in such diverging syndromes will be important in explaining the underlying biology of these two genetic epilepsies.

What you need to know. Wolking and collaborators expand the spectrum of STX1B-related epilepsies, which typically present in early childhood and are often associated with fever. Associated phenotypes can be divided into mild and severe categories, which may be associated with the underlying genetic variant. There is some suggestion that haploinsufficiency may be associated more often with milder or benign phenotypes such as GEFS+ or Genetic Generalized Epilepsies and de novo missense variants, particularly in the SNARE motif, are more often identified in patients with Developmental and Epileptic Encephalopathies. However, some patients with more severe phenotypes have been reported with loss-of-function variants as well, so genotype-phenotype correlations are still not clear.