Clinical relevance. Pathogenic variants in more than 80 genes have been reported in childhood epilepsies over the last two decades. Developing precision therapies that target the underlying genetic changes is a major research focus and holds the promise to positively influence the lives of thousands of people with individually rare, but collectively common genetic epilepsies. However, in order to develop novel therapies, a formal, unbiased framework is needed to define whether the association between certain gene and disease is in fact valid and that a specific variant is truly pathogenic. This task has proven to be much more difficult than initially expected. Within the larger framework of the ClinGen Consortium, our epilepsy expert panel assesses the clinical validity of genes and variants for human epilepsies, starting with gene curation. In the recently published Human Mutation Special Issue on ClinGen/ClinVar, our panel reports our pilot data and reviews what it takes to connect two increasingly separate fields: the domain of traditional clinical epileptology and the rapidly evolving area of diagnostic genetic testing. Brace yourself: 50% of the alleged gene-disease associations evaluated in our pilot phase did not meet the criteria to be considered clinically valid. 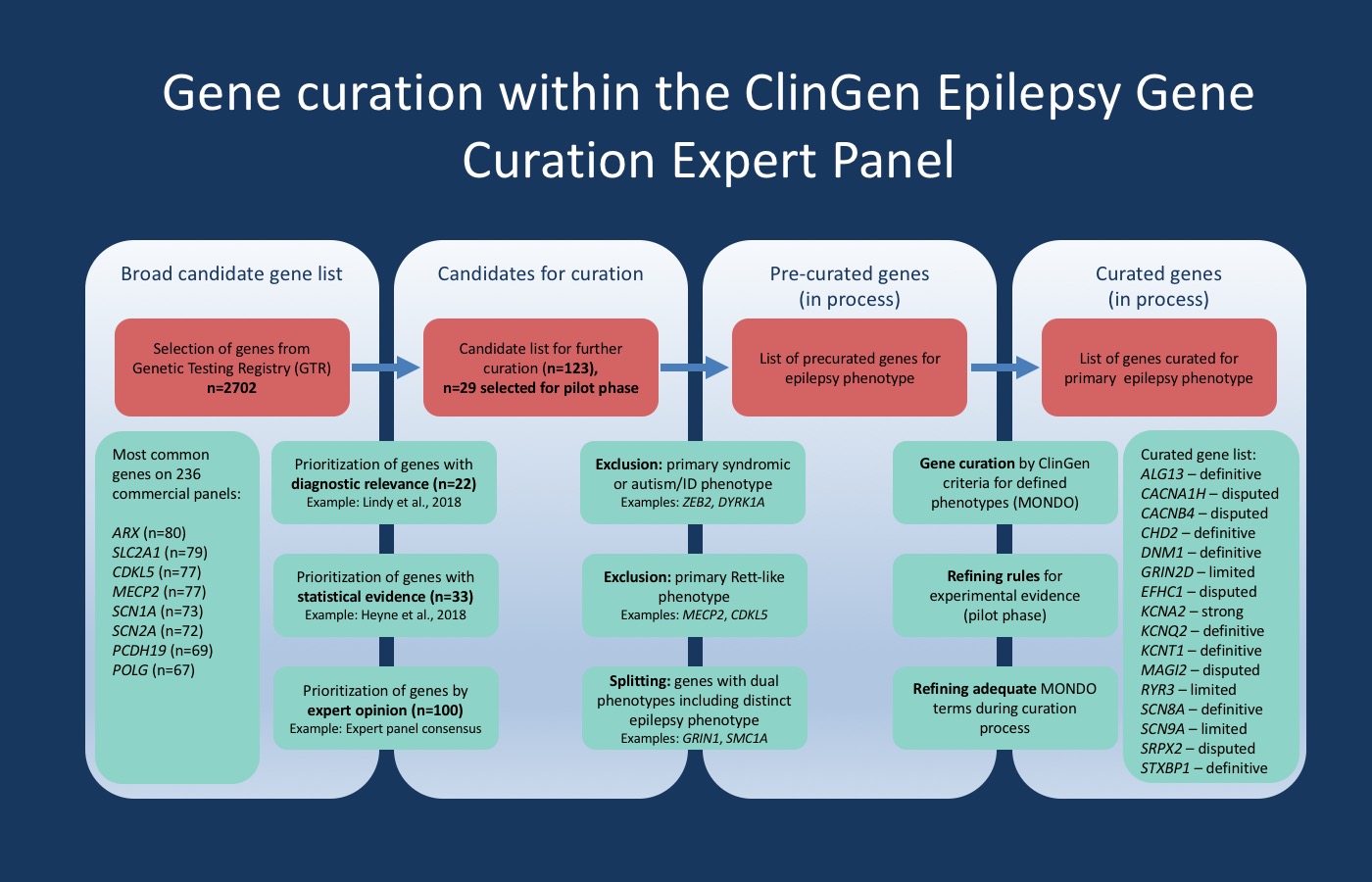 Figure 1. Gene selection and precuration process within the ClinGen Epilepsy Working Group. Starting with a broad candidate list of genes compiled from genes available on commercial gene panel (n=2702, the possible candidate genes are narrowed down and supplemented by genes with diagnostic relevance, genes with statistical evidence and genes suggested by expert opinion. This selection process provides a more narrow list of candidate genes, including 123 candidate genes as of April 2018.

What it takes for variants in a gene to be associated with epilepsy. Let us take a brief, critical look at gene discovery in human epilepsies. Reporting a gene discovery or association with a new epilepsy phenotype hinges on “novelty”, e.g. there is an inherent bias to report new findings, including potentially new genetic etiologies. However, in order to use genetic findings for any meaningful therapy decisions, a joint framework is required to assess whether findings are valid. This is particularly true as the field of human genetics has undergone a profound paradigm change in the last decade. Any proposed genetic finding, either a new gene-disease association or a new variant, has a steep uphill battle to fight to be considered relevant to disease. What has lacked so far was a formal, agreed-upon framework that defines the clinical relevance of genes and variants for use in precision medicine and research. This framework is now emerging within the ClinGen Consortium.

The ClinGen framework. ClinGen is a large NIH-funded consortium focused on building an authoritative central resource for genes and variants linked to human disease. Within this larger framework, our ClinGen Epilepsy Gene Curation Expert Panel focuses on assessing the evidence for genes linked to human epilepsy. In our recent publication in Human Mutation, we share our first results and discuss some of the unique challenges that we have encountered during this process.

The great divide. What is probably not known to most people in the field is the fact that we’re facing an increasing divide between the epilepsy field and the genetic diagnostic fields. While the area of epileptology has its own language and tradition of phenotyping, this is typically not used in a diagnostic context – often for a good reason. Diagnostic laboratories require standardization that often must span various disease domains. Therefore, general rules are needed where the domain knowledge within a certain field may add confusion. Why is this important? Each time you order a gene panel or exome, the lab considers the phenotypic overlap of your patient and phenotypes associated with genes identified via sequencing. In fact, whether a variant of uncertain significance is reported or not is often decided by the laboratory based on available phenotype information. And the way that this information is coded and used, is frequently done in a different format, using Human Phenotype Ontology (HPO) and MONDO disease ontology terms. The frequent use of these ontologies was one reason why our research group is currently focusing on understanding how these ontologies can be used in epilepsy genetics as so-called “computational phenotypes”. In summary, epileptology and genetic diagnostics are drifting apart – and as the ClinGen Epilepsy Gene Curation Expert Panel, it fell to us to bridge this divide. Here are our first results and some initial lessons learned. 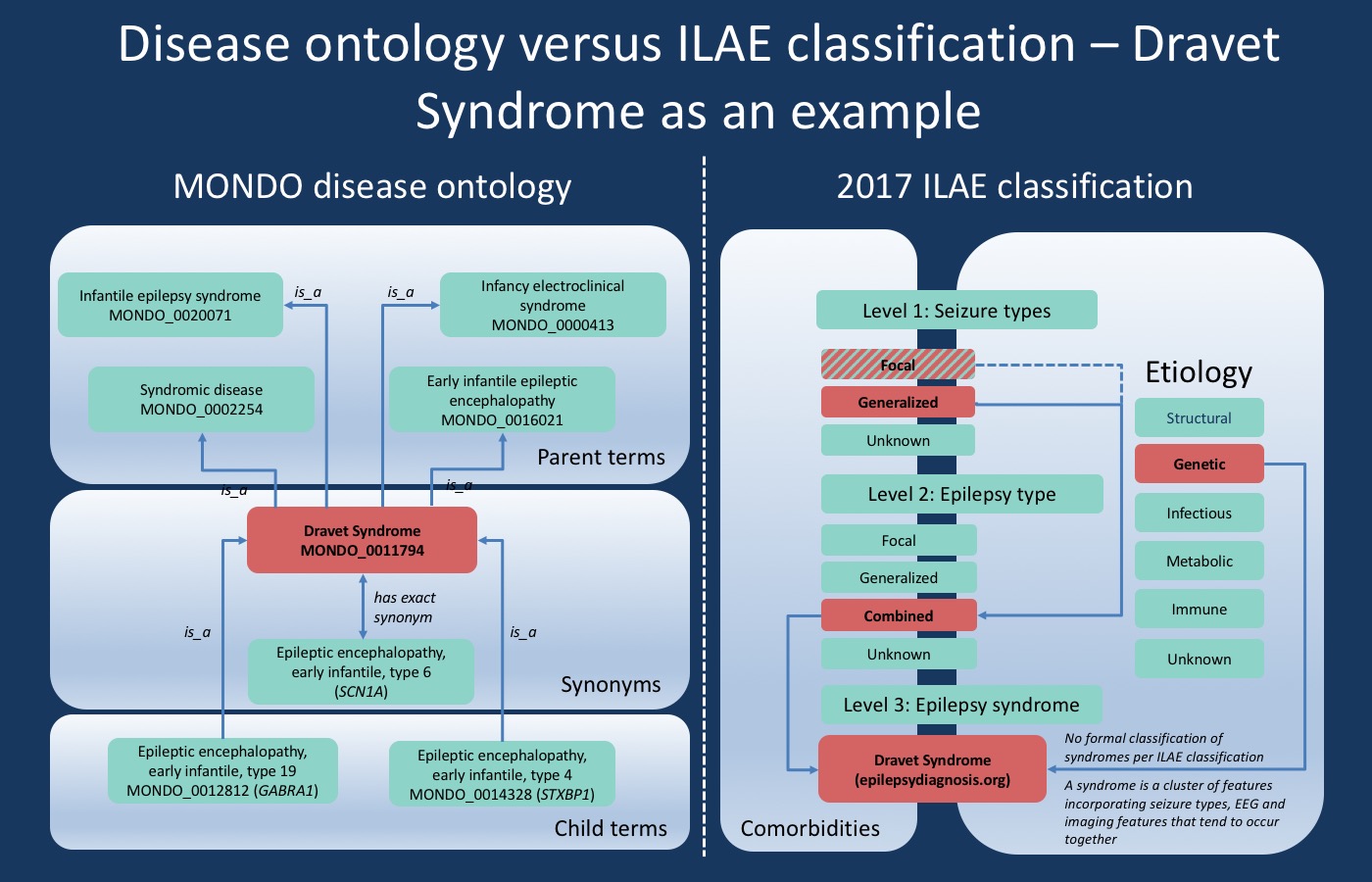 Figure 2. Differences between then MONDO ontology used in the ClinGen gene curation process and the International League Against Epilepsy (ILAE) classification, using the example of Dravet Syndrome (MONDO_0011794).

Lumping and splitting. In our first pilot, we assessed what needs to be done to adjust the ClinGen framework to epilepsy genetics. One of the first things we realized was that we can’t just start curating. We need to “pre-curate” by identifying what disease entities associated with a particular gene we must consider and whether we are dealing with a spectrum or distinct conditions. For example, KCNQ2–related epilepsies were split into two clinically distinct disease entities: KCNQ2-encephalopaty and self-limited neonatal seizures. However, KCNT1-related conditions were considered a broad spectrum of childhood-onset epilepsy syndromes, due to overlapping phenotypes within families and a spectrum of phenotypes associated with the same pathogenic KCNT1 variants. Because the ClinGen curation process requires us to commit to a MONDO disease ontology term for each disease-gene relationship, this process has been interesting and even required us to create a new MONDO disease term. The initial consideration of disease entities follows a somewhat different format than what we are used to in clinical epileptology. In order for disease-entities associated with a single gene to be split rather than lumped into a spectrum, the disease entities must be truly distinct with different phenotypes and mechanisms. In fact, when you review the evidence, many of the distinctions between subtypes of genetic epilepsies do not meet these criteria. KCNT1-related epilepsies are a good example of this, where the Expert Panel decided to lump these epilepsies into a broad spectrum rather than separating out Epilepsy of Infancy with Migrating Focal Seizures and Nocturnal Frontal Lobe Epilepsy into two distinct disease entities. But – as you can image in a panel with neurologists, geneticists, genetic counselors, and basic researchers – this had led to repeated discussions.

The pilot project of 16 genes. We started our curation pilot with 16 genes with the ambitious aim to complete a panel of ~100 genes within one year. Gene curation requires going back to the primary literature and evaluating both the genetic and functional evidence. The ClinGen clinical validity framework assigns points for two types evidence, both genetic and experimental, to determine strength of the evidence for gene–disease associations. The classifications include: “Definitive,” “Strong,” “Moderate,” “Limited,” “No Reported Evidence,” and “Disputed.” For a classification of “Definitive,” a gene–disease association must accumulate at least 12 points and demonstrate replication over time with at least 3 years since the initial report. Gene curation is a major effort and requires several hours for a biocurator to assemble the data, followed by joint presentation and discussion of the panel. However, this is the most systematic and comprehensive review that these genes can undergo. The associations between epilepsy and ALG13, CHD2, DNM1, KCNQ2, KCNT1, SCN8A, and STXBP1 are definitive; these disease-gene relationships have been validated over time and have accrued sufficient points within the ClinGen gene curation framework. KCNA2 has strong evidence, but currently still lacks the replication over time. In contrast to these eight genes classified in the highest categories, GRIN2D, RYR3, and SCN9A only have limited evidence, and CACNA1H, CACNB4, EFHC1, MAGI2, and SRPX2 are disputed. The association of the latter genes can no longer be considered valid for human epilepsies. There is no evidence to support the reporting of variants in these genes in diagnostic gene panels or exomes.

Lessons learned. As one of the chairs of the ClinGen Epilepsy Gene Curation Expert Panel that connects to the ILAE Epilepsiome Task Force, the gene curation process has been very instructive for me. As a clinician, the ClinGen framework was unfamiliar in the beginning, but became more familiar over time and I began to realize that many of the questions I had had already been discussed in a related format in other expert panels. In this case the input of senior ClinGen members has been extremely useful, for example in case of lumping and splitting where ClinGen has already made their initial recommendation available online. Likewise, it was important for our panel to review how functional data can add to the gene curation, particularly in the case of somewhat circumstantial data. For example, should a mouse model for KCNA2 with ataxia but no spontaneous seizures count towards the validity of this gene in the context of human epilepsy? In our panel, we eventually agreed to score this, but with a reduce number of points, leading to a general recommendation how similar evidence should be handled in the future.

What you need to know. In summary, the ClinGen Epilepsy Gene Curation Expert Panel published the results of their pilot project within the Human Mutation Special Issue on ClinGen/ClinVar, focusing on the initial curation of 16 genes associated with epilepsy, a complex and detailed approach to review existing data in an unbiased format. While we confirmed that eight gene-disease relationships had either strong of definite evidence, eight other genes that are often discussed in the context of epilepsy had either limited evidence or were disputed. This emphasizes the need for systematic evaluation of the available evidence for all genes suggested to be related to human epilepsy as a critical step for developing novel therapeutic approaches. Expanding the gene curation to a set of 100 genes and moving towards variant curation will be the next steps for our panel.