Epilepsiome. Within the new structure of the ILAE Genetics Commission, the Epilepsiome has become a Task Force for the current term. Our blog has accompanied the developments in the field of neurogenetics for the last seven years and has seen the rise of next-generation sequencing and formal gene and variant curation frameworks. This has left us with a basic question: what is left to say? Should the future Epilepsiome simply chronicle what is happening in the field or should we try to use our platform to develop novel and potentially provocative thoughts? Within the current Epilepsiome Task Force, we decided to try the latter. There has been much attention paid to, and understandably much excitement about, the prospect of targeted precision treatments based on specific gene mutations. But could this be a Potemkin village based on unrealistic treatment expectations? What else is happening in the field of epilepsy genetics, outside the spotlight? We agreed that the new Epilepsiome Task Force will strive to emphasize a richer, globally oriented, and multifaceted view of the genetic basis of human epilepsies and neurodevelopmental disorders. Here are the three things that our Task Force hopes to accomplish. 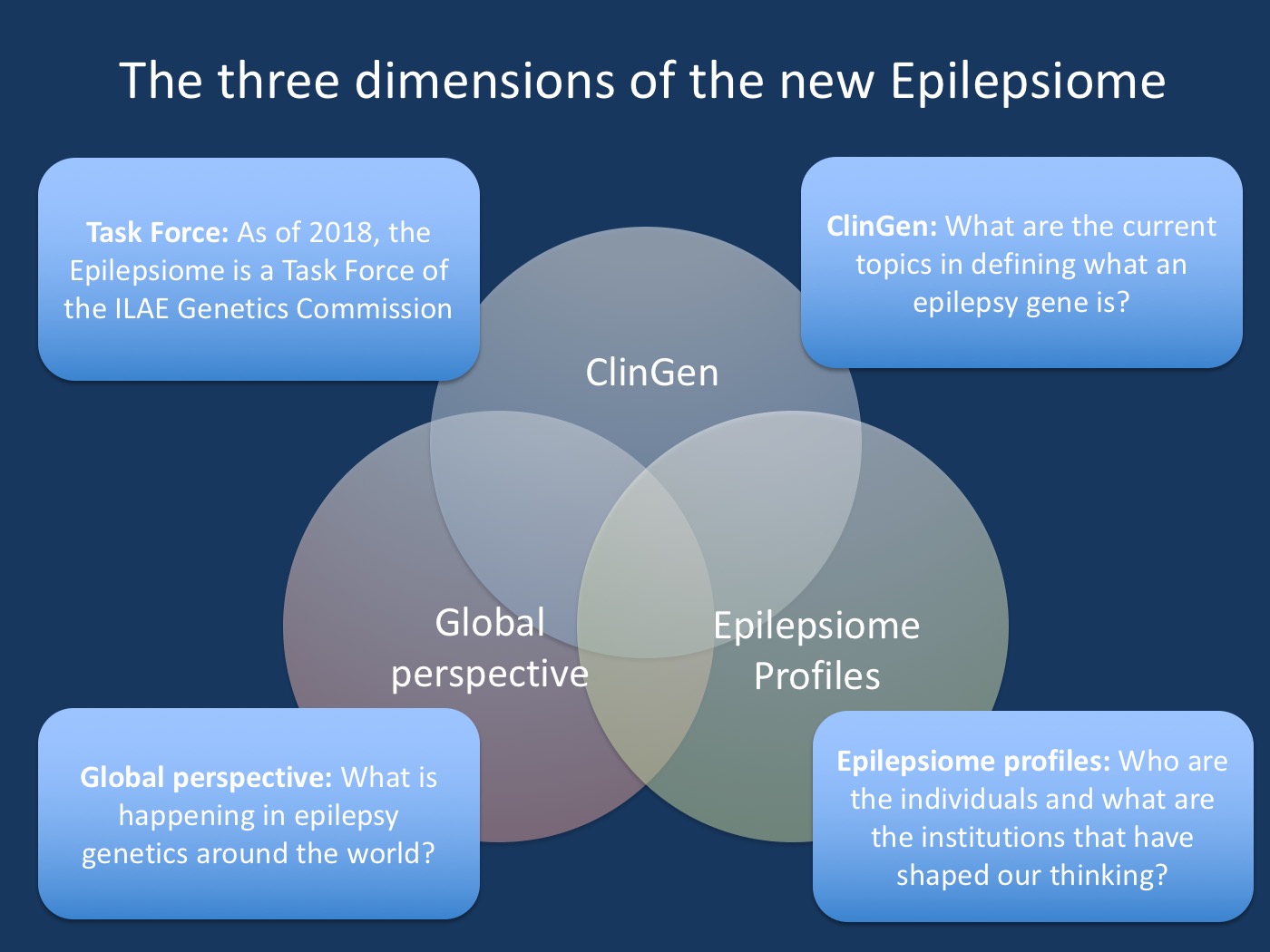 The new Epilepsiome. This chart should demonstrate our thoughts about the current challenges that we have identified for the ILAE Epilepsiome Task Force. Basically, we would like connect the epilepsy world with the gene curation world (ClinGen), explore epilepsy genetics around the globe (Global perspective) and try to understand what is happening behind the scenes (Epilepsiome profiles).

The new Epilepsiome Task Force. The ILAE Genetics Commission has four-year terms and within the current term that started this year, we were asked to work with the ILAE Genetics Commission as a Task Force, a dedicated group of professionals in the field that is tasked by the ILAE to accomplish a specific and well-defined aim. However, what should this aim be? The Epilepsiome has always been somewhat difficult to grasp. Is it an easy-to-access resource for epilepsy genetics, a formal gene review platform, or my personal science blog? In the first teleconference of our Task Force we asked ourselves the question of what our aim should be going forward. We came up with three major tasks. Basically, we would like to establish the Epilepsiome as a community of practice for the discussion of topics and trends in epilepsy genetics that would otherwise go unmentioned – a counterweight to the perception that epilepsy genetics is nothing but a precision medicine machine running at an industrial scale. Here is what we think the new Epilepsiome should accomplish.

1 – The connection to the ClinGen Epilepsy Gene Curation Expert Panel. As the genetics community has learned more about the rigorous criteria needed to definitively identify disease-causing genes, we have also recognized that many previously published genes do not meet those rigorous criteria. ClinGen is an ongoing large-scale effort of gene curation, using formal criteria to evaluate the evidence for or against the role of variants in a particular gene in causing disease. The Epilepsiome is closely connected to this effort because several Epilepsiome Task Force members are also members of the ClinGen Epilepsy Gene Curation Expert Panel. While the ClinGen expert panel produces a report for every gene that details our assessment, this format may not always capture the nuanced discussions that happen behind the scenes on the way to forming that final decision. We believe these discussions will be interesting and informative to the broader epilepsy community, and we believe the Epilepsiome is an ideal space to share these discussions. We plan to post regular updates on the progress of the ClinGen Epilepsy Gene Curation Expert Panel, and to share and explain the Expert Panel’s decisions with the broader community as they are finalized.

2 – Epilepsy genetics around the world. During my summer vacation, I managed to read Hans Rosling’s Factfulness, an in-depth exploration of global trends and an honest reminder that we are often ignorant about what happens outside the Western sphere and that some of the assumptions we have about the world outside the US and Europe is incorrect. Most of our views that we take for granted rely on facts that are more than 20 years old, and this fully applies to epilepsy genetics. There is a thriving neurogenetic diagnostic culture outside what we refer to as the Western world. In the not so far future, Asia will eclipse both Europe and the US with regards to the number of genetic tests performed. When I gave a guest lecture to Chonqing, China, last year, I asked one of the junior child neurologists how many patients with KCNQ2 he is caring for. “Twenty to twenty-five” was his answer and he was one of the younger attendings in the Division. Therefore, when I was somewhat unexpectedly asked to put together an international panel for this task force, I realized that we have the unique opportunity to present some of the efforts around the globe that are otherwise hidden to us. For example, the current developments in epilepsy genetics in India, or the massive Chinese precision medicine program with more than 10,000 patients undergoing exome sequencing.

3 – Epilepsiome profiles. Finally, we would like to revive an idea that we already discussed several years ago, but that never really came to fruition. We would like to present some of the mechanisms that move epilepsy genetics forward, some of the people and institutions behind the scenes that have had a tremendous impact on the field. Who were the people and what were the forces that have shaped our current thinking or are still in the process of doing this? For example, what were the circumstances that allowed Peter De Jonghe to discover important genes in neurogenetics such as SCN1A in Dravet Syndrome, KCNQ2 in epileptic encephalopathies, or GLUT1 in early-onset absence epilepsy? What happened to the RES consortium and to Epi4K? What obstacles and resistance did new concepts such as GEFS+ meet before they became widely accepted? Have there been tendencies and directions in epilepsy genetics that simply went nowhere and what can we learn from this? You would probably agree that none of these topics would ever make it into a typical review article, but that these questions may be extremely informative for us to move forward.