Conventional wisdom. Trio whole exome sequencing has been successful over the last five years in identifying underlying genetic etiologies in nearly 50% of patients with epileptic encephalopathies, which is largely owing to the genetic architecture of these conditions. The vast majority of these genetic epilepsies are caused by apparent de novo variants that are present in the patient but not in the mother or father. The conventional wisdom is that the recurrence risk in future pregnancies for parents of an affected child is low to non-existent and traditionally we have quoted a ~1% recurrence risk for future pregnancies. However, a new study published in the New England Journal of Medicine turns this conventional wisdom on its head, identifying detectable somatic mosaicism in approximately 10% of parents tested, which has implications for how we counsel families of children with epileptic encephalopathies – and potentially other genetic conditions due to de novo variants as well. 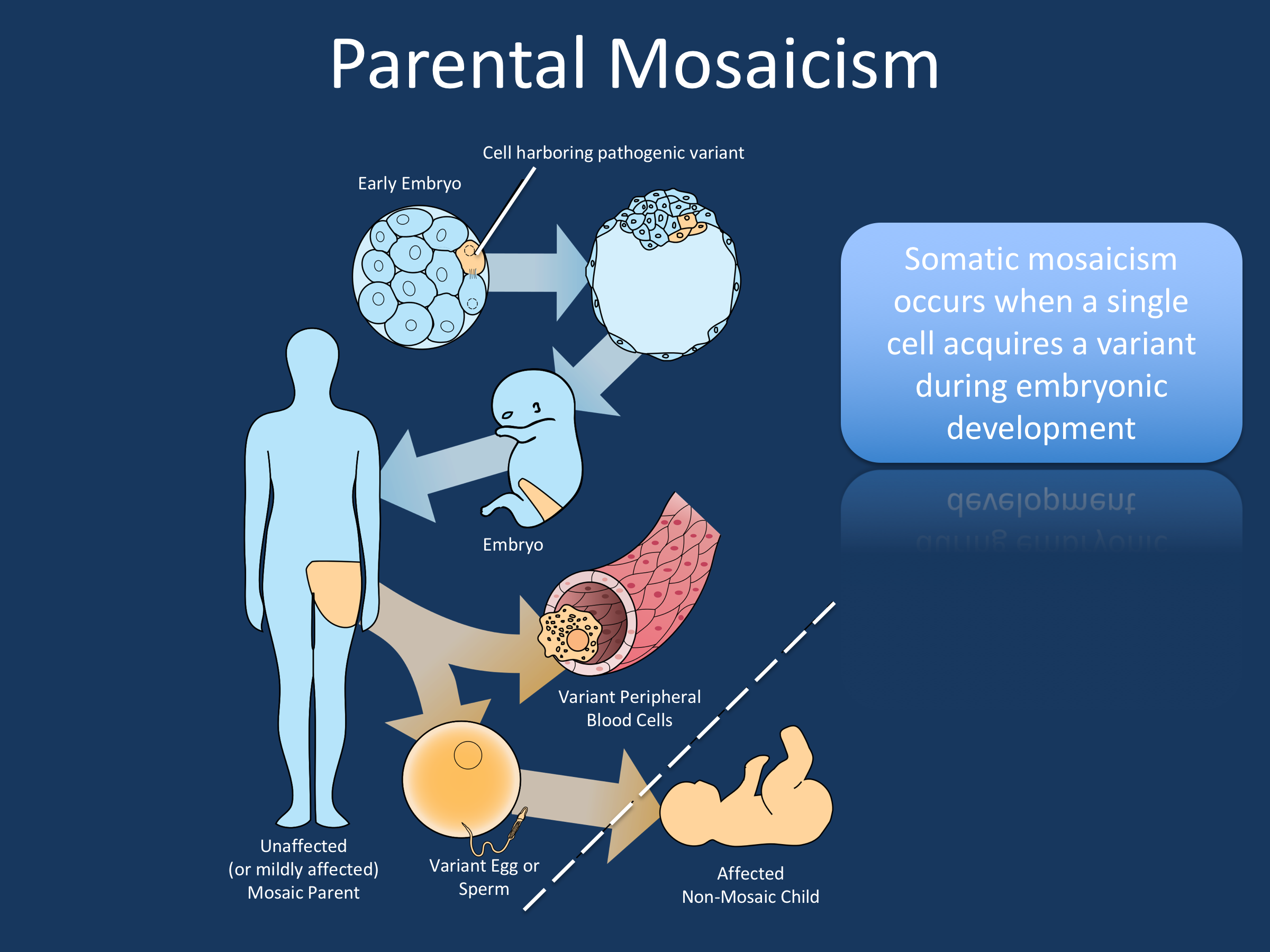 Mechanism of Somatic Mosaicism. Early in embryonic development of the parent, a single cell spontaneously acquires a pathogenic variant. Every cell that arises from that single cell also carries this pathogenic variant, but all other cells in the embryo do not. The presence of two distinct cell populations in the body is referred to as “somatic mosaicism”. The somatic mosaic parent is typically unaffected or mildly affected. The pathogenic variant is also present in the sperm or egg cells and can therefore be passed on to a child during pregnancy. This child has the pathogenic variant in all cells in his/her body and is affected and non-mosaic. Because the pathogenic variant is present in the sperm or egg cells of the mosaic parent, there is a chance that future pregnancies may also be affected [modified from https://commons.wikimedia.org/wiki/File:Parental_Mosaicism.svg under a CC VY 3.0 license]

Higher risk than previously thought. Myers and colleagues performed an assay called single-molecule molecular inversion probes, looking at 33 specific genes in patient-parent trios, where a child is affected with a confirmed genetic epileptic encephalopathy. Single-molecule molecular inversion probes have the advantage of being highly specific to the target of interest and, importantly, being able to detect variants occurring at very low frequencies, which traditional methods such as Sanger sequencing are unable to do. Testing DNA extracted from blood or saliva, Myers and colleagues identified mosaicism for the genetic variant in a parent from 10/120 families. Parental mosaicism was found in approximately 10% of families with children with an apparent de novo SCN1A variant, consistent with previous findings. Parental mosaicism was also found in CACNA1A, DNM1, GNB1, KCNT1, KCNQ2, SCN8A, and SLC6A1. Two additional families had inferred mosaicism due to a second affected sibling also carrying the pathogenic variant found in the proband (SYNGAP1, KIAA2022) but no variant detected in the parents. Altogether, 12/120 (10%) families had evidence of parental mosaicism, which is 10x higher than the risk of mosaicism that is traditionally quoted when counseling for de novo variants. Four of the twelve mosaic parents had reported a previous history of seizures, including febrile seizures, which was milder than their affected child’s phenotype. Importantly, in 6/12 families, a second affected sibling also carried the same variant as the proband.

Mosaicism explained. When we refer to “mosaicism” in genetics, we mean that a person has two or more unique cell populations. In this case, the parent of an affected child has some cells that do not carry the pathogenic variant and a small proportion of cells that do carry the pathogenic variant. The variant in the parent likely occurred spontaneously in a single cell when the parent was an embryo, and all subsequent cells that arose from that cell also contain that genetic change. Because the mosaic parents all have affected children, the variant is presumed to be present in gonadal tissue as well, although it is not possible to test this tissue to confirm. Myers and colleagues tested DNA from peripheral blood and saliva tissue from parents and found highly variable levels of mosaicism, ranging from 1.4-30%. It’s possible that other mosaic parents were not detected because mosaicism may be present in other untested tissue types.

Counseling and practical implications.The genetic counseling implications from this study are significant. As genetic counselors and physicians who counsel families with apparent de novo variants, we need to consider how we approach these findings and what information we provide to families. The <1% risk of recurrence is likely not an appropriate recurrence risk estimate anymore, especially for families who may wish to have additional children. In cases with a mosaic parent, a precise recurrence risk calculation cannot be given, but it may approach 50%, as in autosomal dominant disorders. The practical implications are that we should consider reframing the recurrence risk estimates, inform families about the possibility of undetected parental mosaicism, and offer a referral to a prenatal genetics professional for any families who may wish to discuss prenatal or preimplantation genetic testing options for future pregnancies.

Future implications. As a genetic counselor, my ideal scenario would be for these findings to spur development of a sensitive diagnostic test that could be offered to families of children with an apparent de novo variant to help better identify mosaic parents, where this information would be useful – i.e. for families who are considering having additional children and who would use this information in making reproductive decisions. This would allow us to better refine recurrence risk estimates and help identify families who may benefit from prenatal or preimplantation genetic counseling. My concern is that currently cases of parental mosaicism may not always be reported by diagnostic laboratories even if they may be suspected, since many laboratories are not validated to return this information for parents. Parental mosaicism is likely not confined to genetic epilepsies – this phenomenon is likely seen in other sporadic genetic conditions resulting from de novo variants. Further research in other non-epilepsy fields of genetics is needed to see if these findings can be replicated in other genetic conditions.

What you need to know. In a recent study in the New England Journal of Medicine, Myers and colleagues performed analysis of parental mosaicism among 120 patient-parent trios of genetic epileptic encephalopathies and identified parental mosaicism in 10% of families. Some mosaic parents had reported a history of single seizures, and in many families a second affected sibling was born who also carried the pathogenic variant. We currently quote a recurrence risk in future pregnancies of ~1% for patients with apparent de novo variants, but these findings suggest that the real recurrence risk may be as high as 50%. Referral to a prenatal genetics professional may be appropriate for a family of a child with a confirmed genetic epilepsy, if the family is considering having additional children.