Sodium channel. Voltage-gated channels for sodium ions are a crucial component of helping neurons depolarize and repolarize in a way that enables generation of action potentials. However, in order to function properly, voltage-gated ion channels co-exist in a fragile balance, and genetic alterations leading to functional changes in these channels are known causes of disease. SCN1A, SCN2A, and SCN8A have been implicated as causes for human epilepsy. However, SCN3A encoding the Nav1.3 channel, one of the most obvious candidates, could not be linked to disease so far. In a recent publication, we were able identify disease-causing mutations in this major neuronal ion channel. Interestingly, patients with an early onset and the most severe presentation had a prominent gain-of-function effect that responded to known antiepileptic medications. 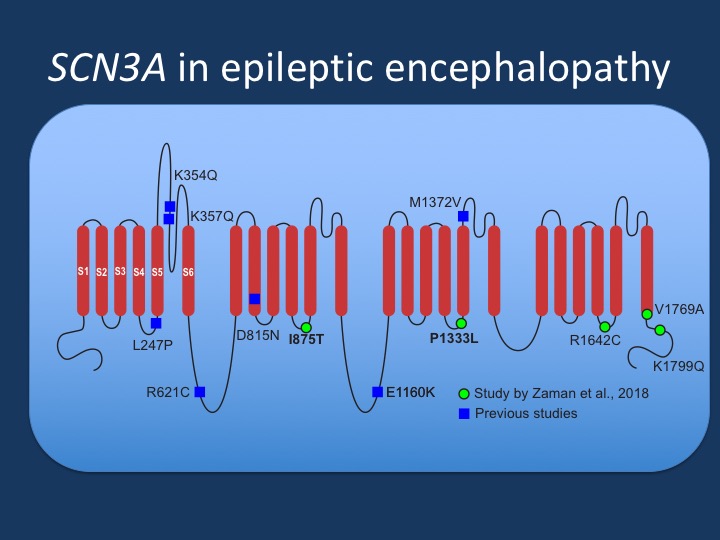 Figure. Variants in SCN3A identified in our study (Zaman et al., 2018) and previous studies. Three variants found in four patients (p.I875T x2, p.P1333L, p.V1769A) were found to be de novo. A prominent gain-of-function was observed for p.Ile875Thr and p.Pro1333Leu. Both patients with the p.Ile875Thr had diffuse polymicrogyria.

Nav1.3. Voltage-gated sodium channels play a major role in tissues involved in the generation and propagation of electrical signals, most prominently the skeletal muscle, the heart muscle and, most importantly, the brain. There are nine different sodium channels in humans and four voltage-gated sodium channels expressed on neurons including the Nav1.1 (SCN1A), Nav1.2 (SCN2A), Nav1.3 (SCN3A), and Nav1.6 (SCN8A) channels. The naming of sodium channel is often a source for confusion between scientists involved in functional studies and genetic studies. Nav1.x refers to the protein, SCNxA to the gene, but for some sodium channel genes such as SCN8A, the numbering is off.  Out of this quad of brain-specific sodium channels, three channels have been associated with epilepsy and neurodevelopmental disorders so far. SCN3A had been the missing sodium channel that was suggested in some previous studies, but never arrived at the same degree of certainty as the other sodium channels including SCN1A, SCN2A, and SCN8A. Nav1.3 encoded by the SCN3A gene is highly expressed in the developing brain, but its expression drops to basically insignificant levels postnatally.

Gain-of-function. In our recent study by Zaman and collaborators, we identified four patients with de novo mutations in SCN3A, including two patients with a recurrent variant. In contrast to previous studies, which indicated a role of SCN3A in milder neurodevelopmental disorders, the four patients described in our study had severe epilepsy starting in the first year of life. Functional studies identified a prominent gain-of-function effect of these mutations, indicating that increased channel function was the molecular mechanism behind the severe presentation in patients with SCN3A epileptic encephalopathy.

Nav1.3 expression. Looking at the expression pattern of SCN3A, this mutational mechanism is somewhat evident. For a gene with a very low expression after birth, only a significant increase in channel activity can result in hyperexcitability. Basically, in patients with SCN3A encephalopathy, the overactive Nav1.3 channel adds another sodium channel-related function that is not present in the typically developing brain – and the hyperexcitable network produces the epileptic encephalopathy. A related mechanism was shown for some variants in the SCN2A and SCN8A genes, as well, even though the mechanisms can only be compared to a certain degree. In vitro, the gain-of-function effect could be reduced by lacosamide and phenytoin, both commonly used anti-epileptic medications. This indicates that the identification of an underlying SCN3A mutation may have therapeutic consequences in some patients.