Neuronal spectrinopathies. Spectrins are a major component of the neuronal cytoskeleton, the scaffold underneath the cell membrane that gives cells their characteristic shape and anchors transmembrane proteins such as voltage-gated ion channels. SPTAN1, the gene coding for the non-erythrocyte alpha-II spectrin, has been known as a rare cause of early-onset epileptic encephalopathies with hypomyelination and atrophy. However, the full phenotypic spectrum and the range of pathogenic variants was unknown. In a recent publication in Brain, 20 patients with pathogenic variants in SPTAN1 are reported, expanding the known range of phenotypes and suggesting a very unusual disease mechanism through in-frame deletions or duplications. Here is what links the neuronal cytoskeleton to epileptic encephalopathies. 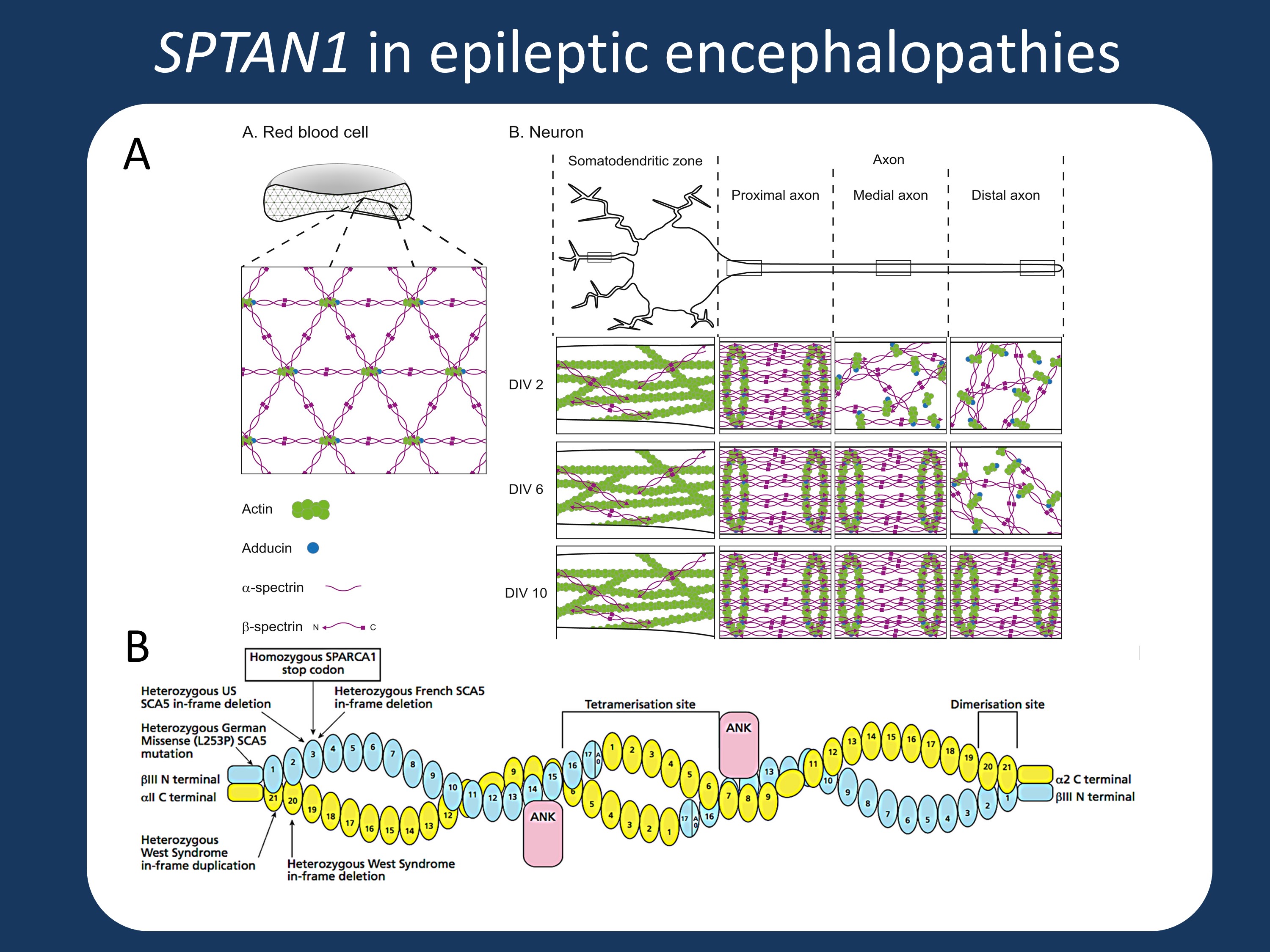 Figure 1. Neuronal spectrins and the cytoskeleton. (A) the cytoskeleton of the axon is supported by spectrin tetramers intersperse with actin rings. This regular structure can be observed in cell cultures and forms in the first week in vitro (DIV days in vitro). Spectrins are also important in providing the shape of red blood cells, even though the specific subtypes are different (from Stuart and Chen eLIFE 2015, DOI: 10.7554/eLife.06235 under a CC license). (B) Spectrins form tetramers between alpha and beta spectrins. Ankyrin (ANK) provides the connection with ion channels in the axonal membrane. The current cartoon demonstrates the position of disease-related pathogenic variants in some patients with SPTAN1 coding for an alpha-spectrin and SPTBN2, coding for a beta spectrin. Most pathogenic variants are found in the dimerization site where SPTAN1 variants have been shown to be dominant negative (from Lise et al., 2012 https://doi.org/10.1371/journal.pgen.1003074 under a CC license)

Spectrin. In order to acquire a certain shape, cells require a sophisticated scaffold underneath the cellular membrane. This is particularly true for cells like neurons, where the cellular shape branching into potentially hundreds of dendritic and axonal branches, is tightly linked to the specific neuronal function. For example, spinocerebellar ataxia 5 (SCA5) or “Lincoln ataxia” is due to pathogenic variants in the SPTBN2 gene, coding for a neuronal beta-III spectrin. Spinocerebellar ataxias are neurodegenerative disorders arising from the degeneration from neuronal pathways. Given the critical importance of the cytoskeleton, it makes intuitive sense that variants in spectrin genes may results in the degeneration of neurons over time. However, the discovery of SPTAN1 in patients with early-onset epileptic encephalopathy, hypomyelination, and progressive atrophy of the cortex, brainstem, and cerebellum questioned our understanding of how the cytoskeleton may be involved in neurological disorders.

Mutational spectrum. In the publication by Syrbe and collaborators, 20 patients with pathogenic SPTAN1 variants are described. The disease spectrum comprises the classical SPTAN1 phenotype, but also includes patients with mild to moderate intellectual disability. Interestingly, patients with variants in the end of the SPTAN1 gene, which codes for the heterodimer region, appear to have the most profound disease presentation. This particular region within the alpha-2 spectrin is important for connecting the alpha-spectrins with beta-spectrins and pathogenic variants within this region have previously been shown to be dominant-negative – in summary, this domain is so critical that any disruption to the protein helices not only makes the single copy of alpha-spectrin non-functional, it also disrupts the generation of spectrin tetramers to a degree that is more worse than a truncation in the SPTAN1 gene.

In-frame. The SPTAN1 gene is one of the few genes where in-frame deletions and duplications have been shown to be pathogenic. In the study by Syrbe and collaborators, nine in-frame deletions were identified compared to seven missense variants. This means that more than half of the disease-causing variants in SPTAN1 are due to in-frame deletions and duplications. Typically, in-frame deletions or duplications in other genes would be considered variants of uncertain significance and are often difficult to interpret; these types of variants may even be filtered out as benign variants by some analysis pipelines. In-frame variants are either deletions or duplications by three or a multitude of three base pairs, leaving reading frame of the DNA intact, but adding or deleting single or multiple amino acids. The non-erythrocytic alpha-2 spectrin SPTAN1 is unusual as it does not tolerate these in-frame changes in the region that links different spectrins together. This region requires such a well-defined amino acid sequence that even the interjection of a single amino acid may break the connection between proteins. The authors investigated some SPTAN1 variants in patient fibroblasts and demonstrate that these variants lead to spectrin aggregates – the altered spectrin is stuck in the cell and cannot properly function as a scaffolding protein.

What you need to know. The phenotypic spectrum of SPTAN1 encephalopathy is wider than previously known and particularly patients with variants outside the heterodimer region can have milder phenotypes. More than half of the variants affecting the heterodimer region are in-frame variants, an unusual disease mechanism that likely has to do with interfering with the complex structure that spectrins provide. Some of these in-frame variants are recurrent and the particular p.(Aps203_Leu2305dup) three-amino acid duplication was found in 5 patients.

One thought on “Mysteries of the cytoskeleton – SPTAN1 in epileptic encephalopathies”