KCNB1 encephalopathy. Pathogenic variants in KCNB1 were first reported three years ago in three unrelated patients with an early-onset epileptic encephalopathy. Since the initial report, individual patients have been reported with de novo KCNB1 variants, but a comprehensive overview of the KCNB1 encephalopathy clinical picture has been lacking. A recent publication by de Kovel and colleagues provides a comprehensive overview of the clinical features and genetic variants in 26 individuals with KCNB1 encephalopathy, including 16 previously unreported patients, providing novel insights into the phenotype. In this post we will unpack this publication, including what new information about KCNB1 it tells us. 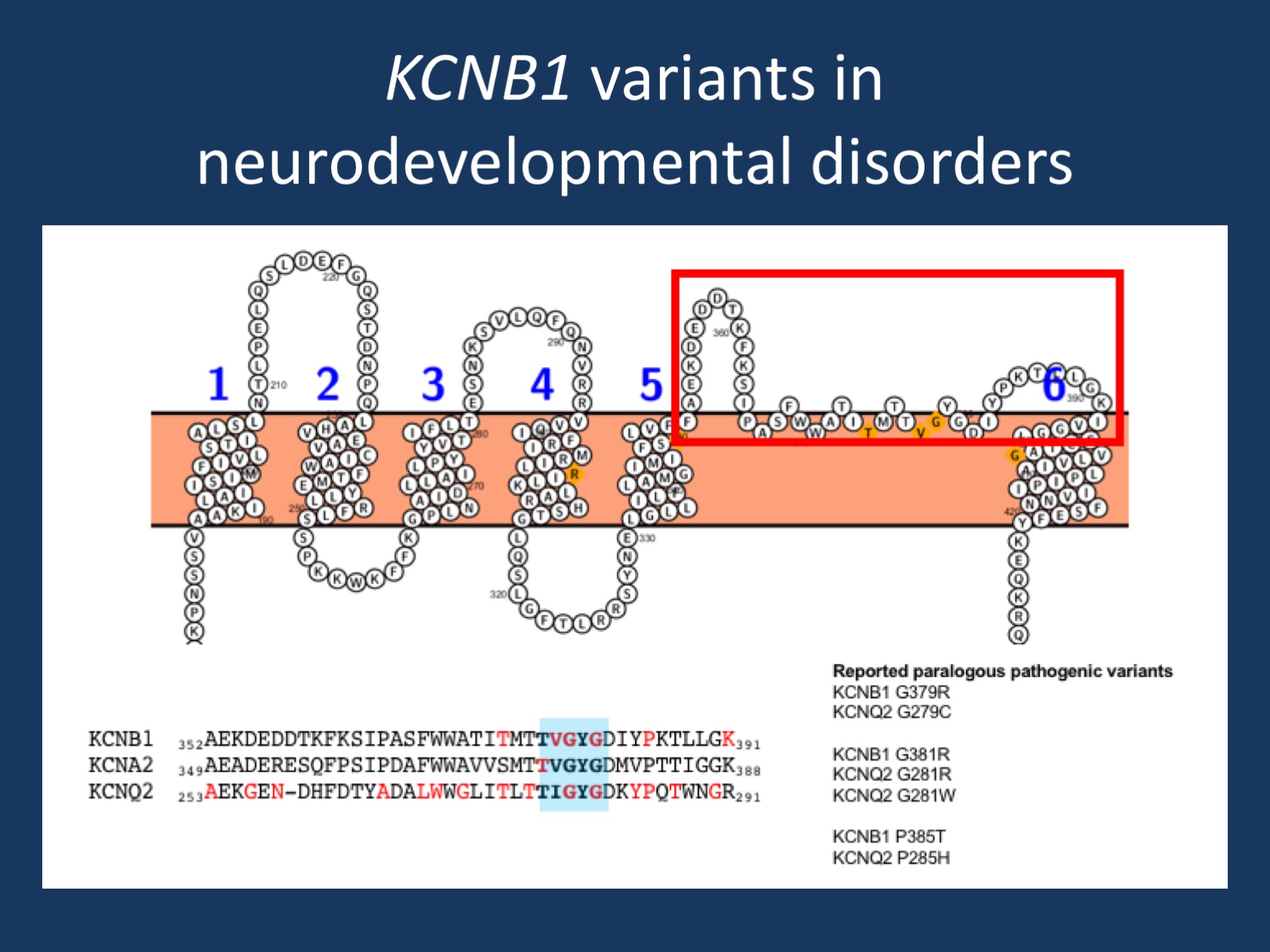 Figure. Schematic figure of the transmembrane and linker regions of KCNB1. The red box indicates the linker region between transmembrane segments S5 and S6. The sequences of this region are aligned for KCNB1, KCNA2, KCNQ2, showing high sequence homology. The blue box highlights the ion selectivity filter. Previously reported pathogenic variants affecting amino acids in each gene are highlighted in red. Paralogous pathogenic variants have been reported in this region between KCNB1 and KCNQ2, indicating that these amino acids are important to protein function.

The clinical spectrum. The clinical features associated with KCNB1 encephalopathy appear to be broad and in many ways consistent with other genetic neurodevelopmental disorders. All 26 patients reported by de Kovel and colleagues had some degree of global developmental delay or intellectual disability, which preceded seizure onset. Epilepsy is a prominent feature, present in 84% of reported patients, usually presenting in infancy or early childhood. In most patients with epilepsy, multiple seizure types are reported and seizures are refractory to multiple antiepileptic medications. Movement disorders or other motor coordination difficulties were reported in over three-quarters of patients, including ataxia, chorea, spasticity, tremor, and other extrapyramidal movement disorders. Autism, hyperactivity, aggression, and ADHD are also prominent, found in nearly 90% of reported patients. It is notable that 3 patients (ages 11y, 10y, and 4y) are not reported to have epilepsy, since previously KCNB1 variants were predominantly described in patients with severe early-onset epilepsies.

Missense and truncating variants. Although previously only missense variants had been reported in KCNB1, de Kovel and colleagues report 6 patients with de novo truncating variants. All reported nonsense and frameshift variants are located in the last exon of KCNB1, so they are predicted to produce an mRNA product that escapes nonsense mediated decay and therefore a truncated protein product. The functional effect of a truncated Kv2.1 channel subunit is unknown, although it would likely not be haploinsufficiency. Truncated protein products can be toxic to cells through mechanisms including dominant-negative effects, although the functional consequences of these specific variants would need to be investigated. Most missense variants are found in the voltage sensing S4 transmembrane segment and the S5-S6 region, which includes the pore forming region and the ion selectivity filter. Additionally, de Kovel and colleagues report several recurrent missense variants, including F416L, T374I, R312H, and R306C.

Genotype-phenotype correlations. Is there an association between the identified genetic variants and reported phenotypes? There appears to be no clear link between truncating variants and epilepsy phenotype. Of the six patients with truncating variants, 2/6 are not reported to have epilepsy and one patient with a missense variant did not have epilepsy. While truncating variants may be more often associated with non-epilepsy phenotypes, these numbers are too small to make a definitive conclusion. The most severe phenotypes, including refractory epilepsy and severe cognitive outcomes, are reported in patients with missense variants in the S4-S6 region. However, a patient with non-syndromic intellectual disability has been recently reported with a missense V378L variant in the selectivity filter in S5-S6 linker region. A variant affecting this same amino acid residue V378A is reported by de Kovel and colleagues in a patient with a severe early-onset epileptic encephalopathy. This indicates that the location of the variant alone does not determine the phenotype.

Parallels with other potassium channels. Some of the KCNB1 variants identified by de Kovel and colleagues have been reported in paralogous amino acid residues in other potassium channel encoding genes, indicating that these amino acids are important to potassium channel function. In particular, de novo variants affecting the ion selectivity filter between the S5 and S6 transmembrane segments have been reported in KCNB1, KCNQ2, and KCNA2. This highly conserved stretch of amino acids determines the ion selectivity of the channel, which means that it can discriminate between potassium cations and competing sodium and calcium cations. Altering any of these amino acids appears to be damaging to the channel and results in a disease phenotype, although interestingly not a uniform phenotype. As mentioned above, the V378A variant was reported by de Kovel and colleagues in a patient with a severe early-onset epilepsy whereas the V378L variant was described in a patient with non-syndromic intellectual disability.