E2. The advent of next generation sequencing allowed unimagined scope for large scale genetic studies. It quickly became clear that whilst new technologies could be used to solve single families, major advances would only occur by collaboration. This led to the formation of a number of Consortia – in the United States EPGP leading onto Epi4K and in Europe EuroEPINOMICS and EpiRES etc as well as a number of smaller consortia. Even with these multicentre collaborations it was clear that “bigger was better”, and attempts were made to try and synergize efforts across continents. 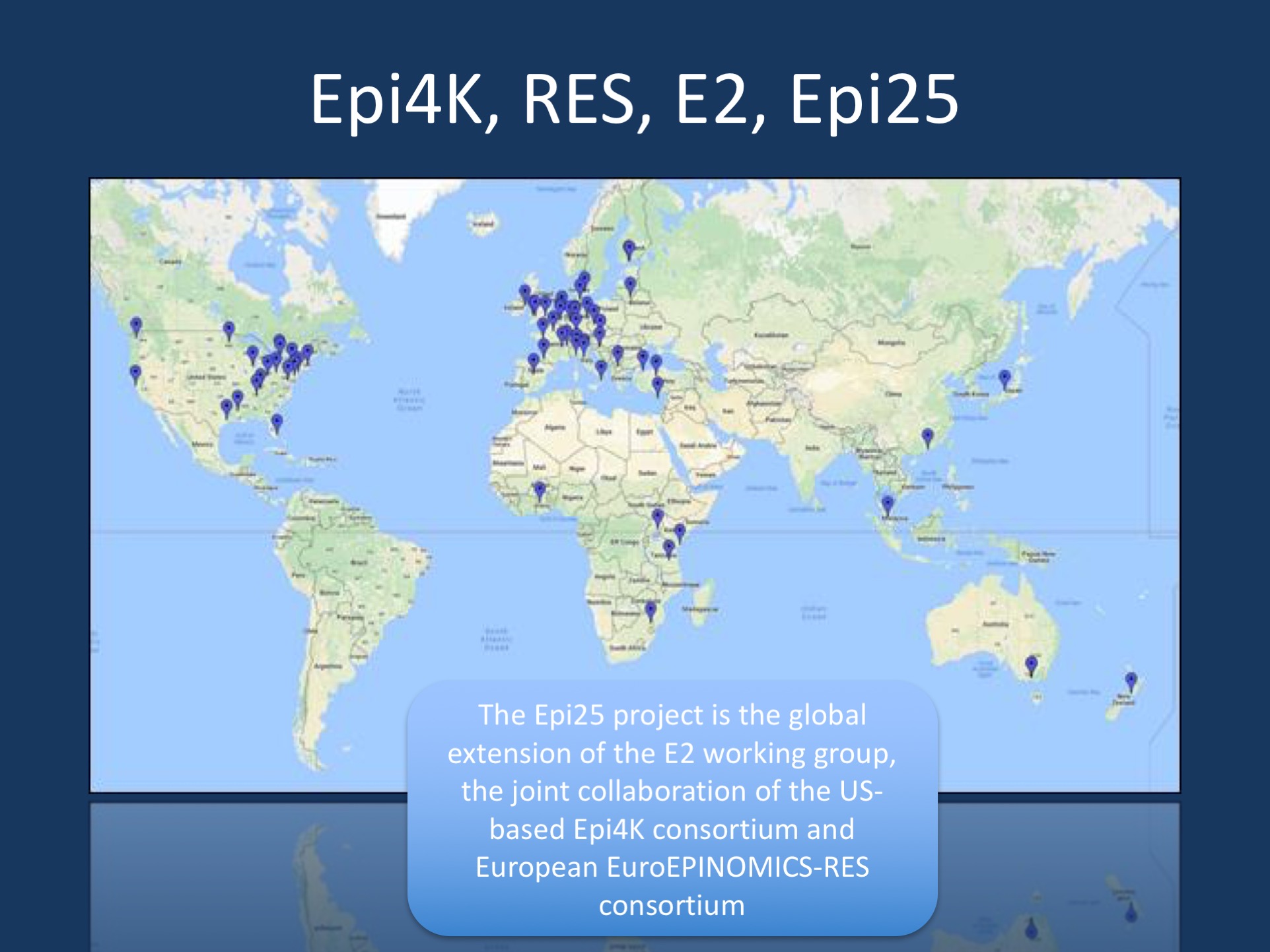 The Epi25 project is the global extension of the E2 working group, the joint collaboration of the US-based Epi4K consortium and European EuroEPINOMICS-RES consortium. The E2 working group published a landmark paper on de novo mutations in epileptic encephalopathies and the first genome-wide analysis for inherited genetic variation in epileptic encephalopathies.

Beginnings. Our first attempt at this was a workshop at the American Epilepsy Society in December, 2012, for which planning began in late 2011. The idea was that we would present data from the 2 groups. Whilst the meeting was not a disaster, it was far from ideal! We failed to communicate fully and potential issues of mistrust and concern about losing priority were evident. We subsequently resolved for this not to happen again and set up regular teleconferences that were known as “E2”. These were highly successful, performed in a collegiate manner with chairs alternating between the two of us, representing the two collaborating broad groups. It was palpable how much more openness there was, people were much more willing to collaborate and real progress was had. E2 did not interfere with individual groups pursuing their own experiments but it facilitated the aggregation of data which then was highly productive. In the end, it resulted in two substantive papers (see refs) and increasing collaboration with many direct and indirect benefits including a successful AES workshop on exome sequencing in Dec 2016 and active interaction on genetic trials registries and exome analyses in common epilepsies.

Epi25. The ultimate outcome was the formation of the Epi25 consortium, fuelled by the potential for NHGRI to fund a very large number of exomes that was far beyond the number that any one group could possibly hope to fund and sequence. Epi25 is now proceeding very successfully with over 6,000 exomes already studied from around the world. E2 served its purpose, the international epilepsy community is now working together extremely effectively and we have all learnt the valuable lessons of the benefits of collaboration, which far outweigh any perceived or real problems.

The E2 working group represented the joint collaboration of the US-based Epi4K consortium and European EuroEPINOMICS-RES consortium between 2012 and 2017. E2 was jointly led by Sam Berkovic and Peter De Jonghe. As of 2017, the E2 collaborative has transitioned into the Epi25 consortium.